Welcome to the Atlas Obscura Community discussion of Berliner Weisse. Ask questions or share tips, experiences, pictures, or general comments with the community. For the story behind this food, check out the Atlas Obscura entry: 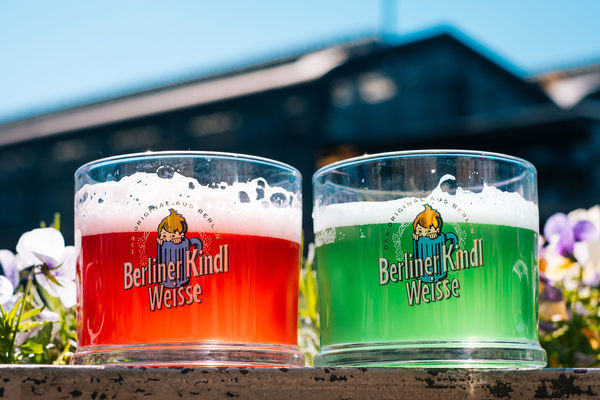 You Can Still Try the Beer That Napoleon's Troops Called 'Champagne'

Mostly correct, but I would like to add two details.
Weißbier is a synonym for Weizenier, but the origin is different. Weizenbier is made with a certain amount of Weizen (wheat) which clashes with some versions of the Reinheitsgebot which requires barley. The modern interpretation is less strict and allows all sorts of grain. Weizenbeer has up to 70% of wheat, but often less.
Weißbier is a result of the yeast which is “obergärig”. The yeast swims on top and produces a white foam, hence the Weiß=white. Lager beers or Pilsner use “untergärig” yeasts which sink to the bottom.
The text states that Weiße is is green, that’s wrong. Normally you are asked “Green or red” as you can see on the second picture.
And finally: the glasses are wrong. While the second picture shows glasses from the Berlin Weiße brewery, which is correct, they are not traditional. The other picture shows the Weißbier or Weizenbier glass which is never used for Berliner Weiße. The traditional glass looks like a bowl with a foot. And the straw is mandatory.