Welcome to the Atlas Obscura Community discussion of Biltong. Ask questions or share tips, experiences, pictures, or general comments with the community. For the story behind this food, check out the Atlas Obscura entry: 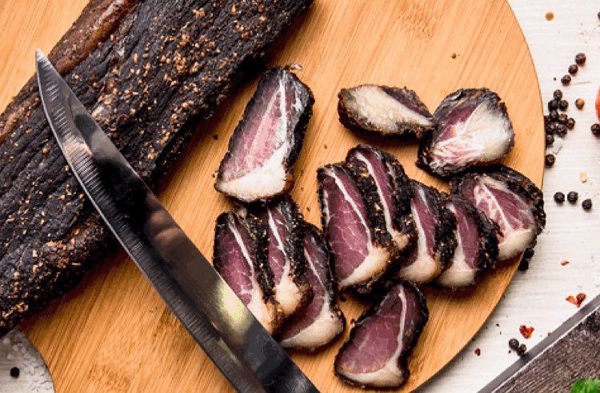 Jerky Is Kind of a Big Deal in South Africa

The spiced strips of dried game go by "biltong."

As an “Anglo-African” I shudder when I hear biltong compared to jerky. Biltong is air dried, while jerky is cooked meat. It’s like comparing steak tartare to hamburger. You usually need to hang it for a week or more before it’s ready. Also, red meat only - game, beef, ostrich. Some people are doing it with chicken, but that’s an abomination. Generally, we don’t get turkey here.

The clarification is appreciated. I visited South Africa last year and had the pleasure of sampling biltong for the 1st time in Cape Town, and all the varieties I tried were delicious. I found it much more delectable than jerky and your comments helped me better understand why.

Biltong is the soul food for meatlovers,
Game should be on the dry side ,
whilst beef needs the still red centre after wind drying, never through heating.
my personal preference is still with some roasted coriander seed and white pepper , for variety a sprinkling of crushed chillis ~ Smaaaklike Padkoes !