Welcome to the Atlas Obscura Community discussion of Blue Moon Ice Cream. Ask questions or share tips, experiences, pictures, or general comments with the community. For the story behind this food, check out the Atlas Obscura entry: 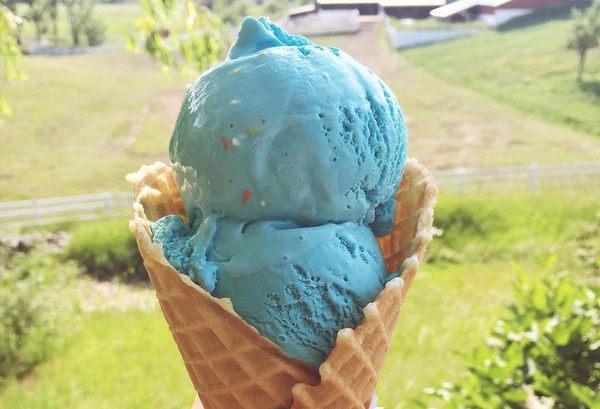 The notes mention the key difference between Blue Moon and Smurf Ice Cream being marshmallows in the latter, but I’d like to add that this is not the case everywhere in the world. In Germany blue ice cream of mysterious flavour is also popular (especially with kids) and usually known as “Schlumpf” (smurf) flavour, but it doesn’t contain any marshmallows (possibly because they were pretty hard to get in the past). It’s also sometimes called “Himmelblau” (sky blue) or even “Bubblegum”. All of these are the same thing though, just differing slightly in flavour from shop to shop.

The article says “Petran owns the patent to the original Blue Moon recipe.” But that can’t be correct, it must be that it’s held as a trade secret. If it were a patent, the information would be in the public domain already, you’d just be forbidden from replicating it until the patent expires. Also, I don’t think recipes are patentable at all. You could patent a device for, and perhaps a novel method for, preparing a food product. But a recipe? Nah. You might be able to copyright the text of a recipe, to prevent people from profiting by selling substantially-identical instructions in a cookbook (though you’d have to demonstrate that the thing you were trying to copyright was, itself, not substantially identical to stuff people have previously shared). But I don’t think once the recipe is public, you can prevent anyone from making an exact copy-cat and selling the product.