Welcome to the Atlas Obscura Community discussion of Carcass Beach in Calipatria, California. Ask questions or share travel tips, experiences, pictures, or general comments with the community. For the story behind this place, check out the Atlas Obscura entry:
https://www.atlasobscura.com/places/carcass-beach?utm_source=atlas-forum&utm_medium=referral

I thought all sand was the result of crushed bones of sea animals.

“unsustainable for any life”

Not correct. Some fish can survive in the Salton Sea, and it has become a major resting area for migrating waterfowl. 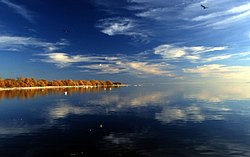 Due to the high salinity, very few fish species can tolerate living in the Salton Sea. Introduced tilapia are the main fish that can tolerate the high salinity levels and pollution. Other freshwater fish species live in the rivers and canals that feed the Salton Sea, including threadfin shad, carp, red shiner, channel catfish, white catfish, largemouth bass, mosquitofish, sailfin molly, and the vulnerable desert pupfish. The California Office of Environmental Health Hazard Assessment has develop...

Occasionally there will be a major bird die-off, I forget the cause, maybe an increase in pollution runoff or maybe a bloom in botulism bacteria or something like that.

But the fact that there are occasional major incidents of dying tell us that there’s life in and on the lake.

Some sand is indeed calcium carbonate from dead sea animals but even more common is sand that’s made of silica. And sometimes sand is made up of other materials e.g. the sand at White Sands National Monument in NM is made of gypsum.

Hi! Thanks for the clarification and apologies for the overstatement. I’ve softened the language in the place page to say “inhospitable to most life.” If you have any other edit you’d like to suggest, you can add them at any time via the “Edit” on each place page. Thanks again for letting us know!