Welcome to the Atlas Obscura Community discussion of Carn Brea Castle in England. Ask questions or share travel tips, experiences, pictures, or general comments with the community. For the story behind this place, check out the Atlas Obscura entry: 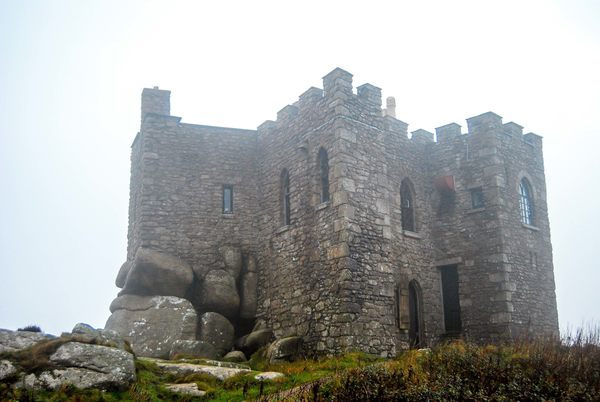 A 14th century castle built on the seat of a mighty giant.

“The giant John of Gaunt is said to have inhabited Carn Brea, and his legend lives on through rock formations called the “giant’s coffin”, “giant’s head and hand”, “ giant’s wheel” and “giant’s cradle.” Upon one of the hill’s most legendary sites, the “giant’s seat,” stands the somewhat spooky Carn Brea Castle.”
Please explain who this giant John of Gaunt is. I can find no references to a legendary giant by that name. The only John of Gaunt I know of was the Duke of Lancaster(6 March 1340 – 3 February 1399). He was the third son of King Edward III of England. John campaigned with his elder brother Edward of Woodstock, known as the Black Prince and participated in many of the battles of the Hundred Years War. He also served a regent for his nephew Richard II.
Apparently there is a suit of armour attributed to John of Gaunt In the Tower of London collection which would fit a man 6’ 9" tall. However, the provenance is doubtful.

The entry has the following website as a source, and the Giant is mentioned there too:

Carn Brea Castle was first built around 1379 AD as a chapel to St. Michael and is perched on the ominous grey boulders of the eastern tor of Carn Brea Hill. Around 1790 the building was converted into a castle folly by the Basset Family who once...

Yes, it mentions a giant supposedly named John of Gaunt. But it does not answer who this legendary giant was. The historical John of Gaunt was called that because he was born in St. Bavon’s Abbey, Ghent, Belgium. In Middle English Ghent is often spelled Gaunt.

@David_Hall I believe this is more folklore than anything. The castle was constructed around 1379 as a chapel to St. Michael. Later it was converted to a castle of sorts for the Basset Family. I believe they used it as a hunting lodge. The giant story I believe derives from the legends of the Giants of Cornwall. That suit of armor authenticity is doubtful but i wouldnt be surprised if they knew of that legend and created that armor to bolster the real John’s legacy. I’ve added a caveat to the entry to denote that this is more than likely a legend. Thanks for all the info and interest!

Always feel free to discuss more or if you find some other connections. I found this in the
The Western Antiquary; Or, Devon and Cornwall Notebook: Volume 1 January 1, 1882. 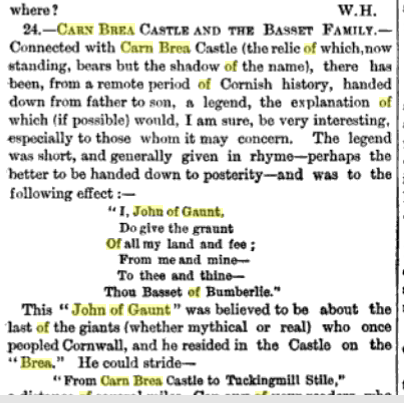