Welcome to the Atlas Obscura Community discussion of First Cemetery of Athens in Athens, Greece. Ask questions or share travel tips, experiences, pictures, or general comments with the community. For the story behind this place, check out the Atlas Obscura entry: 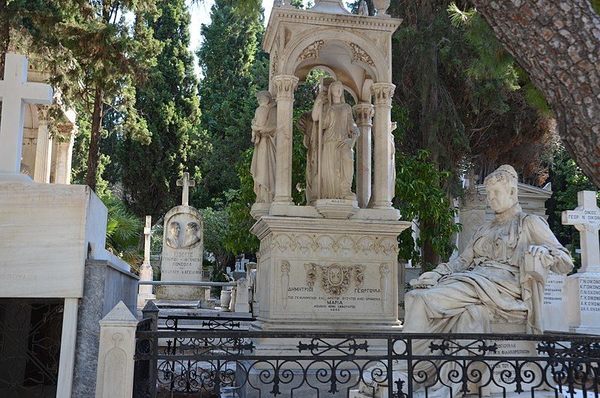 The oldest cemetery of modern-day Athens blends the modern and ancient worlds.

Visited the First Cemetery just this past March and it’s a fascinating place! I had a mission: find the tomb marker for an American film director, Jules Dassin. His tomb is behind that of his wife, Melina Mercouri, who was a famous Greek singer, actor and politician. I even laid a white rose on Jules’ gravesite – he directed one of my favorite films, the 1959 Rififi about a Paris jewel heist. I was able to buy the rose from a vendor just outside the main gate – actually, they gave it to me for free since the smallest currency I had was €20 bills.

However, there’s TONS to see in this place – I wish I’d had about another hour to walk through the rest of it! It reminded me of Pere Lachaise in Paris – lots of above-ground tombs with chapels and sculptures.

One of the more interesting things I saw was a tall, skinny priest who was walking around a path, seemingly blessing a few graves. As he walked toward me, he pulled out his cell phone and started tapping on it!

I took the hard path to get there: I walked from the subway stop near our hotel and it was a moderately rough climb up several side streets – be prepared for it, wear comfy shoes! Also, many of the street signs in Athens are in Greek or are faded so it can be hard to follow them. GPS might be your best bet!

Awesome! Thanks for sharing your adventure and for the tips