Welcome to the Atlas Obscura Community discussion of Frieze of Lions in Saint-Germain-en-Laye, France. Ask questions or share travel tips, experiences, pictures, or general comments with the community. For the story behind this place, check out the Atlas Obscura entry: 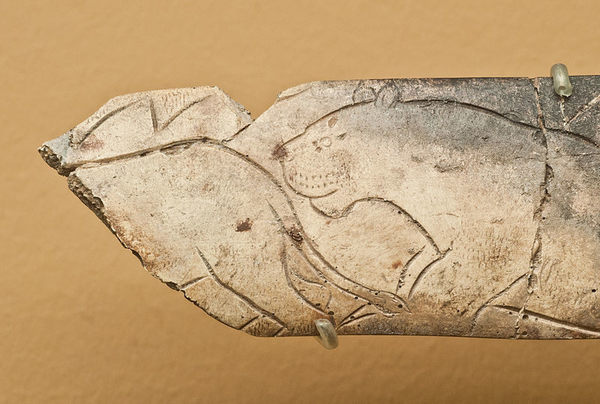 This pair of running lions engraved on animal bone is one of the earliest artistic depictions of big cats.

Thanks for a wonderful topic. Please note the slight contradiction in which the cave lions were said to have become extinct 13,000 years ago, while this exquisite artistic depiction of them is 11,000 years old. One or the other date is off a bit. Actually I suspect that a few scattered cave lions persisted to later times, more recently than 10,000 years ago, but without any remaining traces discovered yet.

Thank you for the reply Mike !

Also , thank you for your kind words. I saw this particular artifact when it was part of the British Museum’s exhibition “Ice Age Art: Arrival of the Modern Mind” a number of years ago and it has lingered in my mind ever since so writing about it was long overdue.

I see , yes I think I may have got the date wrong for one of those , I will definitely look it up and make any corrections to the text.

I’m glad you mentioned that because I was wondering something similar about the lions. I think I remember reading in a Nat Geo mag a couple of years ago about remains that indicated that there were several mammoth refugium in the Russian Far East that survived well into Neolithic times. If megafauna like mammoths could do it with their large body size and metabolic requirements, and considering the continuity of game like bison and reindeer which shifted range to the far North, it would seem likely that lions and other Quarternary carnivore species also continued in low population densities to survive by hunting these.

Hey @mikegprice and @Monsieur_Mictlan. Thanks for the catch! We’ve gone in and adjusted the dates. Thanks again for the great place and the keen eye for detail!

Dear Monsieur Mictlan,
Your insightful reply is most highly appreciated.
We’re really very lucky this artifact with wonderful artwork has survived and is available to the public. We’ve undoubtedly lost over 99.9% of the aesthetic output of our predecessor peoples, because of the ephemeral nature of their materials, the action of the elements, and millenia of vandalism.
What do you think about even contemporary Chinese art showing lions, long after their disappearance from that region? Of course their art lions are fanciful in appearance, virtually mythical.

Oh I totally agree , I am thankful that some of these artifacts and the cave paintings have survived and that at least some of them can be seen by the public in museums or archeological sites.

I think it is extremely interesting how prominent lions are as symbols in Chinese and Tibetan culture. As far as I know and I’m definitely not an expert on this , the Asiatic lion was historically native to some nearby regions like Iran /Persia and India (maybe Pakistan and Afghanistan too ?) so knowledge of it in Ancient Chinaand perhaps even live specimens could have come from those regions.

I’m curious, what is your opinion on the presence of lions in Chinese art ?

Certainly in later Chinese history lions were being commonly kept in captivity. I remember reading , although I can’t remember exactly where , a very funny annecdote that really made me laugh out loud. It was about a Chinese Emperor in Medieval China who upon receiving a diplomatic gift of yet another lion from a Persian or Arab ambassador was recorded as having a meltdown and saying or writing something to the effect of : “No more bloody lions !!! I’ve got more than I know what to do with and they crap everywhere !!”. There is just something hilarious about the image of a Chinese Emperor’s palace being full of gifted lions and their crap , hahaha.