Heading to NC at the end of February!

My wife and I are heading to NC the last week of February and the first few days of March. We are looking for unique places to visit.

Some things I had in mind are breweries, unique landmarks and any festivities. Heck, I might even consider a museum

Anyhow, does anyone have any suggestions on unique places to go and places to eat? We don’t have a specific location at this point but it’d be nice to see what is out there before we make our final itinerary.

The Atlas Obscura video team worked on a sponsored short about The Biltmore Estate in Asheville and I’ve wanted to visit ever since. Full-disclosure: the video was a piece of sponsored content with Discover Asheville, but reviewing the footage that didn’t make the final cut and learning more about the estate during production definitely got me interested in a visit.

The Biltmore looks like a great place to spend an afternoon and seems like there’s something to scratch any itch (falconry lessons, electric tricycle tours of the ground (what), a winery, and many guided tours.

That’s sound like a great idea, I’ll present this to my wife and see what we can find out! Thank you!

Asheville is a beautiful city, and it would be a great place to stay for your visit.

There are TONS of breweries all throughout the city; according to the Asheville tourism website, it has “more breweries per capita than anywhere else in the U.S.” Its beer scene is well known and has had dozens of articles written about it: 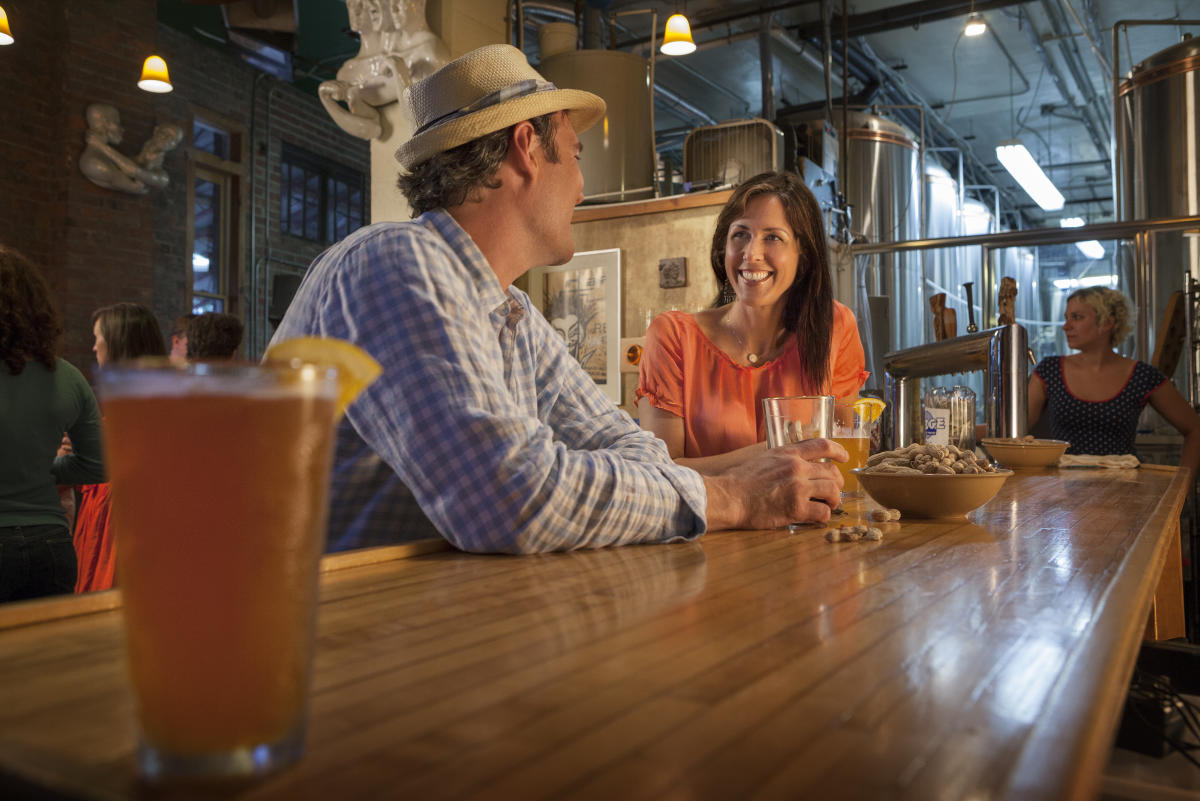 Asheville has the most breweries per capita in the U.S. Find great beer festivals, tour local breweries and distilleries and taste Asheville's best brews. 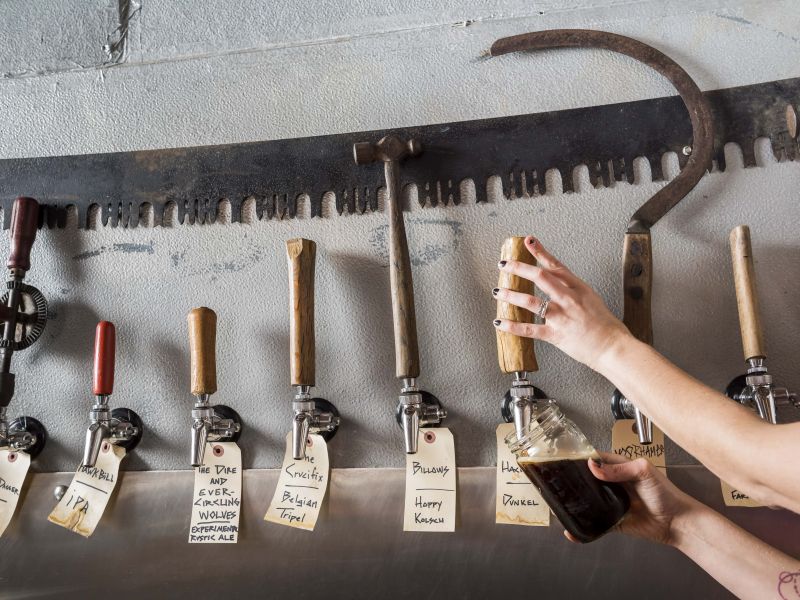 Asheville has long been a bucket-list beer destination, and with good reason. Take a tasting tour including Wicked Weed, Burial, Oskar Blues, New Belgium and more of the region's 25-plus breweries.

As for unique landmarks, Asheville is a hotbed of interesting architecture, with many of the buildings in its skyline dating back to the 1920s. It’s especially well-known for its Art Nouveau, Beaux-Arts and Art Deco buildings. The Grove Park Inn would also make for a great visit! 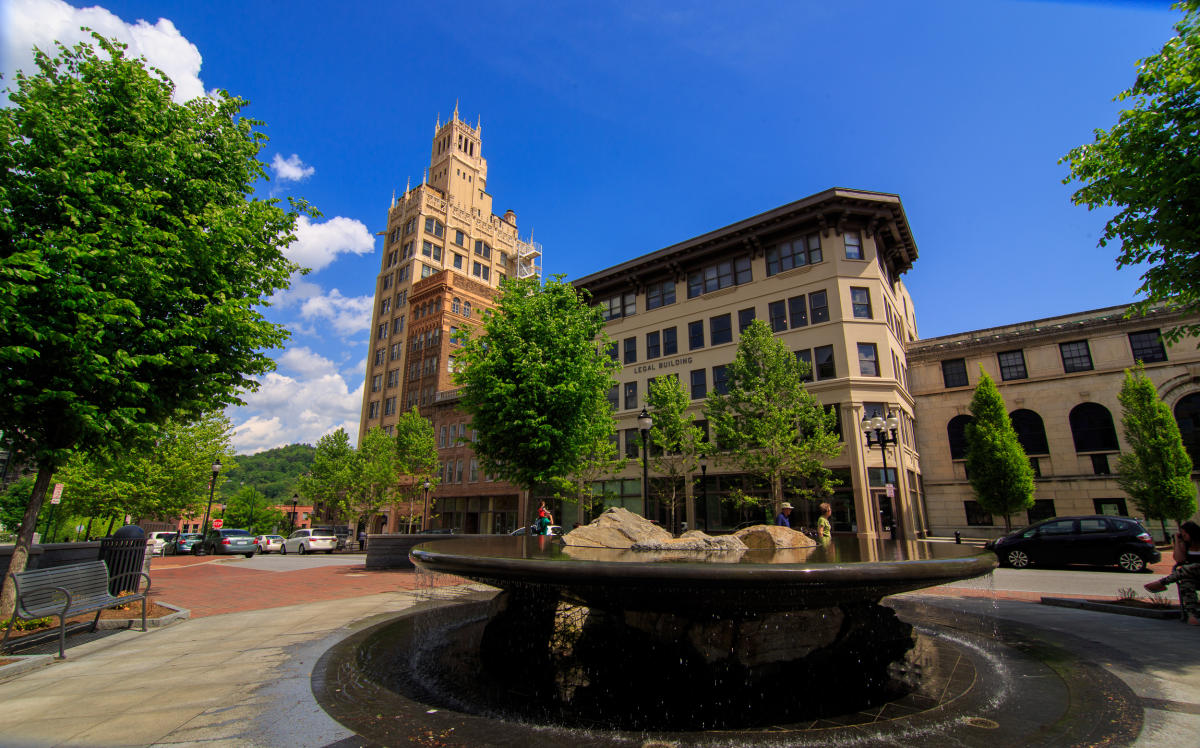 The Asheville Architecture Trail is a street guide to exquisite 1920's buildings saved by the Depression.

If you’re an outdoorsy person, Asheville is also ideal because you can escape into nature easily. You have the downtown feel if you want it, but just a few minutes outside of town, you’ll feel secluded.

As far as restaurant recommendations, I always make a point to eat at the Noodle Shop. It’s located on the square downtown, and is likely some of the best Chinese (American) cuisine in the south. But Asheville is a town full of passionate foodies with locally-sourced goods on nearly every menu, so you won’t have any trouble finding a place to eat!

I’ll drop a plug for barley’s taproom in Asheville. Good buddy used to work there, and if it’s still there Tupelo Honey is a great cafe.

The Downtown Inn and Suites used to be an awesome, cheap place to stay. I was there this summer and now that it’s Ashevegas the joint is about twice what it used to cost for a night. Still really convenient.

The Grey Eagle and Orange Peel are a few of my favorite places to see shows on the east coast, too.

Which would you rather see, mountains or the beach?

If you go for mountains, Asheville is a must. Boone is also a cute college town a couple hours north of it. As others mentioned, Biltmore is in Asheville, and it is truly worth visiting.

If you go for beach, I recommend the Outer Banks–you won’t get to swim much of anywhere along the coast this time of year but it’s still beautiful to walk along and enjoy the scenery. There’s also a lot of little neat spots like old light towers, some aquariums, museums, etc.

If you go for the Triangle area (Raleigh-Durham-Chapel Hill), there’s really not much I would consider unique. There are, however, a lot of breweries and bars to visit since all 3 towns hold some familiar universities.

I’m partial to Full Steam Brewery in Durham myself.

I grew up in NC, so my two cents: the mountains have the most things that would be of interest to people who frequent Atlas Obscura. Also be sure to try Bojangles (fast fried chicken) and cheer wine!

What part of North Carolina and where are you coming from? Are you driving or flying?

If you do go to Asheville, I would highly recommend going to Cherokee as well. It’s about an hour away.

I have visited a few parts of NC. I agree with the other comments here - the Asheville area is one of the most special. The drive there is incredibly scenic, especially if you take the Blue Ridge Parkway.

Here are a couple of other areas I find unique, just in case you are in the state long enough to explore:

Winston-Salem -
It’s a small city but quirky and unique in several ways. It still has some classic older architecture including one impressive art deco tower downtown. It’s an artsy place, especially Trade Street which has an eclectic mix of unique bars and shops. There’s a retro 80s arcade bar called Reboot that is simply a blast. It’s also odd to see the cigarette industry history all over the city as well as the current Reynolds offices, something you don’t see just anywhere. And, my favorite of all, it’s home to one of the two major Moravian settlements in the U.S. (the other being in Bethlehem, PA). The Moravian community is well preserved and is a fantastic visit with tons of museums and educational opportunities. We enjoyed visiting over the summer and learned a ton.

High Point -
NC used to be renowned for its furniture industry, and the High Point region is a focal point of that furniture legacy. In High Point itself you’ll find “The World’s Largest Chest of Drawers” which is part of an office building painted to look exactly like its name suggests. There’s a free admission history museum in town where you can learn more about the furniture industry in the area. Nearby in Jamestown NC you’ll find an enormous furniture store with a massive statue called “World’s Largest Highboy Dresser”. And while you are in the area check out Thomasville NC which is a very small town in a beautiful state of decay and decadence from the old days of furniture prosperity, where there is yet another unusually large piece of furniture called “The Big Duncan Phyfe Chair”.

Oddly enough, in both Winston-Salem and the High Point region you’ll notice a lot of Greek restaurants and stores - I read that apparently they immigrated to NC years ago during the furniture boom and so there is a large presence of Greek people in NC. So if you get tired of NC bbq, check out some good Greek food in the area.

North Carolina has a lot to offer.

FWIW, I’m a transplant from Western NY State, but have lived here for more than 30 years, in Cary, a bedroom community of Raleigh, the state Capital.

Suggestions for Asheville are spot on! Wonderful area!

Raleigh has a really nice science museum, NC Museum of Natural Sciences, and a couple other museums; History (also in downtown) and NC Museum of Art (slightly out of downtown on Blue Ridge Road.

Durham has the Museum of Life and Science, the Nasher Art Museum at Duke Univ., and a Tuba museum.

Nearby in Asheboro (very close to the center of the state) is the NC Zoo; very highly rated! It’s over 500 acres.

Back in the mountains is the Blue Ridge Parkway (which may give you trouble during end of Febr.- early March).

In Greensboro is the International Civil Rights Museum; Greensboro was the site of a sit-in at the Woolworth’s lunch counter in the 1960.

Down at the coast (but think first, it’s a lonnnng coast!!) you have Kitty Hawk, Cape Hatteras, the NC Aquarium and Fort Fisher.

The craft brewery scene is all over the state; so is wine. A couple falls ago my wife & I did a lot of wineries in the Yadkin Valley area, just west of Winston-Salem. Also down east in Duplin County, and others. Good stuff, all over.

New Bern (pronounced NewBern locally)(and Durham sounds much more like Durmm than Dur-ham) has Tryon Palace, a reproduction of Governor Tryon’s Palace when NC was a colony.

Vollis Simpson Whirligig Park in Wilson, NC. I thought it was very unique, I loved it.
http://www.wilsonwhirligigpark.org/