Welcome to the discussion thread for the story, In Laos, Former Monks Return to Buddhist Temples as Tour Guides. You can share your comments and thoughts about the story in the conversation below.

Why not do this all over SE Asia (save India)??
Id be neat to have a monk showoff temples etc, makes sense.
& Japan 2

I just recently went through Laos on a Hop On/Off Tour from Bangkok to Hanoi. My tour guide from Thailand to Luang Probang had also been a monk for about 8 years when he was younger as it provided him his only chance to get an education. He explained that in Laos you can be a monk for a day, a year or a lifetime. He is now married and has a child and happily doing tours that provide him a fairly good income. So many people come to SE Asia and do understand the importance of respect around buddha, the temples and the monks. 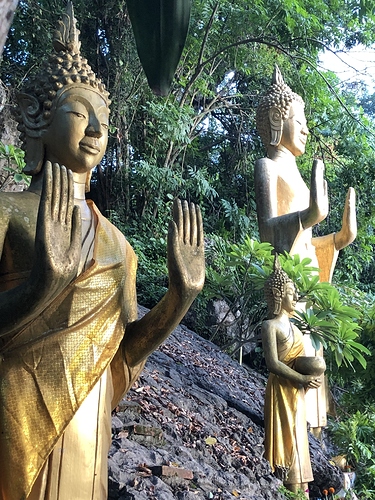 I visited Luang Prabang for a week in May 2019. While I was caught in the Laotian magic, I must also admit that I saw monks using smartphones and cameras. Tourists flaunted the rules about alms photography while local women ran a well-organized morning show.
Soon high-speed rail will connect this city of temples to China. I don’t see how the magic can survive.
(My photo) 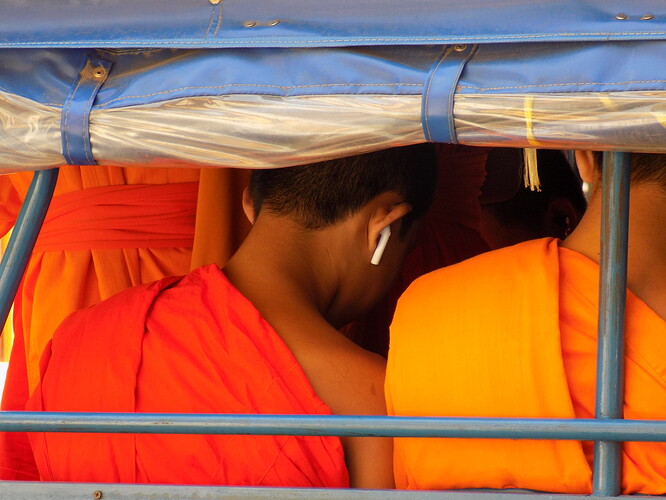 I lived in Laos for 4 years and in Thailand (on and off) for 2 years. Fantastic places, awesome people and most intriguing cultures. Once, I attended an initiation of a monk. Here’s my account if anyone’s interested.

After several months living in Thailand, I was invited to a ceremony for the initiation of a Buddhist monk. The novice monk was the son of a colleague of mine, and he was about to enter the order for a period of three months. This was (and still is) a common rite of passage for Thai males in their late teens or early twenties…

The ceremony started at some unholy hour way before sunrise, but my colleagues and I only managed to make it for 9:00am, which was ok, since people were still pouring into the village after 11:00am. When I arrived, I was led to the main wat (temple), where a number of people were already sitting around the altar. I was feeling extremely self-conscious, not knowing where to sit, how to sit, and what I should or shouldn’t do. Noticing my hesitation, an old lady waved me over and made me sit on the floor, next her and her friends. There, I started taking in the scene.

At the altar, six monks sat in semicircle, all facing the two figures in the middle: an old monk leading the chanting session and the novice monk, who, I noticed, was covered in tattoos - devotional tattoos, yes, but also more secular ones befitting of a Metallica fan.

Interesting as all this was, it was something else that attracted my attention: the congregation, which was quite chatty and oblivious to the whole ceremony. For example, the group of old ladies I was sitting next to were all sipping pop, chewing betel nut, and chuckling loudly. I cautiously began partaking of this seemingly disrespectful conduct, but I was soon reassured by the accepting looks I was getting.

The ceremony eventually moved on to a ritualistic Q&A reminiscent of “do you renounce . . . ?” of the Christian canon. Then, a straight razor was produced, and the head and eyebrows of the novice were shaved. Saffron and turmeric were smeared on the novice’s bald head, and this simple, yet highly symbolic gesture sealed his ordinance. Amidst the fragrant smell of the spices, I was informed that it was time to circumambulate the compound at the sound of music.

I was expecting . . . to be honest I don’t know what I was expecting, but what I know is that I wasn’t expecting a truck with gigantic speakers mounted on its roof, blasting techno music at ear-splitting volume. My old ladies (please note the budding sense of ownership), who had been dying of anticipation, dragged me down to this religious rave party of sorts and we all started our circumambulations. Bright orange parasols were waving at the relentless rhythm of the music. Tattooed monks were swaying gently left and right punctuating the cadence of the techno-beats. Old ladies were cheering with their mouths full of betel nuts and red spit. As we were dancing around the wat, an irresponsible amount of beer was delivered, and the party really got on fire. To my eternal shame, I must admit that the old ladies outdrank and outdanced me - but we surely had a blast.

There and then, I was too intoxicated to realise that what Thailand was teaching me was the million ways of syncretism.