Welcome to the Atlas Obscura Community discussion of Jam Roly-Poly. Ask questions or share tips, experiences, pictures, or general comments with the community. For the story behind this food, check out the Atlas Obscura entry: 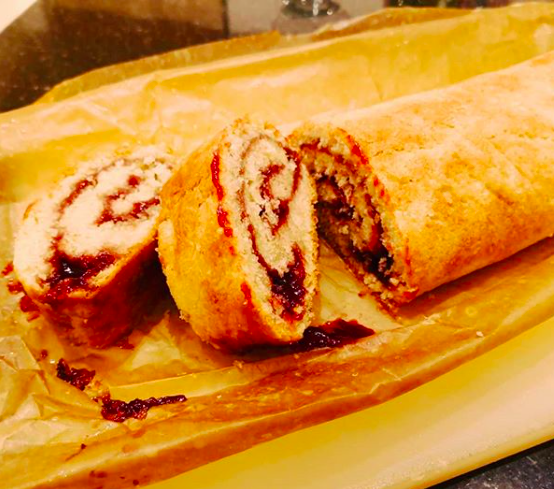 The jam roll was once known as "dead man's leg."

The description is right, but the picture is of a Swiss roll. Swiss roll is a light, sponge based cake made flat in the oven and then rolled up once it’s out of the oven. A jam roly poly is a heavier, suet based dessert of the steamed pudding variety. It has a much more substantial texture than a Swiss roll and came into being when people didn’t have ovens and boiled everything. Hence why it would be cooked in an old shirt sleeve. Usually though it was cooked in a specific ‘pudding cloth’ rolled and tied at both ends.

I beg to disagree; the picture is of a suet jam roly poly. This is a Swiss roll:
Swiss-roll-with-raspberry-jam|614x404

The picture is now indeed a jam roly poly, it wasn’t when I commented

No worries. I should have added a smily face or something, as you showed me they changed it

My first thought was that it was Swiss Roll not jam roly poly. I ate it often as a child. It was cheap and filling. We were none of us very well off during the war years. I think the picture still show something that nearer a sponge cake that a suet pudding texture. Suet pud never had a crumbly texture that the picture I see has.

I notice that many things change, like recipes for beef stew generally include red wine, even though having a wine to pour in a stew was unlikely for most people where I grew up in Britain in the 1960s. Similarly sausage rolls typically use a flaky pastry now, and are considered traditional, but shortcrust was what most people were able to achieve. So if jam roly poly is now almost exclusively a suety swiss roll, one should not be surprised.