Welcome to the Atlas Obscura Community discussion of Kaffeost. Ask questions or share tips, experiences, pictures, or general comments with the community. For the story behind this food, check out the Atlas Obscura entry: 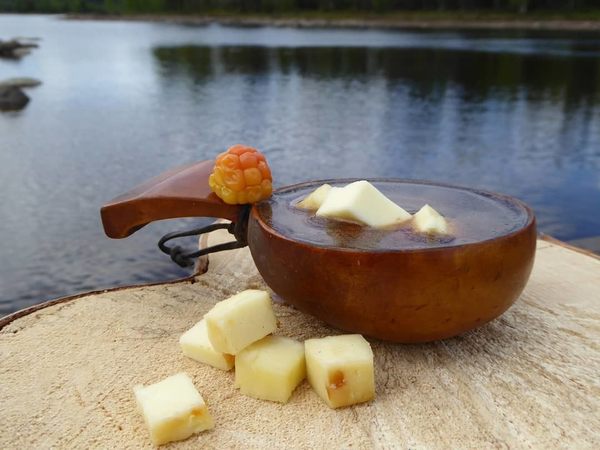 In northern Scandinavia, cups of coffee get enhanced with cheese.

Lovely, and just this, speaking as a person of Finnish descent. The term “Lapland” is out of favor. It refers to garments made of patches and rags, and is considered really old-school, similar to North Africans being called “pied noir” (DEFINITELY not cool!). These terms are similar in that they represent the marginalization of an indigenous group by white (whiter) Northern Europeans. The Three Crowns-- Sweden, Norway and Denmark-- for centuries marginalized the Finns as outsiders, savages, bumpkins, non-Nordic, maintained that the Sami culture in particular was Mongolian / Asiatic, and that the languages spoken in Finland were not Indo European in origin. I’ll keep this brief, but suffice to say that the Finns were not barbarians dressed in rags, although rustic compared with, say, Copenhagen. Anyway, look into this! Thanks.

Hey @victoria1, thank you for alerting us to this. We’re going to look into our usage of the term at this time. I very much appreciate you flagging this and helping us be more accurate and sensitive in our coverage.

Agree with everything you said! And this correction has no bearing on the racial and ethnocentric views of the past and present peoples/ culture, but Finnish is not an Indo-European language from a linguistic perspective, but Uralic and important in its own right!

Hi Victoria, to my understanding, Lapland is what the Finnish government calls it, so it is technically the official name. Is there a push to change it? The Saami people only inhabit a small portion of it currently. How much of it they historically inhabited is difficult to judge since they were traditionally nomadic. Numerous contradictory studies were conducted since the 19th century to determine how far south they were established. I’m sure all of these studies were scientific minded and entirely benevolent (heavy sarcasm). I couldn’t find any mention of what the Saami call that area.

The term “Pied Noir” is definitely derogatory, but the origins are up to debate. Some claim that’s what the French called indigenous North Africans before 1955. This version is only offered by non-French sources. As far as I know (I am French by birth and lived there until 1985), the term was used to describe people born of French parents in Algeria during the occupation (1833-1962). Interestingly, all the “pied noir” people I personally knew while living in France were actually proud of the term and used it routinely to describe themselves.

Both Finnish and Saami are considered part of the Uralic family of languages, they are not Indo-European. I can’t say whether Sweden, Norway and Denmark considered that a mark of an inferior people, but the linguistics are sound.

Hi, Frank. Thank you for your most interesting response.
https://minorityrights.org/country/finland/
I’m not presuming to be a scholar in these matters, but certainly will say that simply because a government uses a term does not assure that it is in tune with the psyche of the population. To introduce yet another wild card, most governments and official publications use the term “Gypsy.” People of that descent despise this term, and insist on Rom, Romany. These conventions are very slow to change. I do hear you, btw, on Pied Noir. A French-born friend lmk several years ago that it is considered a colonial, imperialist and racist term. The Three Crowns definitely regard the Finns, and not just the 8,000 Sami, as non-Nordics, though current science proves otherwise. Thnx again, interesting. VT

This makes me remember my Norwegian foreign exchange friend who introduced me to gjetost and knekkebrød, a delicious, quick breakfast. He also carved the brown sweet goat cheese and put a piece in his coffee to smooth and sweeten it. Also good.

My Scots-Irish grandmother used to put pieces of American red-rind hoop cheese into her coffee when milk was not available.