La Porte du Non-Retour (The Door of No Return)

Welcome to the Atlas Obscura Community discussion of La Porte du Non-Retour (The Door of No Return) in Benin. Ask questions or share travel tips, experiences, pictures, or general comments with the community. For the story behind this place, check out the Atlas Obscura entry: 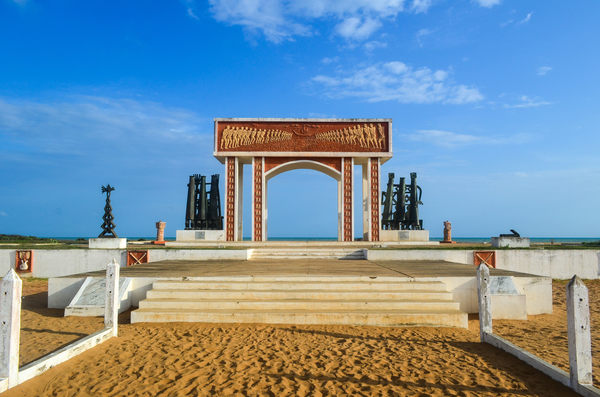 The Door of No Return

A monument to the more than one million enslaved Africans deported from the port of Ouidah.

When I visited, a local kindly explained the very sad/morbid slave route of 6 stages to me. I believe it would be respectful to add this story to the main page. I could not find it in English, can a native French-speaker please confirm whether my translation & summary below is correct?

The Door of No Return is located on the beach about three miles south of Ouidah.Â Ouidah is a city on the coast of the Republic of Benin, about 45 miles west of the capital Porto-Novo. Ouidah can be reached by shared taxi, or private driver.

The Slave Route runs from Ouidah to the Door of No Return, with various statues and monuments. along the route:

In addition to these 6 monuments, also a voodoo snake temple can be visited in Ouidah (The Temple of Pythons), as well as several musea, of which the old Dutch slave traders fortress is err… recommended.

Ouidah town has some hotels. At some hundred meters from the Port of No Return some beach resorts can be found.