This is my first time. Not to Las Vegas but on this conversation board. I’ve been to Vegas 3, 4, 5 times? It’s not my thing. My husband is an excellent gambler, craps is his game. I’d rather just sit on the toilet for that.

I am considering being a better wife than I am and joining him in Las Vegas. I could try to lose 10 lbs and get dumb before I head there and just hang on him in a tight dress. Or I could branch out and do what I like to do. That’s go look at things off the beaten path. So with your help, I can do that.

I see the…
-Pinball museum. Anybody been there? Need a car to get there or Uber (how much $)?
-The Neon sign graveyard? Looks like it’s outside. Outside in Nevada is a desert. Will it be my graveyard as well? Worth the chance? Far from town? Uber? Cost?
-Akhob…what is it…worth it?..bring water to sip or a flask?
-National Atomic Museum, oh wait, I already radiate!
-Lonnie Hammergren’s House…looks like a worse version of the House on the rock or as we fondly call it in my home “The house of Shlock” (WI) and the Wonderful City Museum in St Louis, MO, maybe a little bit of the Muskie Hall of Fame (Hayward WI) sprinkled in there too. Hmmm, anyone have something to say about it that will compel me to go? Change my mind?
-Burlesque hall of fame, how many pasties can one see and enjoy? Anybody? Advice on this spot?
-Flamingo habitat? Anyone? Smelly? Good? Great? Amazing?
-Atomic Liquors, where the mobsters and Barbara Streisand hang out is what I hear?
-Kiel Ranch? Spooky energy? Interesting, if yes, how so? If you had a problem at Kiel ranch, how would you solve it? Whoops, this isn’t an interview, sorry!

Do tell! I’m all eyes! Thanks.

Unfortunately, I think the Lonnie Hammargren House is only open to the public at select times each year, but I’ve heard that the Neon Boneyard is one of the most incredible places in the Atlas! 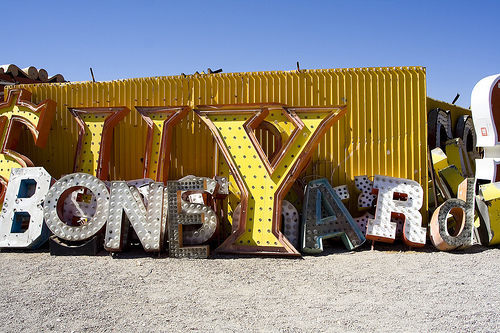 The neon signs from Las Vegas' past find their final resting place at this unusual graveyard.

You should go! Vegas is so much better off the strip. The Neon Boneyard is amazing. Frankie’s Tiki Room is also fantastic. If you’re looking for somewhere laid back to eat, Cornish Pasty Co. has the best pasties I’ve ever had outside of the U.K., and has plaques about the history of the food along with old photos of mine workers on the walls. (Also lots of pool tables if you’re into that.) 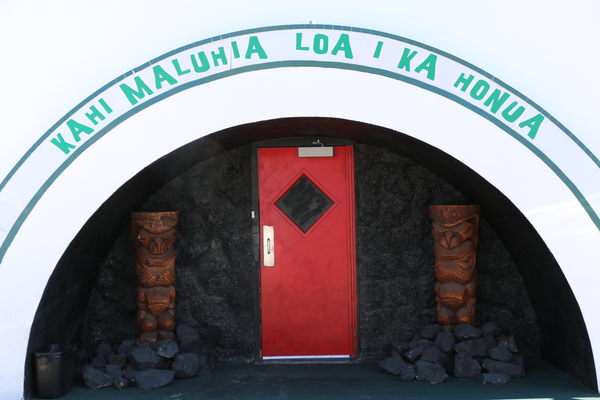 I also literally just added KISS Mini Golf to the Atlas this morning, so it’s not up yet, but it is SO weird and neon and fun. If you’re a Gene Simmons fan, a mini golf fan, or just a fan of weird blacklight kitsch, it’s a can’t-miss.

I, too, love Vegas off the Strip. (I’m also really into the very primal joys of feeding money into a machine, pulling a lever, watching lights flash at me, and hopefully receiving money for no effort.)

The Flamingo Habitat is cool in that there is a flamingo habitat in the middle of a hotel. But it’s just that. Definitely worth a quick stop, but don’t expect to spend more than 10 minutes there.

Beyond your list, if you like hiking or the outdoors, Atlas Obscura worked with Travel Nevada (the state’s tourism agency) to write about nearby state parks. I used it the last time I went to Vegas (to see JLo) and it didn’t disappoint.

I have ended up in Vegas probably a half dozen times now with a few days to kill. So have managed to make it many of these spots. Pinball Museum is very fun, assuming you enjoy playing pinball! You would need a car, but it would be a cheap Uber ride from the strip or nearby, it’s close.

Neon Graveyard is also close, just be sure to make an appointment, the tours fill up. Also it is outside, and can beHOT, so going either in early morning or late afternoon is preferrable.

Akhob is AMAZING. You don’t need to be a modern art person to love the surreality of going into a fancy handbag store, getting into an elevator and descending into a kind of art version of A Space Odyssey. You basically just stand there and watch the colors change for 15 minutes, but it is a transformative experience. I can’t recommend it highly enough, but make an appointment as soon as you are able. It books out months in advance. If you can’t get an appointment you can always call to check in the few days beforehand or even day of to see in anyone has canceled.

Lonnie’s house is probably not open right now. You can try calling him (his numbers on Yelp) but he is older and was in the process of selling off things, so I wouldn’t bet on it. Also if you do visit, expect to spend a few hours with him there, and be prepared for a lot of junk mixed in with the wonder. If you don’t like the House on the Rock (which might be my favorite place in the US, ha!) you will not like Lonnie’s place AT ALL.

Burlesque hall of fame is tiny, so only worth the stop if you are in the area, but the area is cool. Atomic Liquors is pretty much just a bar, Frankie’s is more fun.

I also really like the National Atomic Testing Museum (insomuch as you can like Atomic Testing) and it’s a short Uber ride as well. https://www.atlasobscura.com/places/national-atomic-testing-museum-2

If you do have a rental car, driving out to Seven Magic Mountains is well worth it! https://www.atlasobscura.com/places/seven-magic-mountains

In fact, I would really recommend a rental car if you drive. (I hate driving and am scared of it, but still did it in Vegas and it was worth it!) It means you can leave the city center and get out to things like Red Rock Canyons, or even take a day trip to Death Valley. The nature that surrounds Las Vegas puts everything on the Strip to shame!

Have so much fun!!

Flamingo Habitat – The flamingos are cool to see, but I had to sift through a lot of drunk tourists just to see them.

Atomic Liquors – I haven’t been but my family in the area recommended it to me. Really, the whole downtown LV area is worth a look. Here are some of my favorite spots there:

The Writer’s Block – local indie bookstore
11th St Records – record shop
.eat – great brunch/lunch place
Bunkhouse Salon – laid back bar with plenty of indoor/outdoor space
Cornish Pasties – seconded! It was sooooo good
If you’re there at the beginning of the month, their First Friday art walk is a lot of fun too!

Bellagio’s Fine Art Gallery has a Kusama infinity room through April 2019, so if you’re going before then, definitely stop by! Bellagio also has some amazing indoor gardens that they rotate themes for every season.

Seconding 7 Magic Mountains! The drive down is not that far from the city, but you still get a feel for the otherworldly beauty of the Mojave.

Springs Preserve – beautiful botanical gardens (including a cactus garden!) plus the Nevada State Museum and another museum whose name escapes me.

Lindo Michoacan – delicious Mexican place on the west side

Don’t forget the Atomic Testing Museum on Flamingo just east of the strip. They show not just the geeky technical aspects of the Mercury Test Site but a lot of pop culture stuff too. You know you want a Miss Atomic Bomb 1957 refrigerator magnet from the gift shop.

Monte Carlo no longer exists, as MGM Resorts has remodeled the property and renamed it Park MGM. As park of the changeover, part of the property has been turned into the NoMad Las Vegas (NoMad is essentially the former Hotel 32 part of the property, but has it’s own entrance as some of its’ own bars and restaurants.). The entire restaurant and bar line up from Monte Carlo is gone and replaced with more upscale options, and some of those spaces are part of the Las Vegas location of the Eataly food hall chain.

Im glad,never really liked Monte Carlo since it Then never had enough going for it.
Other hotels should be active.
Best bet is Wynn.
Thanks

Fourthing or fifthing the Neon Bone Yard recommendation. An amazing place, but as Dylan mentions, one that needs to be booked in advance and not to be experienced during the midday sun.

If you find yourself Downtown, I’d suggest checking out the Main Street casino, which features some of the very last coin operated slot machines in Las Vegas, a Pullman Car, bronze doors from the Kuwait Royal Bank, chandeliers from San Francisco and Paris opera houses, and perhaps most interestingly, a section of the Berlin Wall behind the urinal of the men’s room. (You can pick up a map at the front desk.)

The Pinball museum was a blast, definitely go!

I’ve been to Las Vegas about 12 times. I gamble, but grow tired of it more quickly than most, I gsather. I truly appreciate the diversity of dining choices and that in itself is a draw (particular faves are The Peppermill and texas De Brazil). Spa days are nice, too, i particularly like the spa at Hard Rock. I used to be an “anti-Vegas” snob (decades ago), but the place has won me over by being all things to all people. Relax, don’t take yourself too seriously and you WILL have fun. Here are some of my favorite non-gambling activities (ranked):

These are great recommendations.

And plus one on The Peppermill for a nostalgic, one-of-a-kind meal.

Also, what seems to be the consensus best-Thai restaurant in the US is located in a Las Vegas strip mall:

This sounds rude - but FAT ELVIS… That is how he bills himself, and he is FUN. We saw him at some rundown rickety hotel, but now I think he plays somewhere else. Look him up and check it out - free show put on with a lot of passion.

Pinball museum is great. Have been there this past fall and years ago. You pay for what you play…from 10-50 cents, some could be more…Played more of the quarter games. They will be moving to the south end of the strip, sometime this year, into larger facility.

Ethel Ms cactus garden is pretty interesting. Who knew there were so many different types of cactus. I also enjoyed a walk thru Star Nurseries to look at the different plants that survive and thrive in our desert climate.
Most of the strip resorts and also many of the off strip resorts have great spas. If you get a massage or other treatment you can use their facilities for the rest of the day, and most have a more private pool and spa area. Some have great food too. My favorites are the Four Seasons and Green Valley Ranch.
You can rent a car and drive thru Red Rock and/or Valley of Fire state parks. Both have amazing rock formations and if isn’t too hot you can take a hike.
If it is too hot you can spend a day at one of our two water parks, Cowabunga Bay or Wet and Wild. Both are fun.
Mandarin Oriental has a great afternoon tea.
You don’t have to gamble to have a blast here. You can pamper yourself with luxury or go on the cheap and see all the free attractions, most of the casino resorts have at least one, from a mermaid tank to talking roman statues. I love to watch the human statues at the Venetian scare little kids when they make a sudden move.
There are great shopping experiences that range from the most expensive stores in the malls on the strip to the outlet malls to the Chinatown gadget shops.