Welcome to the Atlas Obscura Community discussion of Last Woolworth’s Lunch Counter in Bakersfield, California. Ask questions or share travel tips, experiences, pictures, or general comments with the community. For the story behind this place, check out the Atlas Obscura entry: 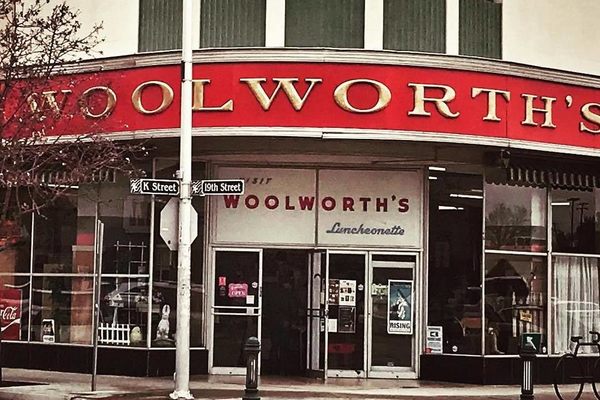 What about Woolworth Walk in Asheville, NC? The store itself is now an art walk featuring the works of local artists for sale. But the lunch/soda counter is still operational and looks like you stepped back in time. https://www.woolworthwalk.com/

what’s with the picture of the doors? it’snot even a full-length shot? seems rather amateurish, like taken by someone’s grandmother who doesn’t know how to handle a camera. very unprofessional.

The photo is not focused on the doors - it’s showing the
‘Woolworths’ logo embedded in the sidewalk. Every Woolworth’s
I’ve visited has the same entrance. Very iconic.

My location has been tooled to be an Retro Amusements Museum, and has been prevented from opening for 20 years due to City special interests…

But when it does open, I expect the Woolworths Lunch Counter to be OPEN for business.

I worked at Woolworth in Denver, Colorado in the early 1970s as a stock clerk, and again in the early 80s as a merchandiser in what was then the second largest Woolworth in the world - )it had lost its status as the largest in the late 60s I believe) downtown on what is now the 16th street mall. The store was comprised of 4 stories, including 2 floors of stockrooms on the top, the street level store with entrances on 16th and 15th, and a full retail basement level. To move merchandise, besides a freight elevator, there was a steel slide that snaked from the top floor to the basement, and it was always fun when something got stuck in that slide chute, go climb in and ride down to dislodge the stuff that got stuck, which happened frequently. As a merchandise, my favorite story was the year we did not receive and baby Jesus figures for the build-your-own Nativity sets. He was totally absent from the store in about 1982. The store was so large it had its own employee cafeteria complete with it’s own lunch ladies and hot meals daily. There was a large traditional lunch counter on the first floor for customers, and an a la carte buffet in the basement, as well as 2 or three takeaway counters for burritos and corn dogs near the main 16th street entrance, along with an enormous candy counter.

When the 16th street mall was built, they had to break through the walls of the basement in order to lay infrastructure, and the cafeteira was closed for about a year, but not before the basement became infested with critters for whom the break created access - it seems they were after the food supply in the pet department located in the middle of the basement sales area. At night, managers would move counters, set traps and try to extract by hand any they could catch. During the day, it was common to see mice cross the main aisle in front of shocked little old lady shoppers.

In the early 70s, we were paid cash, weekly, in an envelope. It was a pretty formal atmosphere…all the managers were referred to as Mr. or Miss - no first names were used for them by the rank and file. Lots of fun - so sad they closed. Many more stories, too!