Welcome to the Atlas Obscura Community discussion of London’s Rose-Ringed Parakeets in London, England. Ask questions or share travel tips, experiences, pictures, or general comments with the community. For the story behind this place, check out the Atlas Obscura entry: 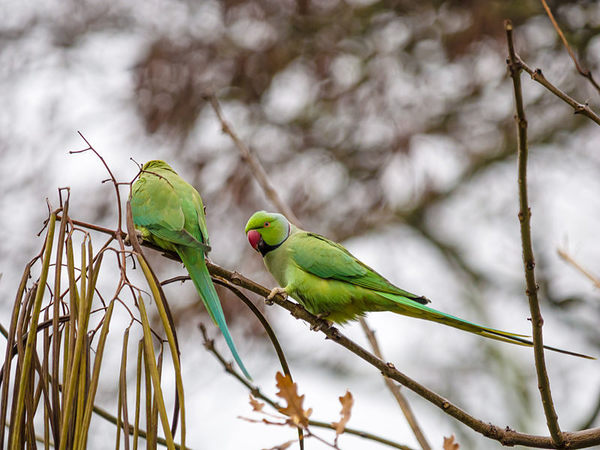 Legend says these colorful, invasive residents are the descendants of birds released by Jimi Hendrix.

These critters are year round residents around our apartment building in Wiesbaden, Germany. They add a splash of color, though their calls can get a little loud.

It’s fun to read the legends of where they supposedly came from. Reality, sadly, is not as exciting; they have pushed up from Africa as Europe warms.

Totally agree , they are really lovely but noisy birds and great fun to watch as they are amazingly intelligent.

The invasive population in London/ the UK are definitely derived from escapees from captivity , although no one knows where exactly they escaped from and there is only rough estimates for the time period (Late 50’s , 60’s , 70’s and possibly strengthened by more escapees in the 80’s ).

Are you sure that the ones in Weisbaden are the result of a natural migration ? I’m not doubting what you are saying as climate change is causing changes to migration patterns and species compositions but I haven’t read anything about natural parakeet migration from Africa to Europe.

The picture shows two red spectacled Amazon parrots that are part of a now immense population of feral parrots in Southern California. There is speculation that many of these were from birds released as a result of (or to protect them from) a fire at a nursery in Pasadena CA. There are multiple species of the birds, and some observation that there may be unique species as a result of cross breeding. In some places in Pasadena, these birds flock in clouds of hundreds around dusk. The picture was taken near Washington Boulevard close to Venice Beach in 2015 (note the crow sitting menacingly above what is most likely their nest) 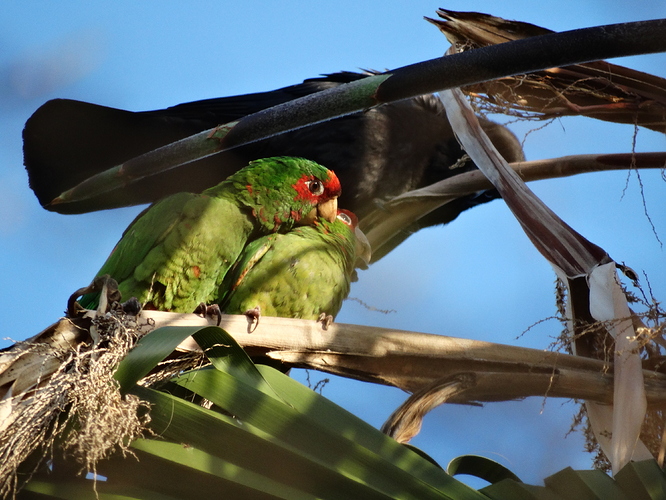 I’m pretty sure that I saw a pair of these flying across ibapuera park in Sao Paulo city , beautiful birds. They also remind me a bit of a bigger version of the “maritaca” ( Psittacara leucophthalmus ) which is a parrot which you see (and hear…) literally everywhere in South-East Brazil , except the maritacas dont have such red plumage above their beaks.

I think with a lot of these invasive parrot species its a sort of “ head vs heart ” thing , in the sense that logically we know that they are ultimately an invasive non-native species that will inevitably have a negative impact ecologically on native species. But we still can’t help but root for them and admire them because of their cheeky characters , intelligence, and colourful plumage in a way that we dont empathise with other invasive birds like for example a sparrow , pigeon or a starling.

Its kind of ridiculous but I know that hypothetically if I was involved in a project that entailed the culling or eradication of these parrots, due to some negative ecological impact on another bird species, I would really struggle to pull the trigger if I had one in the cross hair of a rifle sight. Of course , I would pull the trigger eventually , sure, no question, but I would do it grudgingly and I can imagine that I would feel terrible about doing it. Strangely this hesitation and guilt wouldn’t be an emotion that would even enter my mind with most other invasive species.

I would feel terrible about doing it.

I might or might not feel terrible. We sleep with the windows open (a European necessity in the summer), and one of these guys was rather loud at about 5 AM today…

(the bird in question is safe, though, as I don’t have anything to shoot with other than perhaps a rubber band)

They’re all over Israel too, where they love eating ripening dates at the top of ornamental date palms commonly found in Israel’s towns and cities.