Welcome to the Atlas Obscura Community discussion of Lost Cove Settlement in Erwin, Tennessee. Ask questions or share travel tips, experiences, pictures, or general comments with the community. For the story behind this place, check out the Atlas Obscura entry: 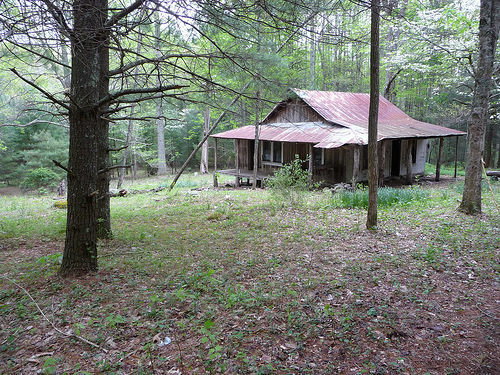 I have written a science fiction series, THE LOST COVE SERIES, with four novels set in the Lost Cove, Bumpas Cove and the mountains around Erwin, Tennessee. The books are available on Amazon (Tom Deaderick).

The most recent, FLIGHTSPAWN, features many familiar locations. A complete GPS list is provided on my web site, https://TomDeaderick.com.

I love finding an interesting place and writing a fictional event into it. It’s like a geocached gift that you leave behind for others. I hope you like the books, please check them out and leave me a review on Amazon.

Thanks for sharing, Tom! We’ve actually discussed positioning some of our incredible places as inspiration for our community to write fiction around. Stay tuned!

That sounds terrific Eric! Let me know how I can help.

Richard Rourke wrote an article on the series for the July 31, 2019 Erwin Record. Here’s a URL to the article summarizing the series…Deaderick releases latest book in "Lost Cove" series - The Erwin Record - Unicoi County, Tennessee

It’s time to get writing again! Atlas Obscura is full of places and foods that can send the imagination reeling. Let’s lean into that creative spirit and use some of the world’s most amazing places from the Atlas Obscura database as prompts for your original fiction! We’ll occasionally be presenting amazing places and images from the Atlas to inspire your short fiction, poems, and other creative responses (please note that any responses will be subject to the same rules and conduct guidelines a…

I just found in some research that my 4th great grandfathers son Stephen Bailey was the 1st reported settler of Lost Cove and I would love to go visit and photograph this area .
Side note : family legend is that he bought the cove from the Indians with a $10 bill and a rifle when his regiment went thru the cove.
The last person to leave the cove was Velmer Bailey. In December 1957 …They lived in Lost Cove, North Carolina where Velmer was a deacon at the Mountain View Free Will Baptist Church (Lost Cove Church). He also preached at this church. He logged for many people. He was a carpenter by trade and a farmer on the side. His apple orchard was known through out Lost Cove. He also worked in the mines of Virginia. School teachers often boarded at his house in Lost Cove, NC When the railroad closed its track, they moved to the Lamar community, Washington County, Tennessee on December 26, 1957. They were the last family to leave Lost Cove, where he left the inscription School closed forever at Lost Cove, December 17, 1957. Sinclair Conley, 75 years old. Last revival conducted by Clyde Fender, November 1956. Last Sunday school, November 26, 1957. Very sad. on the wall behind the pulpit of the church/school. They had seven children, Okie (1932-2005), William (1934-1934), Earl (1935-1935), Eugene (1938-1997), Isaiah (1940-), Hosea (1944-), and Priscilla (1945-). Servilla died on August 25, 1995 in Jonesborough, Tennessee. Velmer died March 24, 1997, just five days after his ninety-fifth birthday. They are buried in the Maple Lawn Cemetery, Jonesborough, Tennessee.