Hi all! I’m a college professor who has just arrived on the ground in Spain with a group of undergraduate students who are on a short-term study-abroad trip themed “the business of food.” Tomorrow we have a free day and a large number of students have expressed interest in going to Madrid (Toledo is our “home base”)… any thoughts or suggestions for things to see? Sobrino de Botin looks like a must-see… any others?

Casa Mingo is another good one if you like Cider. I remember coming here as a student myself. It’s a traditional Asturian cider house that’s been there since 1888. Try one of their brews and roast chicken

Once upon a time, Madrid was filled with adorable little horchata stands. Now, there is perhaps only one left: the Kiosko de Horchata Miguel y Jose, which is a very eye-catchingly blue and white. A food note: Spanish horchata is different from Mexican horchata. The former is made from tiger nuts, the latter from rice. A history note: the English word for horchata is orgeat, which was the name of whole family of first barley, then almond-flavored syrups and drinks. But in the case of both horchatas, they seem to have gone with a different grain and nut entirely!

If its a food business in Madrid that you’re interested in and you only have a day, then you can’t go past the Mercado de San Miguel: you can get cheaper food in Madrid but the setting, central location and bustle makes it a must-see. As for the food options: 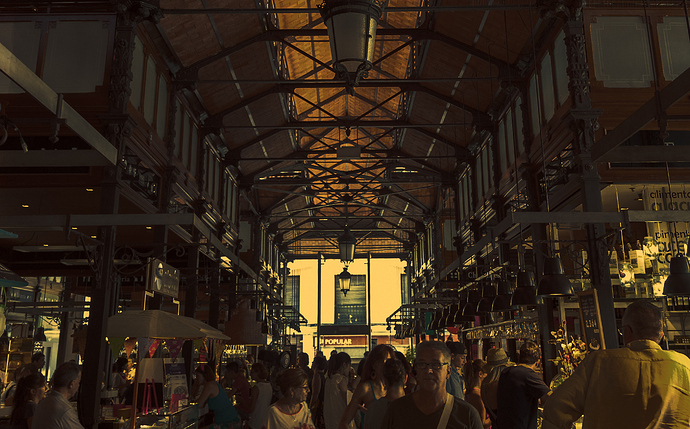 Too late – you’re long gone… but if you come back, Mercado San Fernando, one of Madrid’s great public markets. Each market has a super-barrio feel, so everyone is an education. This one in Lavapies is/was run by assembly of the vendors, and is something of a model. (I’m told Minneapolis’ public market was designed along its lines.) It is totally packed weekends with young people from the community.