Welcome to the discussion thread for the story, ‘Mail Art’ Makes a Comeback During Quarantine. You can share your comments and thoughts about the story in the conversation below.

For 14 years, POPO, the August POetry POstcard Fest has allowed people to send original poems on postcards to other participants. 424 poets participated in 2019 and the fest was moved UP this year due to the shelter-in-place guidelines. See: www.POPO.cards Registration ends July 18. Come join an international community of poets and artists.

From store-bought postcards back in 2015 to unique photos last travel season, snail-mailing a token of appreciation to people who helped me in my last journey has been an important part of my process since I started traveling long-term. So, I guess I’ve been practicing some form of mail art without even knowing it!

In 2018, a creative challenge I did with a friend of mine culminated with my mailing him a collage. He filmed himself opening it, and I edited it with clips from my process putting the collage together: https://vimeo.com/333201577

During the Vietnam War, my boyfriend sent his mail with little drawings on the envelope 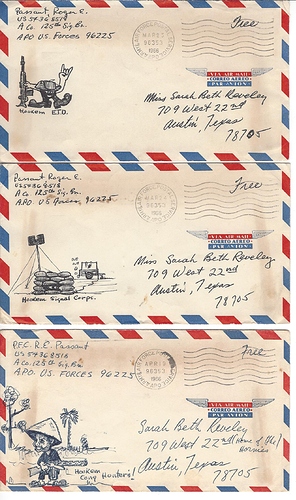 Before the turn of the century, I was on a craft forum with a lot of mostly women who were mostly young enough to be my children. Many mail exchanges of various sorts happened globally. While it might be something enclosed in a mailer, sometimes the mailer or letter or card was the exchange. ATC or artist trading cards, decorated mailing tubes, cereal boxes, origami like constructions, mailed fabric: name it, we probably did it. The forums changed and new ones came in, sometimes with more focused conversations. While I wasn’t involved, we witnessed the birth of Etsy, the rebirth of embroidery, the trend of re-imagining your nana’s 1970’s era Jello or crochet creations. My favorite mail art from then was a folded square which the recipient would receive, open the folds and cuts to show the completed image, while the reassembled mailed piece was rather like an ATC on its own.