"Most wanted" or bounty board?

I know that the site has made a lot of progress in allowing stubs and making it easier to post places, but I was wondering if there was a place to just… throw ideas for places to submit? Yes it seems like I’m just asking for a way to give other people more work, but there are some places I will never get to visit and would best be handled by a local. And I’ve seen some people even say about their city “oh there’s nothing around here for me to add” and I’m like “oh ho but you’re wrong!” It would be great to just have a central repository for people to look for ideas.

Bliss Hill, the famous Windows XP background
Gregory Ain’s MoMA house, recently found after being “lost” for 70 years
Wink, the Jackson Heights Penguin, a statue that is often dressed for the current occasion

@lampbane thanks for this note. I wish I had a better answer for this, because it really is a good idea, but right now the best option is simply posting in this forum. In an ideal world, we’d have a robust bounty list, and as you suggest, a way to recognize the contributors who have taken an idea and turned it into a full entry.

I should note that with the app, we’ll also have an in-between solution. We’re adding the ability to submit a “Community Find”, which is just a name of the place or attraction, the location, one sentence on why it’s special, and a photograph. (Once reviewed and accepted, we’ll encourage the entire community to add to it.) It occurs to me that this would serve the purpose you suggest—it would just take a minute or two to add each one—BUT, we also do require a photograph that you took, so that would limit your ability to add places you hadn’t actually visited.

Again, though, I agree this a great idea and the right direction, and we just need to figure out how to get there.

BTW, happily, we do have one of those examples: 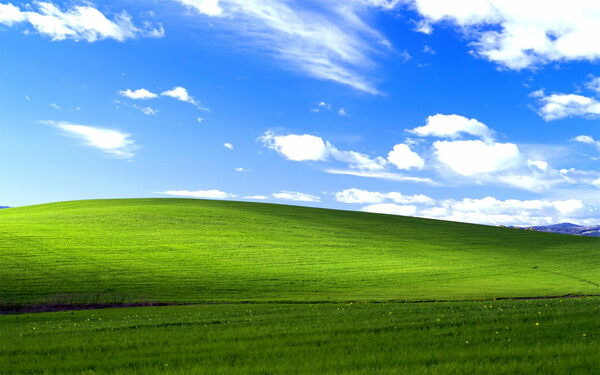 The unedited photograph called "Bliss" has graced the screens of over a billion computers.

Hrm, don’t know why that didn’t come up the first time I looked for it.

I’ll swap that out for Villa Charlotte Brontë

Yes, that’s a great one to add—I’d like to see more on the Villa Charlotte Bronte as well.

(And sometimes our site search doesn’t work as well as it should!)

Thanks again for the suggestions, and have a great holiday weekend.

Ha ha I might start using this thread as a scratch pad.

The Dominguez Tree, a palm that was planted in 1898 on the family-owned land that is now Disneyland, now sits outside the Jungle Cruise’s treehouse
OK Computer highway interchange, the location shown on the cover of the seminal Radiohead album

It really is a shame I no longer have my pictures from Wellington, New Zealand as it’s one of the cities for which there are most wonders that I’d be willing to add:

One is Carlucci Land, a peculiar minigolf/sculpture garden hybrid on the way to Owhiro Bay.

There’s the paua shell murals of Scorch-o-Rama in Scorching Bay, too. Although I was able to find a few CC pictures of it, they weren’t the best quality so I feel they were the cause why my entry for the restaurant was rejected.

It’s a shame that the cool, abandoned Erskine College on the way to Island Bay is now being turned residential, but it would be interesting to see what, if any of the original construction is incorporated into the new space.

With NZ’s winter coming to an end and the country generally being closer to full reopening than others, I’d love to see if any Kiwis and Wellington residents have something to add about these places to the AO database.

Then there’s the Mason Lane Steps with the video art screen, and Brown & Co. seeing as AO has a soft spot for shops with taxidermy. Although it’s been a while so quite a few of these may have changed, and they’re in full winter now… so not holding on to much hope for new additions.

Wow, lampbane! Thanks so much for the information about the Dominguez Tree! I must have seen it a hundred times, and never had any idea. Why on earth doesn’t Disneyland have a plaque there or some kind of sign telling about it?

Iwayazuido (“Rocky Valley Tunnel”) in Kakegawa, Japan.
Toilet in Nature, a women’s bathroom in the middle of a garden
Mysterious floor tiles in Tokyo Station that mark the sites of political assassinations

The New York Times just wrote about “The Patriarch,” an olive tree that is almost two thousand years old and was recently damaged by wildfires.

I agree with you…

In Six Flags Mexico City, the queue for Medusa Steel Coaster is almost as disorienting as the roller coaster itself. That’s because it used to be a “mystery spot”-style attraction in its own right, known as La Cabaña del Tío Chueco (Uncle Crooked’s Cabin). The Cabaña had been one of the first attractions of Reino Aventura, the precursor to Six Flags.

Disneyland already came up in this thread, so I’ll use it as a very loose example of what happened with this queue. Imagine they decided to close and half-strip down Tom Sawyer’s Island, then made the remains a part of the queue for Big Thunder Mountain Railroad.

I find the Tío Chueco show buildings very AO-worthy because parks like Disney are far more likely to completely bulldoze over their history (leaving token mementos, of course) than try to incorporate so much of it to new features. Specially since the angled floors that made the Cabin attractive make no sense as part of a queue, where you might have to stand on one place for long periods. If I had the pictures for it, I would’ve definitely already written an entry.

There’s also a whole collection of modernist churches in the city that I’d love to write about. From the fan-shaped Parroquia de la Divina Providencia, to the “Church of the Ball”, the giant Christ of the Iglesia del Purísimo Corazón, and even the winged Parroquia de la Esperanza not far from Six Flags.

Finally, there’s the “world’s largest Baby Jesus” in Zóquite, Zacatecas, which became internet-infamous for its resemblance to Phil Collins.

Today the NYT wrote about Meadowood, a farm in Simsbury, Connecticut where a young MLK Jr. spent two summers and escaped from segregation, which would reportedly inspire his work.

I actually live in Jackson Heights and I often take pics of the penguin. It never occurred to me that AO visitors would want to see it here or if the editors thinks its “obscure and wondrous” enough, but if there is a demand, I may just write an entry on it.

I’d just do it, anything that could be cool for people from outside of the town is worth it i think.

The penguin is absolutely interesting enough to be in AO, especially with the little backstory around it.

In the Coyoacán Borough of Mexico City, the house on Viena 197 is a bit of a local sight due to its unique decorations. Most of the year they are a combination of Christian symbols and patriotism, with Mexican flags and tricolors along with figures of mariachis and the Virgin of Guadalupe, but it gets switched up a bit around Independence Day in September and also for Christmas. 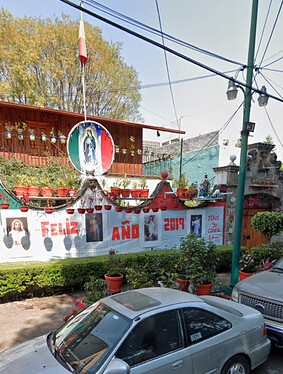 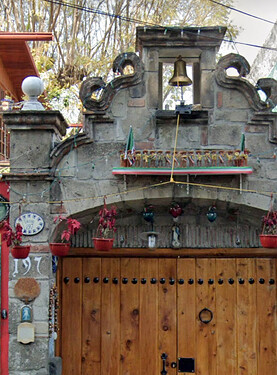 Something I definitely tend to do is look at some of the maps and notice sections that seem bare, then actively try and find something that can go there. The Far Souths of both Mexico and Mexico City are some cases of this.

For the City I found a small football field inside what looks like a volcanic crater and I think it would be such a good entry. As usual, the main problem is pictures, but I also haven’t been able to confirm if it is indeed a volcanic crater. Google Maps labels it as such, and it would make sense for the area, but… who knows. 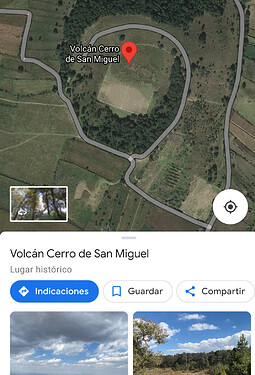 Then, in the country’s southernmost state of Chiapas, I’d like to write about the central park obelisk of a certain town. It is notable as it has Japanese writing on it, since Acacoyagua was one of the country’s, and in fact Latin America’s, first Japanese coffee plantations. Brazil and Peru have larger populations of Japanese descent, both by numbers and percentage, but I still think it’s a very important symbol of the diaspora’s influence in the country.

I sometimes have success by going to a local reddit and asking people to take pics.