Welcome to the Atlas Obscura Community discussion of Mummies of Museo de las Animas in Encarnación de Díaz, Mexico. Ask questions or share travel tips, experiences, pictures, or general comments with the community. For the story behind this place, check out the Atlas Obscura entry: 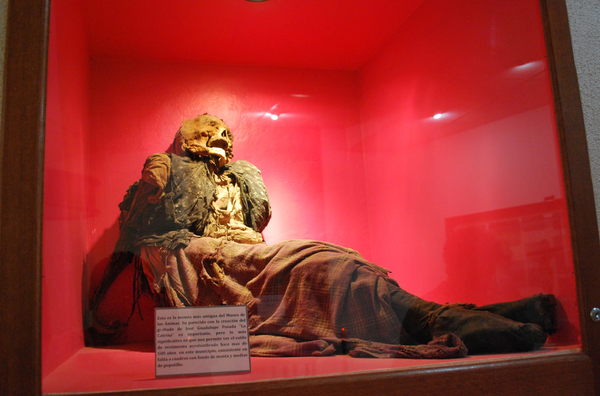 An impressive if morbid collection of mummified remains from different eras of the region's history.

I am thinking that these are the Mexican mummies used at the beginning of Werner Herzog’s “Nosferatu.” Glad they put them in a museum since his filming.

I had almost forgotten the mummies in “Nosferatu” , I should definitely watch that film again.

I just checked the filming location for the mummy scenes in the Herzog movie and it was filmed in Guanajuato’s Mummy museum. So similar mummies to those in Museo de las Animas , in the sense they are accidentally mummified but different location.

To the author of this entry: I find your description of the Cristero movement highly biased. The Cristeros were responding to the Mexican government’s violence against Catholic priests and Mexican Catholics in general. They were heroes, not ignorant peasants. Please educate yourself.

I’m the author of this entry.

To clarify , what description of mine are you referring to ? Because I dont think I’ve said anything about the Cristeros that is historically incorrect. I have tried to portray both factions as fanatical warring agents that perpetuated violence and misery, which they were.
There are no “black and white” , “Good vs Evil” , “Heroes vs villains” platitudes or lessons that can be drawn from the Cristero war as BOTH sides committed atrocities and tried to force their ideology, whether it was secular or religious, at gunpoint on the general population.

Was it this sentence that angered you : “frenzied and fanatical rhetoric of clandestine priests convinced many that the apocalypse was nigh and that the president of Mexico was the devil” ?

Well , with all due respect , there WAS an enormous amount of fanatical propaganda that was spread by the Cristero movement that perpetuated the conflict and fed into ignorance. Yes , it began with peaceful non violent resistance to the oppressive laws enacted by the government through acts of civil disobediance. However, as it escalated it became a violent war of attrition in which the Cristero guerillas were killing many people who were non combatants.

A notable case was the massacres of about 300 public school teachers , the “maestros desorejados” who were tortured , murdered and their corpses mutilated. This phenomena wasn’t an isolated event and was occurring right up until the 1940’s , doesn’t this remind you of the acts of Islamic fundamentalists such as Boko Haram , Isis and the Taliban , who also hate and fear secular education ? because to me there are some striking parallels between the Cristeros and these later Islamic groups.

With all due respect , you seem to be rather biased on this subject yourself and it is a matter of historical perspective whether the Cristeros were “heroes” or religious fanatics. Although you may yourself consider them to be heroic figures please acknowledge that the old adage “Ones man’s freedom fighter is another man’s terrorist” applies in cases like this and that the subjective opinion you have might not be shared by everyone.

For my part, as someone who was raised in the catholic faith, lived and has family in Mexico, I dont take any particular stance or bias on the issue other than a general feeling of disgust towards the atrocities of BOTH sides and the whole war itself.

Ok mariuwes , lets go over this once more. Here I referred to the fact that the millitary occupation and oppression of catholics by the government in Central Western Mexico led to anger and young men joining the guerillas of the Cristero rebellion. That is to say , I am suggesting that the actions of the government in crushing the right to freedom of religious expression brought about the conflict and caused it to escalate.

Here I am referring to the violence committed by both sides and the fact that the governments attempt to displace traditions and the catholic belief system of the population led to a popular (in some parts) movement. I am suggesting that this policy created the conditions which the insurgency would arise from.

“The war proved to be a particularly bloody and protracted conflict in the Jalisco region, where strong Catholic beliefs and traditions were held by the majority of the Jaliscience population, who refused to submit to the centralized authority of the government”

Finally , here I refer to statistics of the death toll caused by the war and one of the mummies kept in the museum which belonged to a man who was shot by a government firing squad. It may not be clear from what I wrote but I am hinting that his execution was a war crime.

“It’s estimated that between 30,000 and 50,000 people lost their lives during this four-year war, and some scholars believe the death toll was in fact much higher. One of the mummified bodies in the museum, displayed with his rifle, is reputed to be the remains of a powerful local guerrilla commander who was captured and shot by an army firing squad at the height of the Cristero rebellion”

So once again , please remind me in which part of my reply or the article was I biased and in what part did I focus solely on the atrocities committed by the Cristeros ??

Here I am referring to the violence committed by both sides…"

Where do you do this in this paragraph? I don’t see anything of the kind here. And while describing at length the killing of 300 teachers, you don’t say a word about the arbitrary executions of priests, the mass hangings, the torture and mutilation of the captives by the government forces. Please, my friend, enough of this hypocrisy.

You mean what I wrote here on the forum about the killing of teachers ? the comment that was in reply to your original assertion about the Cristeros being “heroes” which isn’t actually in the main text of the entry , and which was the subject of your original complaint ? where is the “hypocrisy” there?

The entry is neutral meaning that it doesn’t take any one side or bias in the Cristero war or portray any side as being “heroic” or morally/ethically superior and I’d rather it stay that way. But if you wish to add anything constructive to what I wrote then go ahead and click the edit button, the entry is open to editing from anyone afterall.

But please be aware that if you chose to do so then you yourself should display some neutrality in what you write. That is to say , if you display any partisan hypocrisy or bias towards portraying the Cristero movement as morally superior or
gloss over their own atrocities then I’ll just delete it.

I thought I said this very clearly: what I mean is that you don’t describe any government atrocities, only the ones committed by the Cristeros. You also forgot to mention that the killings of the teachers took place in 1935-39, long after the end of the Cristero war about which I wrote in my comment. Anyway, there is no point to drag this on any longer. I suggest you read Graham Greene’s ‘The Power and the Glory’ to understand the whole issue. After all, this is the history of your country.

I assumed from the very begining it was clear and self evident that I was condemming the atrocities committed by both the Mexican government and the Cristeros , not absolving either of them. But clearly the Mexican government do not have a monopoly on the use of violence and persecution to further their political and social aims.

There is a long history in Mexico of the Catholic church persecuting and terrorizing communities with the inquisition and ecclesiastical fanaticism. Then of course they participated heavily in the genocide committed towards the Pre-Colombian civilizations, the Trans-Atlantic slave trade of African peoples, the anti-semitic oppression of the converso Jewish community to name but a few. So lets not kid ourselves into denial that they haven’t also played their role as persecutors throughout history. Not to mention the constant interference of the church in political matters and wielding an inordinate and unhealthy amount of power in politics as a whole , which by the way still occurs to this day.

Yes, of course , none of these things can ever justify the state repression of the Catholic church during the Cristero war , I am NOT claiming that. But having a knowledge of this background does give a historical context to this topic and disposes of the idea of saintly victimhood that is so erroneous when it comes to organized religious institutions like the Vatican.

Thank you for the suggestion but I’ve already read “The power and the Glory” and a number of other books by Greene (“The quiet American” , “The Comedians” , “Brighton rock” and “Our man in Havana”). Graham Greene is interesting as he did witness the Cristero war as a journalist but I think it is important to realise that as a writer he was a self declared Catholic and his books just like those of Shusaku Endo deal with the theme of spiritual struggle of maintaining faith. In that sense they are works that are biased in favour of Catholicism.

I do grasp the whole issue but evidently for whatever reason I don’t reach the same conclusion as you do that the Cristeros were heroic figures. I actually don’t see much of a distinction between the clandestine priests preaching and encouraging the Cristeros to do violence to other religious fundamentalism in other areas of the world and other periods of history.

Is the religious fundamentalism of the “Cristero war” really so different from the clerics that preach to the Taliban out of Pakistani Madrasas or to Wahabi extremists out of Saudi Arabian mosques ? or to the Ayatollah in the Iranian revolution or Ian Paisley invoking Biblical apocalyptic prophesies to agitate for secretarian violence in Northern Ireland ? Is it so different from Cults such as “Aum Shinrikyo” in Japan , the “Branch Davidians” at WACO, the “Heavens gate” at Rancho Santa Fe , or the “Peoples temple” in Jones town ? To me , personally all of those are simply fellow travellers of the Cristeros.

Probably the greatest similarity of the war is what happened in North-Eastern Brazil during the “Canudos war”. Just just like in the cristero conflict in Mexico you can point to the atrocities of the Brazilian government and the underlying socio-economic conditions of poverty and societal decay through which religious faith sustained these people. Just like in 1920’s Mexico you can point out that it was a war sparked by secular governments that oppressed the right of religious freedom of expression through terrible and quite frankly evil violence and you would be right to say this.

But when these religious movements begin to arm themselves to the teeth and commit violence and massacres of non combatants and impose their fundamentalist belief systems on other peoples at gun point or the blade of a machete then I can’t see them as heroic at all. Neither can I conceive of them as being any different in a moral or ethical sense in their fanatical use of violence from that perpetrated by any secular State.