Obscura Academy Challenge: Pen a Story Based on an Intriguing First Line

Welcome to the discussion for the latest Obscura Academy challenge: Pen a Story Based on an Intriguing First Line. You can share your short stories along with any comments and thoughts in the conversation below.

We can’t wait to read what you’ve written!

On the island of Tashirojima in the Miyagi Prefecture, the cats outnumber people, and the people like it that way. But on the other side of the world, there’s a small village where the people are outnumbered by a herd of vicious, bloodthirsty alpacas, and no one goes outside during the new moon.

On a small island in the Pacific Ocean, the residents cower in fear as massive casts of crabs take over their dwellings twice a month. The crabs lie in bed, waiting for the people to bring them large baskets of fish, barnacles, plants, snails, shrimp, and worms. Only after they are satiated do the invaders return to the sea.

In a part of one of Switzerland’s cantons, which I have agreed not to name, the population stays at home every other Tuesday between the hours of midnight and 4 a.m. when the marmots and snow voles invade the town and devour everything in their path.

It’s hard to estimate the number of places where the people are outnumbered by local fauna; and there are those who swear that revealing the secret will bring on further attacks. I talked to a man would not reveal his birthplace, but shared the terrifying story of the dingoes who…well, it’s safe to say you’ve seen the movie and according to him “Doesn’t know it by ‘arf”.

No one knows why these people suffer such tribulations, while others get along famously with their resident species. Scientists have been studying them for years, and some have also fallen victim to this phenomenon. A graduate student on one of the south Antarctic islands disappeared, having ignored his team’s warnings about the massive waddles of bitter, vengeful penguins who emerge when the temperature hits 11°C and take their toll.

On the island of Tashirojima in the Miyagi Prefecture, the cats outnumber people, and the people like it that way. I hope this continues, but to prepare for the inevitable day when the cats turn on them would not go amiss.

Marimo might be the cutest plant on Earth. And the deadliest. The agency needed a fail-safe emissary to infiltrate the target and knew Marimo, pretty, petite, fit, and brilliant, would easily charm the advance guards and outwit the superiors. The agency charged with dissolving threats and seizing assets could not have found a more capable or unsettling executrix than Marimo who knew the culture, spoke the language, and was conspicuously motivated. When she was recruited her unique skills were known to the agency and her work ethic and efficiency both impressed and disturbed them. Their choice was foregone even knowing they could face trust and containment issues with Marimo.

(It may be the beginning of a thousand stories or a declassified snippet of one. Who knows.)

Marimo might be
the cutest plant on this Earth
thanks to trickery.

Jean-Jacques Megel-Nuber didn’t always imagine he’d be living in his bookshop, but he knew he wanted it to move.

He’d tried to leave the premises several times since the untimely passing of his parents. Although he could get over their shared demise – an unfortunate accident involving a set of shelves suffering from the shell shock it acquired from a volume of war poetry – he could never get over the threshold and out the front door.

Eventually, his memory conspired to remind him of something his grandmama had told him a few days before her own untimely death, swallowed whole by a Swedish edition of Virgina Woolf’s Orlando: “Every book contains a soul, and souls require constant company. Without that, the outcome is inevitably a dark and shredding descent into nightmarish insanity, abject chaos and complete cosmic disorder.”

The bookshop was located on a blustery wind tunnel of a street in a bleak and wintery city. As Jean-Jacques was a feeble, ailing young fellow – nourished and sustained mostly by the glum literature and shadows on offer in the bookshop and not fun, food, sunshine and family-friendly sitcoms like most kids – he really suffered in the conditions. The constant draughts that rattled through the bookshop’s rafters chilled his bones and tormented his psyche. Without his parents or grandparents around to distract him a little, the young man began to feel unbearably cold and unbearably isolated.

One night, fearing that he’d freeze to death cold and alone, he called out to the bookshop around him to express his fears. At the end of a cathartic outburst several constant-winters in the making, he decared that the two of them – both bookshop and owner – must move elsewhere at once.

But poor Jean-Jacques refused to back down. With palpable anguish he outlined their perilous position and convinced the bookshop that his frail human body would surely perish and die if he remained where he was. The bookshop heard how, without a custodian and unoccupied, its insides would be raided by indifferent bureaucrats and entrepreneurial carpetbaggers and eventually converted into a coffee chain branch or an electric cigarette emporium.

Horrified at a prospect worse than all Kafka’s nightmares combined, the bookshop agreed to its owner’s request. There was a sticking point, however, for the bookshop expressed doubt about its ability to move, feeling it was just way too heavy. Possibly wise beyond his years or maybe simply inspired by desperation, Jean-Jacques had a solution, however, and said solution would proverbially kill two birds with one stone. (Or, to be more accurate, kill two metaphorical albatrosses with one flaming room full of depressing reading material.)

Before dawn had dawned, Jean-Jacques had burnt through all the thousands and thousands of books in an upstairs spare bedroom that his father had designated the ‘Misery Lit and Tragic Life Memoirs’ stock space. He’d over-ordered during the misery-lit boom years of the early new Millennium before such harrowing and hopeless reading was supplanted by the rise of true crime, translated autofiction and YA afrofuturism.

All those tomes served no purpose to anyone beyond functioning as a symbolic memento of his father’s flaws and a reminder that there’s a lot of pain and trauma in the world. Jean-Jacques, thus, happily torched them all. He found his body warmed and his spirits lifted and the bookshop found itself, likewise, lighter.

So light, in fact, that it could leap up and away from its foundations. Bounding beyond the edge of the bleak and wintery city, the pair gallivanted and globetrotted across the continents in an action-packed odyssey later to be chronicled in verse form by Lord Byron. (Except Byron never finished it because the early cantos got eaten by his pet bear and the poet couldn’t be bothered starting again while he was occupied with the Greek War of Independence.)

Eventually, Jean-Jacques and the bookshop decided to call time on their escapades and adventures in order to settle down. They found the perfect site somewhere in the sunny southern hemisphere and soon discovered that customers would not be hard to come by, for wherever you go you’ll find folk attracted to the smell of paperback pages, the dust of ages and odd people who want to tell you what you should and shouldn’t be reading. So it was that both Jean-Jacques and the bookshop found new peace, purpose and joy in life, and they lived that life happily ever after.

(Until the publishers demanded a sequel in time for the Christmas shopping season.)

In the Fishlake National Forest in Utah, a giant has lived quietly for the past 80,000 years.

The giant, whom local residents will soon know by her preferred name of “Judy”, produces surprisingly deft woven mats and rugs, given her enormous hands, and has a penchant for word games. Unfortunately for her fellow players, her vocabulary is 80,000 years old.

It was a normal day at the lab for Dave Remson until of of the unnatural guests escaped from from its room. As the alarms were triggered, Dave sealed the other rooms to prevent any other containment breaches from occurring.

The professional soldiers filled the hallways as the regular, daily, staff went into hiding in protected, and fortified, bunkers. The armed men were wearing thick tungsten body plates and carried weapons with ammunition the size of tennis balls. They surveyed the area non-stop with little information they had from Professor Remson about the beast. But as the day continued, nothing seemed to happen till nightfall.

One of the squads were reported respondent at 20:30. Later that night, another squad was reported missing during 20:45 with another group found dead by 21:10. The crews dead bodies laid lifeless, their tungsten plates were shattered across the blood stained floor with only the cracked chunks of the armor still attached to some of the bodies. The setting showed signs of gunfire due to the dents in the walls and bullets laid out, randomly, across the dark floor.

Between 23:45 and 24:55, the beast made an appearance through the security system. Cameras in the area revealed it clawing into one of the other rooms containing another one of the unnatural guests. The beast showed itself as a maraknya creature. It had four, unnaturally shaped, keen ended legs. Its face and torso was disfigured as his two arms, one being shorter than the other one, looked like ink sacks with claws at the end of it. Below the torso, where legs should be for its humanoid body, were missing, only with fleshy tubes lingering out, dripping a dark substance that only appeared to drip every so hour. After some examining by the squads, the creature stopped clawing at the door, then left. 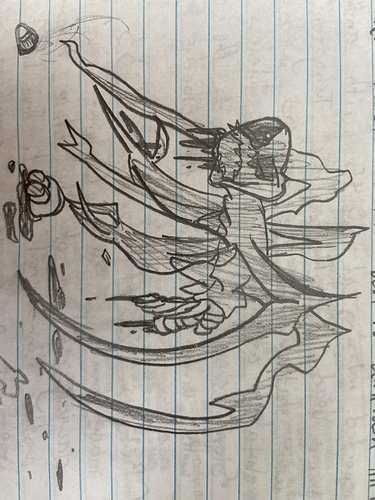 It was 03:25 when Professor Remson, and his fellow staff, last gained contact with the soldiers. When they were rescued by the military, no remains of the squads of soldiers were found. All that was left were hollowed out pipes, walls, ceilings, even empty rooms, one of them being on of the neighboring bunkers. The lab was abandoned and the beast continued to roam the halls, feeding on the other unnatural creatures it could gets its claws on. Later that year, the beast was confirmed to be unmatched by another creature that breached its forgotten containment. Till this day, the new creature is still unidentified by the military and continues to roam the blotted out lab.

It’s said that not all who wander are lost, and that’s mostly true. But sometimes you need to find your dinner so you can find yourself. I’d spent a good few hours roaming the streets, trying to find my one perfect restaurant, my one place to call home. Boston has an absolute bounty of them, but I might as well have been Sisyphus with his boulder, in my attempt to reach my one desired establishment. The city stretched out, an endless labyrinth. A beating, roiling heart of concrete, steel, and glass gave way to mazes of brick and stone, plaster and plywood forests, stretching unto the distant horizon. And every ring, every layer of the megalopolis was alive with the bustle of restaurants, with people hungry for life, with distinct cuisines ripe with self knowledge.