Welcome to the Atlas Obscura Community discussion of Okanagan Sockeye Salmon. Ask questions or share tips, experiences, pictures, or general comments with the community. For the story behind this food, check out the Atlas Obscura entry: 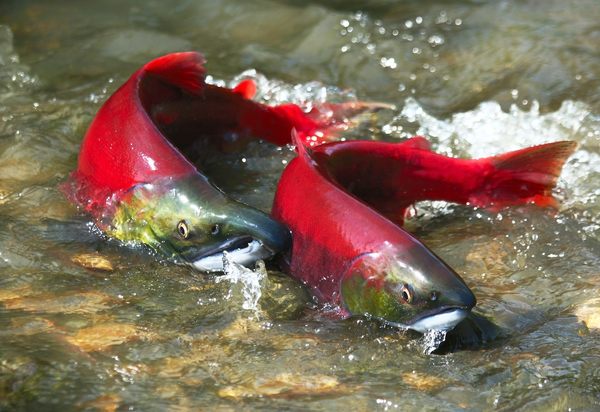 Around British Columbia's Osoyoos Lake, community efforts have revived the population of a fluorescent fish.

There’s been strong scientific evidence of climate change since at least the 1970s, but the oil companies made sure to obscure it in the public media. But it’s been there if you were looking in the right places. One example: in Minnesota, sport fishing is huge–both open water and ice fishing. But you have to know how thick the ice is to be safe. So, for all of their more-than-10,000 fishable lakes, there are records going back into the 1800s of ice thickness in midwinter and also of the “ice-out” date, which is the day when the ice cover is broken enough for boats to navigate the whole lake. Over the last 125 years, you can see a steady decrease in average midwinter ice thickness (meaning the winters have trended warmer), and the ice-out dates have moved slowly earlier and earlier such that they are now about a month earlier.

Head in sand mentality usually results in extinction of that species

There is also strong scientific studies that the earth goes thru climate cycles and has for millions of yrs. Archeologists have proven this.

And that’s exactly where your head is.We’ve been going thru hot and cold changes for millions of yrs.

Certainly, the Earth has been going through climate cycles for millions (actually, billions) of years. Scientists have found plenty of evidence for that (they’d be paleontologists, actually, who study life going back millions of years, and climatologists, who study–yep–climate cycles, more than archaeologists, who study just the past few thousand years of human history, but let’s just agree–“scientists”.) So, since you agree that scientists have evidence for climate change, I don’t understand why you’d “stop reading” this article when they mentioned climate change. (Naw, just yanking your chain! : ) We all know where you’re coming from. You’re one of the poor souls who somehow bought that, while climate change may be real, HUMANS can’t be causing or contributing to it by burning fossil fuels.) Now, why would you be so hostile to that very-scientifically-testable idea? Could it be because some very rich people, who GOT very rich selling fossil fuels, don’t want us to stop buying them? And that, since the 1970s when scientists first began to warn that the globe was warming, and that the warming tracked with our increasing use of fossil fuels over the past 200 years, those rich people hired expensive P.R. firms and lobbyists and even lawyers who sued scientists, trying to squelch the idea that burning fossil fuels might be bad for the planet? Just a little science to chew on: some data shows the natural climate cycles of this planet headed into a long-term deep-cold ice age until humans (and our use of fire for cooking, hunting, and farming) came along. Instead, we’ve had an unusual cycle of smaller ice ages and glacier-free times. Burning wood may have staved off a new “snowball Earth” already. Meanwhile, in 1700, there were less than 500 million humans alive on the planet. We started burning fossil fuels in large quantities with the Industrial Revolution, about 1750. We invented steam engines that used coal, then internal-combustion engines that ran on petroleum, and then a whole bunch of uses for natural gas. We also invented better medicine and better agriculture. World human population hit one billion about 1900. Between 1900 and 2000, we invented the automobile, the airplane, the jet engine, the refrigerator, and the rocket. As we invented these useful machines, we also invented better and better medicine and better and better agriculture, and the human population began to skyrocket. So we had more and more people who wanted a car, a refrigerator, goods shipped by diesel truck and train and ship and by airplanes burning kerosene. World human population is now almost 8 billion. And all of us are using fossil fuels. The amount of CO2 added to the atmosphere from all these people burning coal, oil, and gas since 1800 has dwarfed all the CO2 added by humans before 1800. It’s a lot. It’s a hell of a lot. And scientific measurement is showing that it IS changing the climate, on top of the natural cycles which have always existed. The only reason to believe our scientists when they say “we see evidence that the earth and sun have natural cycles” but NOT believe the same scientists when they say “we see evidence that human-produced CO2 is also influencing the climate” is that, for some reason, you don’t want human-caused climate change to be true. And the only reason for THAT is if you make your living selling fossil fuels, or are parroting the words of someone who does.