Hello out there! I’m planning a 6 week cross country (USA) road trip with my 7 year old son! I’m sure there is some way to enter our route in to see specific highlights along the way but I’m just not seeing how to navigate that. Thanks so much!

Hi Emily! As it so happens, I’m doing the same, in my case planning a trip from New York to New Mexico for the end of May.

I can confirm that, unfortunately, we don’t yet have a route planning tool that does exactly what you’re looking for, but we do see it as a future feature for our app. In the meantime, I can point you to a “beta” tool that should get you about 80% of the way there: 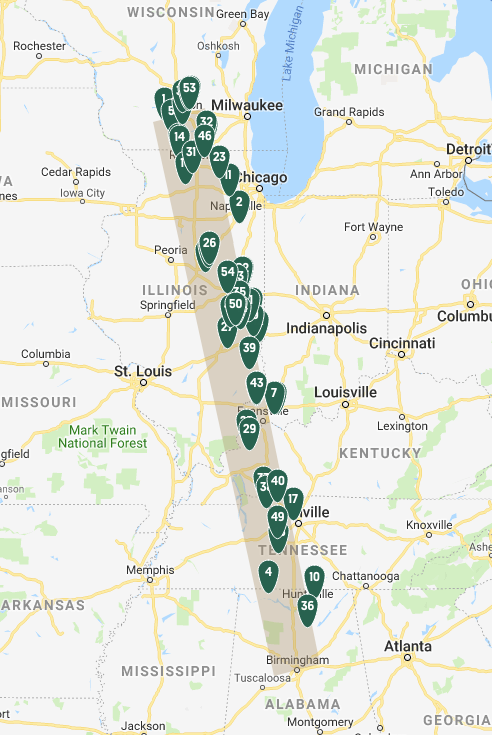 Discover unusual places to visit on your next journey

Enter the start and end points to find Atlas Obscura places on your route.

I say 80% of the way because it’s “as the crow flies” rather than via roads. So in some cases, it works very well. But in other cases, unless you have access to a boat, not so much.

But if you play with it enough, you should get some good results. It often requires shortening the distance between two points.

Finally, one more note on this, it’s an added step that takes a bit of triangulation, but I usually use the Atlas Obscura list tool while planning as well. So basically see what’s along the way, and then add those places to a list. Here’s an example of that: https://www.atlasobscura.com/users/tyler/lists/2020-cross-country

Hi! Sounds fun! Where are you starting from, if you don’t mind me asking?

If you are going to do a cross country trip, the first thing that always comes to mind is Route 66! I just recently did all of it through Arizona (and a few spots in CA) and it was super fun - lots of interesting things to see. Arizona has the longest part of 66 that is still intact…some 158 miles I believe. When I went in early April there were not a lot of people on the road at all, and lots to explore.

Happy to help with any tips if I can!

Awesome! Thank you!
This is exactly what I was looking for. Great info!

Awesome! Thank you. This is exactly what I was looking for!

I’m headed from Portland OR to Denver to Albuquerque to New Orleans and ending up in North Carolina. And then back again, I’m thinking North for the return trip.

Ah ok. So there’s really 2 routes you can go - down through Idaho/Utah (which takes you past a LOT of natural beauty) or down through California - if leaving Portland you would head down to Eugene and keep going south until you get to Needles, CA where you’d meet I-40, which runs parallel to Route 66 in some parts of CA and AZ. It’s pretty much a straight shot from Needles to Kingman, AZ through to the NM border. Along the way there are a lot of awesome little towns and roadside attraction type of stuff…lots of history - some Disney “Cars” stuff (in case your little guy is into that), a meteor crater (in case he likes science), Petrified Forest National Park/Painted Desert (which is IMHO a very underrated national park) the abandoned Two Guns site, and lots more. I’ve taken a lot of road trips but this one I just took through AZ was my favorite of all time. (And bonus…not a lot of people on the old road!)

If you are ultimately going to end up in New Orleans (which is AWESOME and one of my favorite cities) then you can continue on 66 through Amarillo, TX and down to Dallas, where you can catch the interstate again to NOLA.

Having moved from FL to WA a few years ago (and back again) I have made cross country trips using 2 different routes, and I have to say that the one going up through Utah/Idaho was nice for scenery, but sticking to a route where there was more roadside attraction type stuff was more fun.

It will all depend on how much time you have as well…but I would recommend the California/Route 66 & I40 way to Albuquerque.

Hope that is helpful!

Thank you. it helped me.

After your road trip with your son, share your adventure story with us…