I’m not sure what this is, but it’s definitely not human. This photo was taken in a community forest in Eureka, California, which is not far from the Bigfoot capital of the world, Willow Creek. Whatever it is, it’s about 50 feet off the ground on some sort of platform. Details at https://kingbigfoot.com/bigfoot-eureka-park 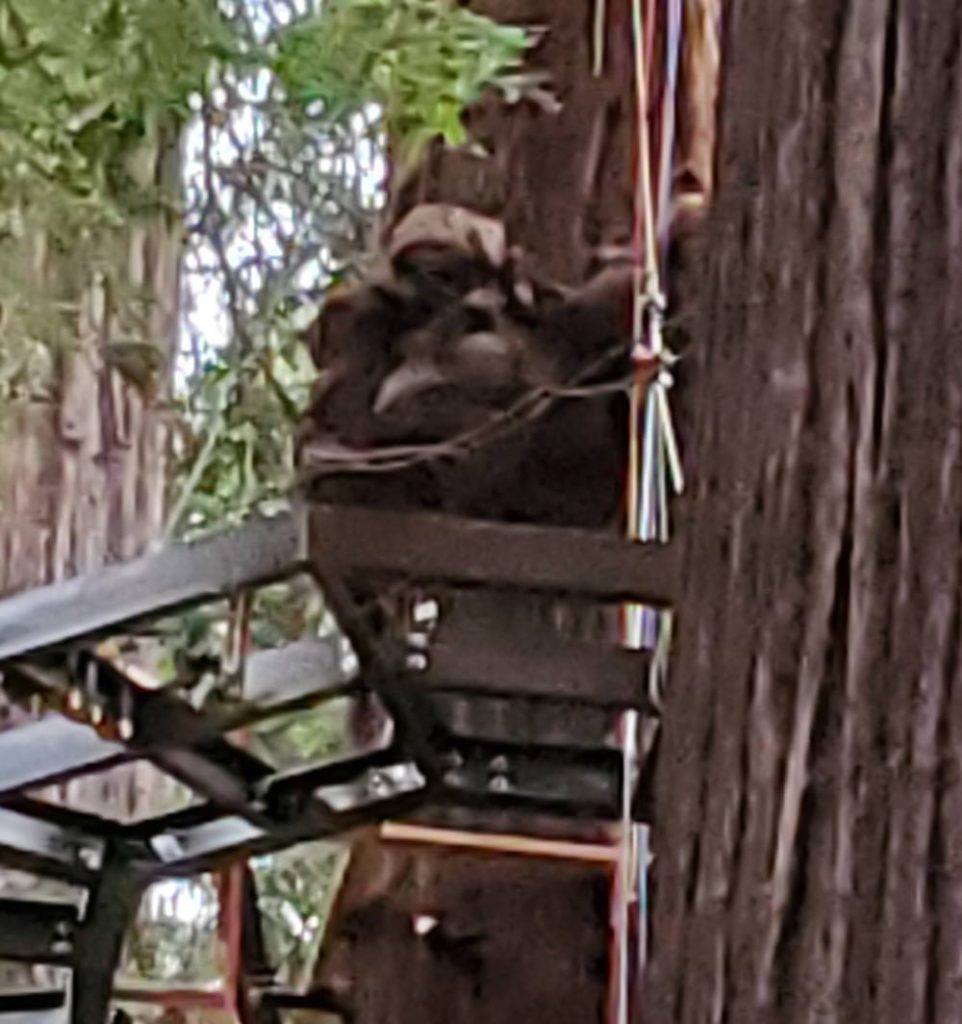 Three billion smart phones, yet bigfoot is still managing to avoid being photographed.

Yep…what Patrick said. I am a 5th generation Californian. Had my children stayed here our family would be 7th generation now (but that is another story.) Anyhow, with ancestors that lived, worked and traveled the state, some working in the forests, some sheriffs and many other occupations building this state, no one in my family, nor anyone they have ever talked to has ever saw Bigfoot. It’s just not true and a tired tale.

I do find the newer tale of Dogmen to be more fun and entertaining now though. Especially playing the tales when camping in the forest for older children and adults that are there too, right before bed. Want to learn more about Dogman Encounters? Well, you've come to the right place!

I would not even try to convince anyone the Bigfoot is real nor even expect anyone to believe me when I say, yes, Bigfoot whatever it may be is a real physical animal of some kind. This is because I have seen its tracks, heard its screams, seen numerous signs of its presence since September 2000. My daughter saw one run across the road in front of her car in 2003 coming home from work one night. The following morning she packed her things and moved to town. She did not tell us about it until months later. The reason she waited was the same reason numerous people who have seen one here on the Red River in Texas and Oklahoma have not. Open ridicule and disbelief. Members of the Choctaw Nation in Durant, Oklahoma confided a great deal of information about them. They encountered them since they arrived in the “Indian Territory” in 1831. A Choctaw man had recently been killed by one near Broken Bow, Oklahoma when they chose to open up to me. Few Choctaw will speak to an Anglo about such things. Those that will in Pushmataha County, Oklahoma where these things are most prevalent meet with disbelief and ridicule like anybody else. Only those who have had an encounter will speak of it to someone else who has had one and then only hesitantly.
Yes, there have been many hoaxes and lies about Bigfoot and this only causes people who have actual experience to keep quiet about it. Prior to moving here in 1985 I would not have believed them either. There are simply too many known biological facts about primates present and extinct that cannot be reconciled with eyewitness accounts. Still those who have actual encounters do not believe; they KNOW. And as to why there have been no photos or film, there are. On youtube, there is a compilation of the very best photographic evidence. Of those I have seen there are perhaps half a dozen I deem credible or worthy of further scientific investigation by professional biologists, anthropologists or other forensic specialists. Getting one or funding for such an investigation is even more difficult than getting a competent professional investigation of the UFO phenomenon. To do so virtually assures the end of one’s professional career and the discrediting of ones previous life work. Eventually someone may take the risk and succeed just as was done with plate tectonics and continental drift. I have no expectations of that occurring in the time I have left. But I had no expectations that empirical evidence of modern humans dating to 300,000 YBP would be announced at Jebel Irhoud, Morocco in 2018 or a fully developed megalithic culture dating to at least 11,130 years at Gobekli Tepe, Turkey would be discovered in 1995 and publicly announced by Smithsonian in 2008. It’s pointless to mention what was discovered in North Africa, February of this year by Max Planck Institute for the Science of Human History. No belief asked or required.