Hello lovely Atlas Obscurians! I’m planning a leisurely long weekend along the Kentucky bourbon trail, and I’d love to break up the tastings with some side trips to unusual places. Aside from what is on AtlasObscura.com, do you have any recommendations for Lexington, Louisville, or the places in between?

The Shaker Village at Pleasant Hill is near Lexington and well worth visiting. The Shakers, for all their peculiarities, were a remarkable community, producing a unique style of architecture and furniture design; austere, but quite beautiful. The setting is lovely; the restaurant serves comfort food. And you can reserve a room. After the Bourbon Trail it might be a nice place to sober up.
Kentucky is beautiful, especially around Lexington. You’ll have a wonderful trip.

That’s a wonderful suggestion - I’m familiar with the Shakers in NY/MA, and have always been fascinated by their stories. I’ve also learned that there’s a lot of interesting people who are around Shaker Villages (of all sorts), which leads to very interesting conversations. Thanks so much, Ray!

I don’t know if Louisville is part of your itinerary, but that’s my town, and if you need any suggestions regarding restaurants, let me know. The downtown places tend to be overpriced and touristy. But if you’re looking for a lovely bourbon bar, and also a fine restaurant I would recommend Bourbons Bistro on Frankfort Avenue. Happy trails!

I actually do think I’ll end up with an evening in Louisville - and I do think I’ll have time to check out Bourbons Bistro! I really appreciate the recommendation, thank you so much!

I’ve visited the Lexington KY area. The one unusual landmark I remember was this one in Versailles (not far from the horse racetrack as my memory serves): 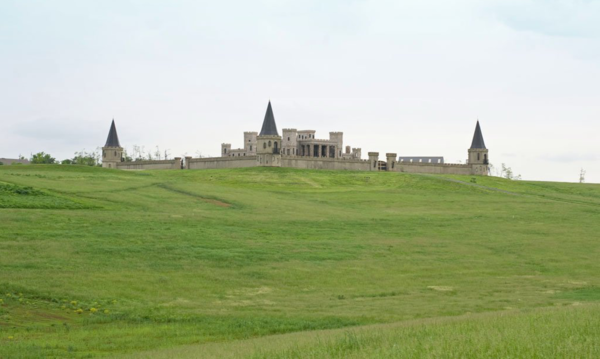 This modern castle sat empty for decades before a fire inspired its builders to complete its luxury halls.

NE of L’ville, off 71 is LaGrange (not of ZZ Top fame) a small town with a main railway running down the middle of main street. I visited there in 2015, arrived at 5 pm, stopped in a restaurant, met the mayor - a gregarious guy who regaled with reasons why LaGrange is wonderful, mostly the railroad.
While there, go to the west edge of town, to the Anita Springs subdivision. Into the subdivision, left, then right, and on an open hillside lot is a very old looking stone spring house. My great, great, grandfather Berry, the country doctor, had bought 200 acres including springs just west of La Grange from the descendants of the original land grant holder Lt. John Russell. There was railroad track frontage. The springs became named Anita Springs, his wife’s name was Anita. In 1894 he started sending spring water to friends in Louisville, the water demand grew, in 1903 he opened Anita Spring Water Company in Louisville at 721 S. Second St. The family homestead - where my grandmother and her four sisters were born no longer stands. But one of the original spring houses is there. Have fun.

You will find Frankfort, Kentucky (KY’s capital city) midway between Lexington and Louisville. It has a few things of interest. Buffalo Trace Distillery offers tours with tastings and has much history to impart. Daniel Boone’s grave is in the Frankfort Cemetery and is a great spot to take a panoramic photo of downtown Frankfort. Liberty Hall is one of the earliest of the downtown structures that boasts their very own ghost, The Gray Lady (ask to see the photo of her). Bourbon on Main is a great place to eat and, as the name hints, has a great stock of bourbon. If bourbon isn’t your thing, Sig Luscher Brewery just opened and touts a damn nice Lager. If your sweet tooth is calling, Rebecca Ruth Candies offers tours and is home to the bourbon ball. For a less formal meal, try Rick’s White Light Diner on the south side of The Singing Bridge (which moans as you drive across the steel grated surface).

That sounds so interesting! Thanks for sharing, Oss.

Ah, I’ll look out for it along the bourbon trail! Apparently it’s now a luxury hotel and event hall… if I lived in another tax bracket, I would have stayed there!

That’s an awesome history, Oss! I’m planning on taking a three hour train tour of the area - maybe I’ll be able to cross tracks with your old family homestead.

@desmoprem - Bourbon is ABSOLUTELY my thing, those are great recommendations! I’ve signed up for the Hard Hat Tour of Buffalo Trace for a deeper behind-the-scenes look, and cannot wait to try bourbon balls. I also am so excited to learn about the Singing Bridge - what a hidden gem!

Larissa, I would imagine that the hard hat tour of Buffalo Trace will include the Bourbon Pompeii exhibit. During an upgrade to one of the old storage buildings, they uncovered a series of fermentation tanks that had been buried under the floor. They have brought these vats back to life and are now making Col. E.H Taylor bourbon in them. Bourbon is also my thing too. I’m a member of the Frankfort Bourbon Society and we enjoy a number of barrel picks each year as it has become very difficult to find the good stuff in liquor stores. If you are wanting to shop for bourbon in downtown Frankfort, about a mile from Buffalo Trace, Try Capital Cellars, Across Broadway from the Old State House (which is worthy of a visit as well). Enjoy.

Piqued my curiosity: There’s a tour on a train? If so, you will most certainly pass down the main street of La Grange and right through the former Anita Springs stop where they loaded the water on board. “cross tracks” well played.

@desmoprem I cannot think of a more beautiful combination of words than “Bourbon Pompeii.” Thank you so much, maybe I’ll run into you at Capital Cellars this weekend!

@oss, I’m not sure of the route, but My Old Kentucky Dinner Train promises to pass by many points of interest along it’s 3-4 hour ride!

The train she is talking about is out of Bardstown.