Welcome to the discussion thread for the story, Searching for ‘Spooklights’ in Southern Georgia. You can share your comments and thoughts about the story in the conversation below.

I’m sorry you didn’t see that particular light but they are very much real. The most active one I have ever seen is “The Screven Spooklight.” Located between the sleepy town of Screven and the city of Jesup. If you travel along US84 you will see a road sign for Bennett Road. It will take you down a dirt road half barren from timber cut. You’ll twist and turn until you come upon a simple railroad crossing. If you get out and stand on the crossing look North towards Jesup. If you look south you’ll see a bright red signal for CSX Railroad. That is not the light, but keep in mind trains do use those rails so stay vigilant. Now as you look north and your eyes adjust you’ll see a red small light. This light over time with swing to one side of the track to the other like a conductor walking with a lantern. Sometimes it will change colors and burn brighter as it approaches you. It will however stop a distance away and dim as if someone is walking back with his lantern. Now make no mistake, respect this light. If you curse it or do disrespectful things, well lets just say something else will show up. If you’re ever in that part of the world again. I promise it’s worth a stop.

These lights are common in England, Ireland, Wales. I’ve seen them, too. One thing though: Why do people keep their headlights on? In my experience, you see more when you blend into the night.

I’ve seen the Cogdell light numerous times. I grew up in Clinch County and as teenagers we sought it out many times and many times not seeing it as well. Almost always following the instructions mentioned in the article. Thinking quite a bit about it while seeing it and through the years, it stuck me as some natural phenomenon. It was always white but more hazy and fluid.

There is another light not to far from there on what we called the Lakeland highway. It was Hwy 37. That light I witnessed only once. As a teenager, friends and myself sought that light out as well never seeing it. That light was much more spooky, intense, bright, all encompassing and the one time I did see it, I was alone traveling in a moving car East/Southeast on Hwy 37. I won’t go into all the details here but, things happened then I have no explanation for to this day. It was very unnatural and scared the beejeezus out of me. I hoped I would never see it again and I haven’t.

In August, 2012, I encountered 3 airborne lights that the Illinois Chapter of the Mutual UFO Network (MUFON) concluded after a thorough review, were operated by an intelligent source.

It was a pleasant, clear Thursday night, about 10:30. I was taking a shortcut to my brother’s house in Chicago’s south suburbs, past the town of Willow Springs, IL, then through the Cook County Forest Preserves.

As I approached a cross-road about 1/8th mile ahead, I saw what I thought were three car, or motorcycle headlights heading directly at me, and switching places with one another. 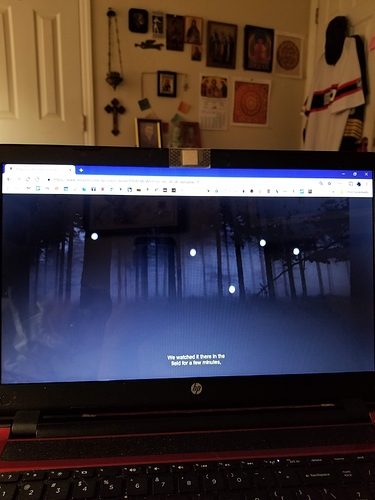 This is a screen shot from the UFO documentary, “Top 10 Best Evidence UFO Sightings.” It illustrates Col. Charles Halt’s description of the Rendelsham Forest, UK incident. It is the closest description to what I saw in August, 2012.

As they closed, they took on the size of basketballs. Suddenly, about 15 yards ahead of me, light 1 jumped out in front then took an extremely sharp right turn into the woods parallel to the road on my left.

Light 2 repeated the same move, following 1 into the woods and, like it’s counterparts, the 3 followed suit but was moving noticeably slower.

I noticed while looking into woods that the first two lights stopped, hovered together for maybe three seconds then "Number 1 took off in its original direction, 2 waited for 3 to catch up, then both followed the same route out of sight.

As I tried to figure out what the hell it was that I saw, the first thing that came to mind was that it resembled a training exercise with 1 as the ranking officer, 2 as the competent veteran, and 3 as the beginner. Regardless of the intent of these orbs, one fact was clear to me, they were operating under the direction of an intelligent source.

There are Tales of “Spook Lights” and other signs of the “paranormal” reported in about a 10-15 mile radius of the town of Willow Springs. It has it’s own hitchiking lady ghost, disappearing mourners standing at the graves of their lost loves, and yes, white orbs that seem to rise out of nowhere and suspend themselves over tombstones overtaken by weeds.

In all, the event took at most, about 90 seconds. It was the second “encounter,” the first at apx. the same time of night on the Ocean City, MD Boardwalk. My wife and I, and a handful of others watched as three orange-yellow discs rose from the ocean about an eighth of a mile out. (It’s always best, if possible, to be with your spouse which gives instant credibility in the telling if it.)They suspended themselves for maybe 30 seconds

then disappeared back in the water.

Both incidents made me appreciate the phrase, “… I know what I saw.”

Finally, it’s always good to know that others have had similar experiences especially in regards to these unexplained lights.