Escape tunnels, panic rooms, and hidden speakeasies. Behind the seemingly mundane and expected facades of buildings all across the globe, there are secret rooms and surprising features hiding just out of sight. 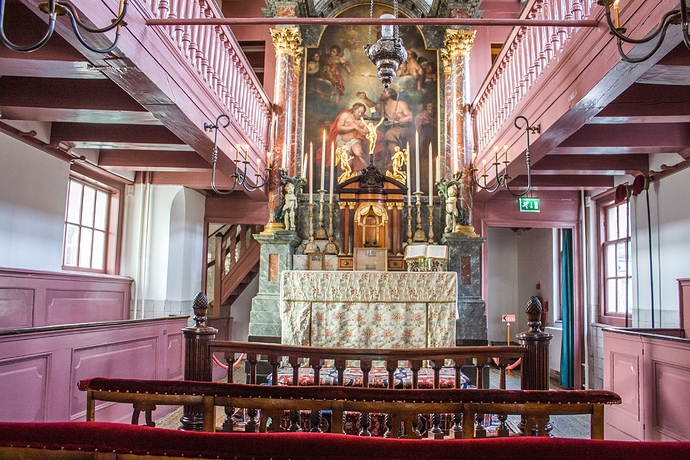 In Amsterdam, there’s a 400-year-old home with a mini Catholic church, constructed to allow citizens to continue worshipping during the persecution of Catholicism in 17th-century Holland. Today, you still wouldn’t be able to tell from the outside. At the Fairmount Hotel in San Francisco, you can find California’s most expensive penthouse suite. But look further and you’ll find a secret tunnel that President John F. Kennedy once used, accessed through a shifting bookcase. Inside M.S. Rau Antiques, in New Orleans exists a secret door painted to look like a bookcase. Behind it, a room filled with museum-quality artifacts and artwork from icons such as Rembrandt. This is just a shortlist of some of the buildings across the globe that hide wondrous secret features. Now, we’d like to see some of the places you’ve visited that had a hidden feature or secret that would put a spy’s haunted house to shame.

In the thread below, tell us about your journey through a place with covert features. Was there a secret room to explore, an underground escape tunnel, or perhaps a hidden laboratory such as in the Speculum Alchemiae of Prague? What was the building used for and how did the hidden feature come to be there? Be sure to include any pictures you might have as well. Your response may be included in an upcoming round-up article on Atlas Obscura. Let’s get clandestine and reveal those secrets that make these buildings even more special!

I’ve always been fascinated by secret doors and passages. Of those I’ve seen, the one at M.S. Rau might be my favorite, but I recently discovered another one here in the Tampa Bay Area inside the brewery “If I Brewed the World” 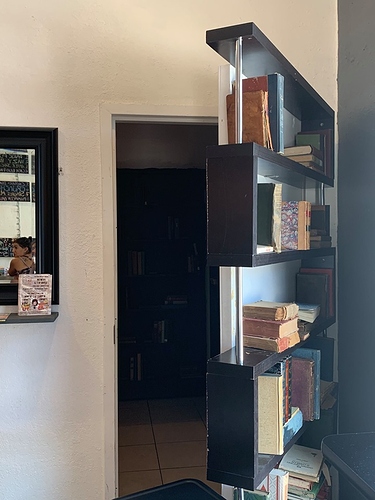 Where does it lead? To a brewmaster’s treasure room? An alchemists lair? Well, no. Just to the most literate bathroom I’ve ever seen. 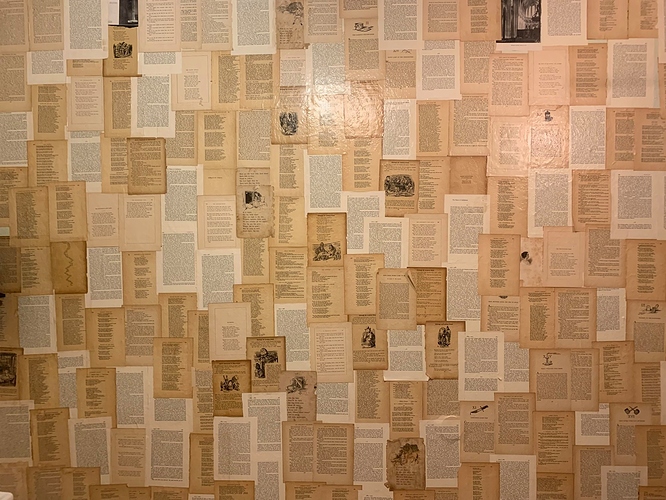 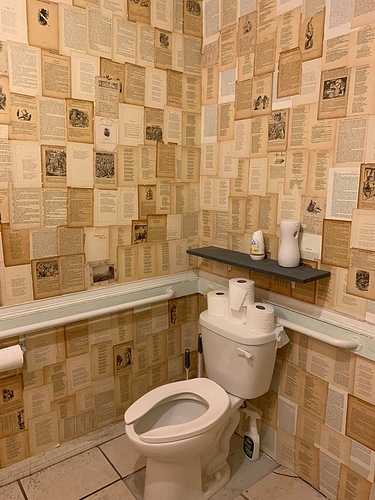 I’ve heard of a few others I’ll be looking for as well - all of them speakeasies: Ciro’s, Spook Easy (in Ybor) and Geek Easy a bit farther outside of town.

That’s so cool! The wallpaper especially. It’s like you’re inside of a book!

Agreed - I could see doing this in my home.

Mirror, mirror on the wall…take me to a hidden garden! 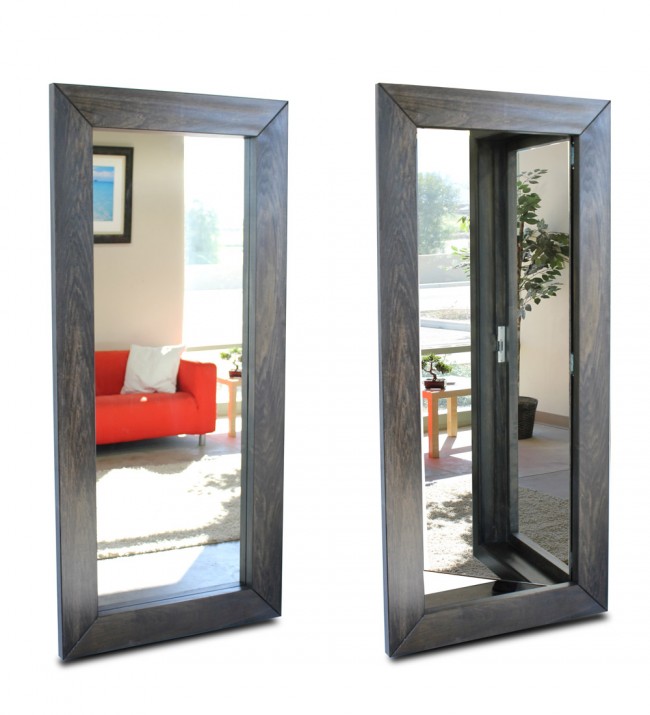 Home theater behind the ticket booth 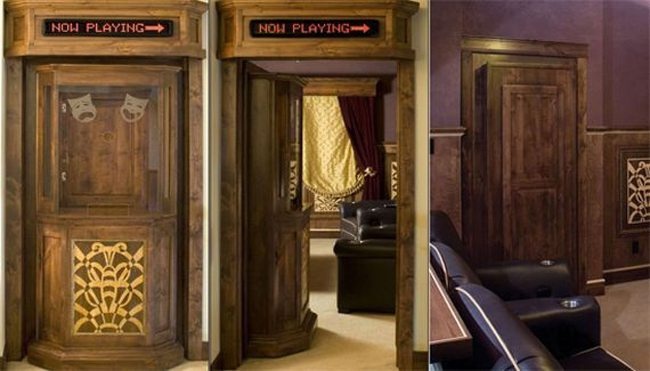 Not your ordinary garage door 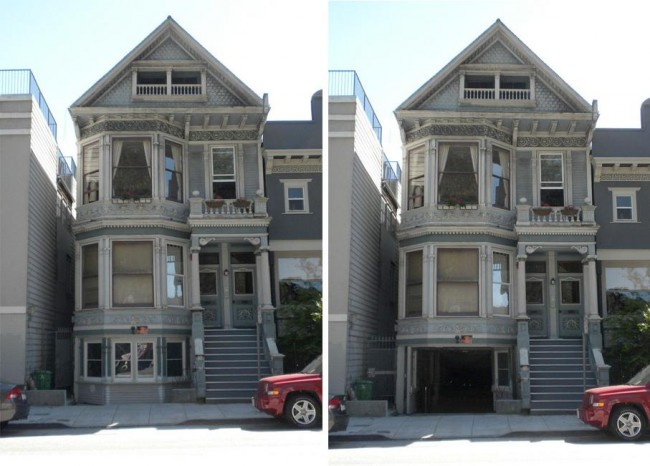 Enter through the wardrobe chest 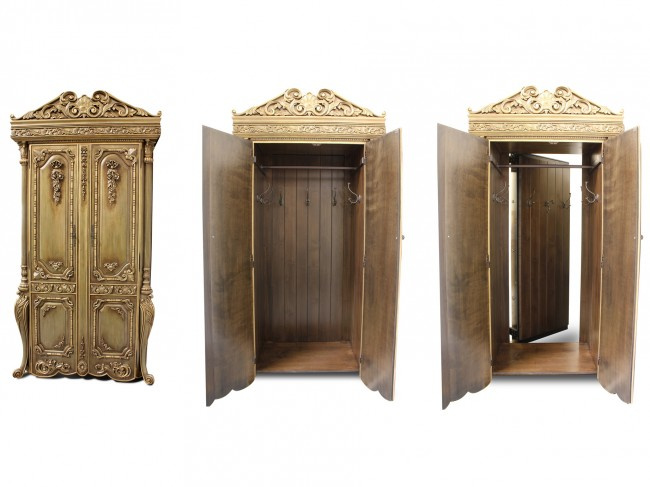 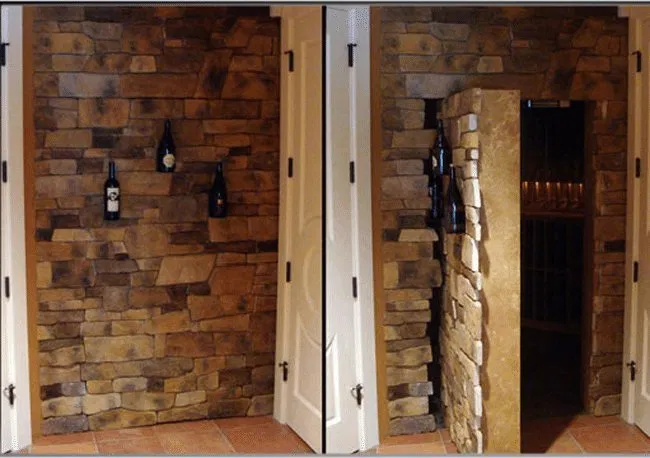 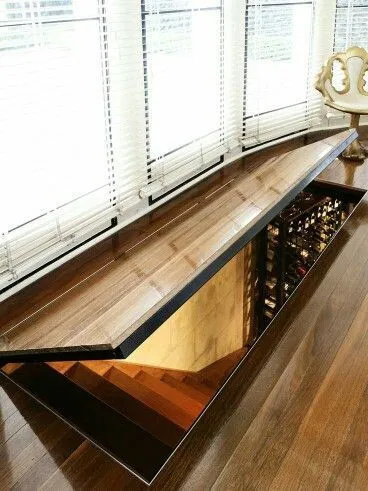 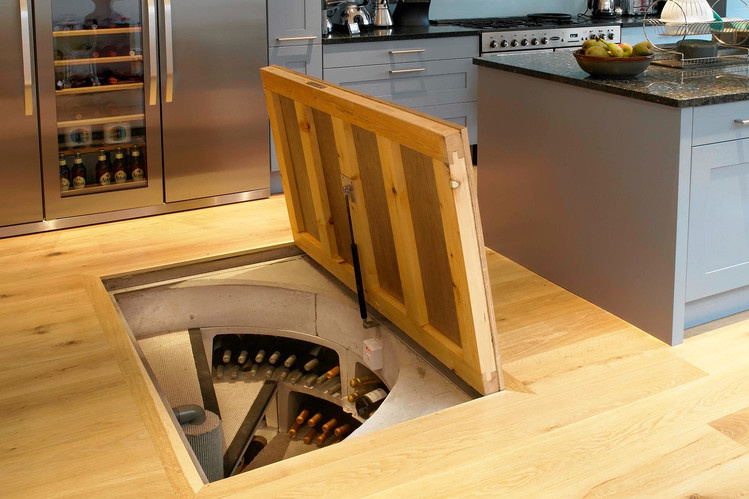 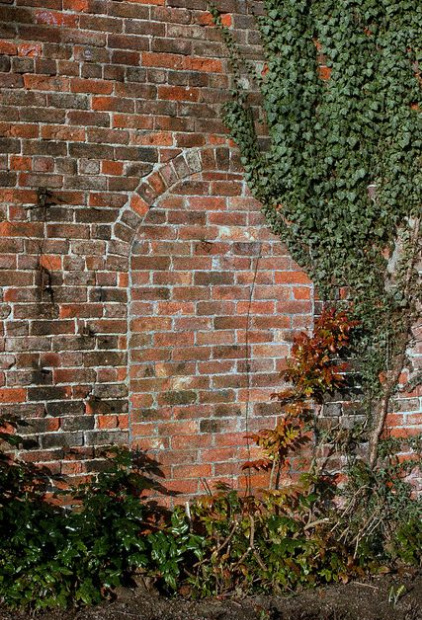 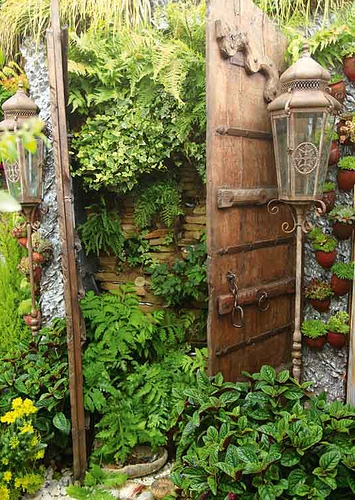 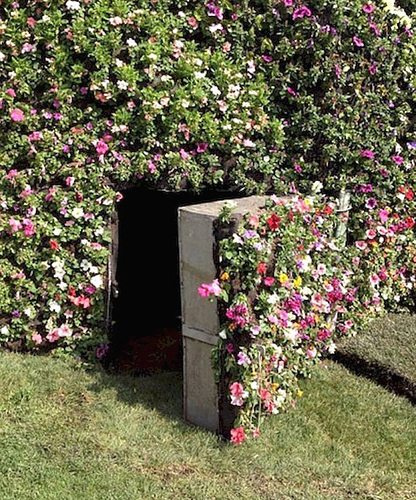 When I was in high school (class of ‘73) in Michigan, a group of us trustworthy senior students ran the school bookstore, selling pencils, notebooks, spirit wear, etc. for Student Council. We made a secret room, 6’ wide x at least 18’ long, by wiring together empty shipping boxes for a false wall just past the doorway. Inside we had a couch, a stereo & headphones, a t.v.; nothing toward ever happened within other than our leaving study hall under false pretenses to hang out. The best was being able to watch the World Series, as games were still played during the day then, and I believe it was Cincinatti v. Oakland that year. Our secret room lasted into spring—I don’t know how we were discovered, but the principal (former USAF, intelligence) called us in individually to say he would not discipline us or tell our parents, but we had to dismantle the room pronto. “Best ever subterfuge I’ve ever seen” he told us.

You are not allowed to take pictures within so I do not have one, but the Magic Castle in Hollywood CA has a small lobby off the entrance and the rest of the “castle” is accessed through a secret door in the book case that opens when the correct code words are used.

“The House of Seven Gables” (Hawthorne’s childhood home in Massachusetts) contains a hidden narrow brick stair constructed in rear side of a huge kitchen fireplace. Access to it is behind a large stack of wood fuel in left side alcove and stair is completely dark. Upon reaching the top a small door can be opened into a small room with fireplace that served as safe room from Indian raids. It also has passage into the attic where children played as told in Hawthorne’s book. The real surprise is that the exit door to the stairway completely disappears in the wall when the room is entered, and the latch to open it is also hidden within the fireplace. Really interesting experience.

The Mansion on O in Washington DC claims to have 70 secret doors. It’s a museum/art place full of random stuff from all over the world. When you do the tour you have the option to do a tour where you try to find all of the secret doors. Some are super obvious passageways between the 5 connected townhomes and others are less obvious like a small door you pull on and it reveals stairs up to a wooden bathtub. It’s nice way to spend an hour or two looking for all secret doors. I didn’t take any pictures of the secret doors but here are few from inside the Mansion. 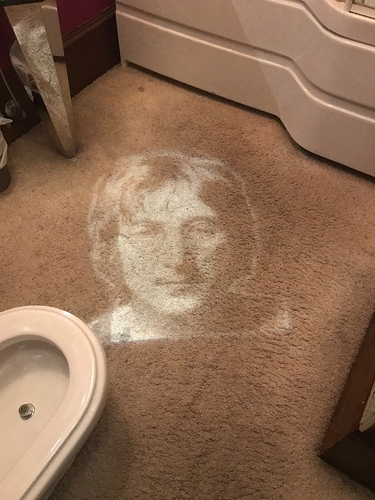 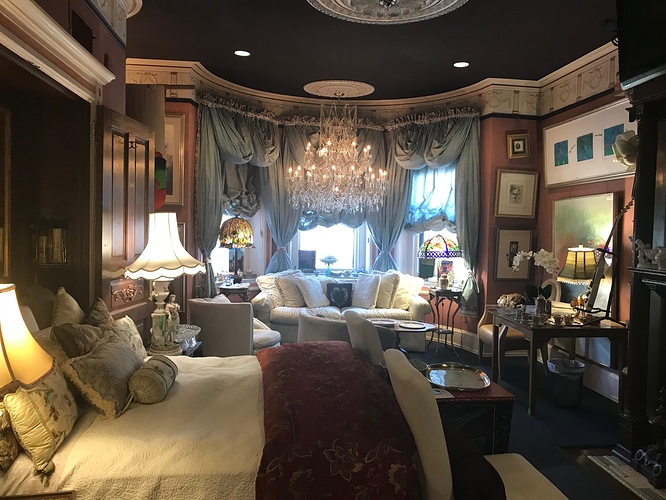 That wardrobe–is that the entrance to Narnia?

Pixar has two hidden miniature speakeasies, both built by animator Andrew Gordon. The first is the Love Lounge, a crawlspace behind the wall of Gordon’s office that’s set up as a Swingin’ 60s love nest. It’s become tradition for celebrity visitors to autograph the walls of the Love Lounge, so when you crawl in you can see the signatures of everyone from Annie Leibovitz to the Obamas.

Eventually Gordon moved to another office, where he promptly found another crawlspace and turned it into another speakeasy. This one is called the Lucky 7 and is even more elaborate, with an entrance accessed by pushing a button hidden in a bust. I’ve only been inside the Love Lounge, though, as the rooms are only accessible when the animators who use those offices are in. 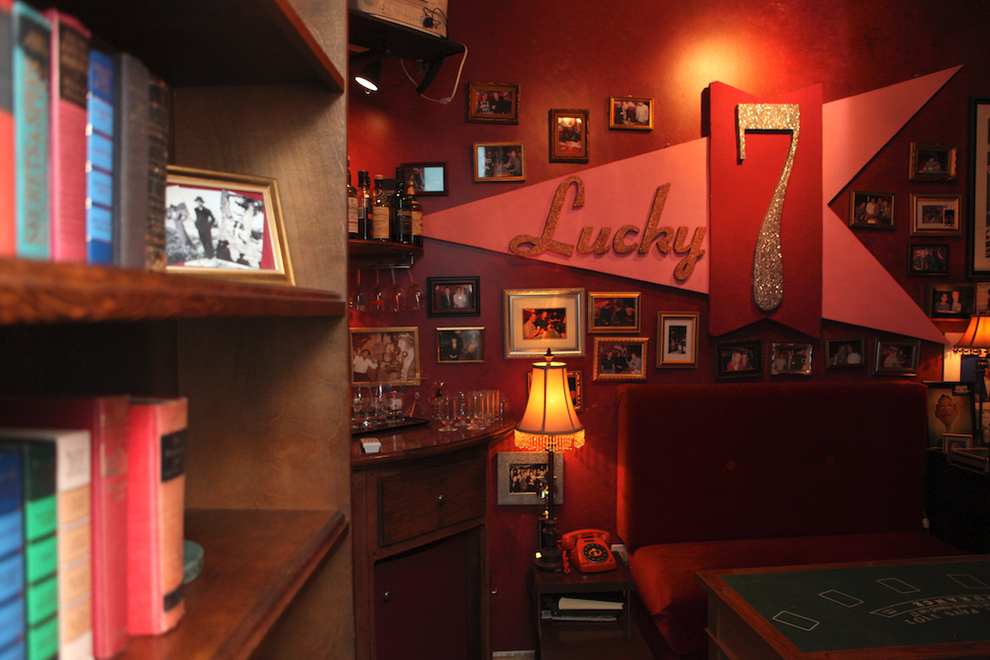 At the Redbull headquarters, you can take a carbon slide down to the ground floor instead using the stairs, at Google you can sit around and talk strategy in ski gondolas, but at the Pixar offices, there's something special that didn't... 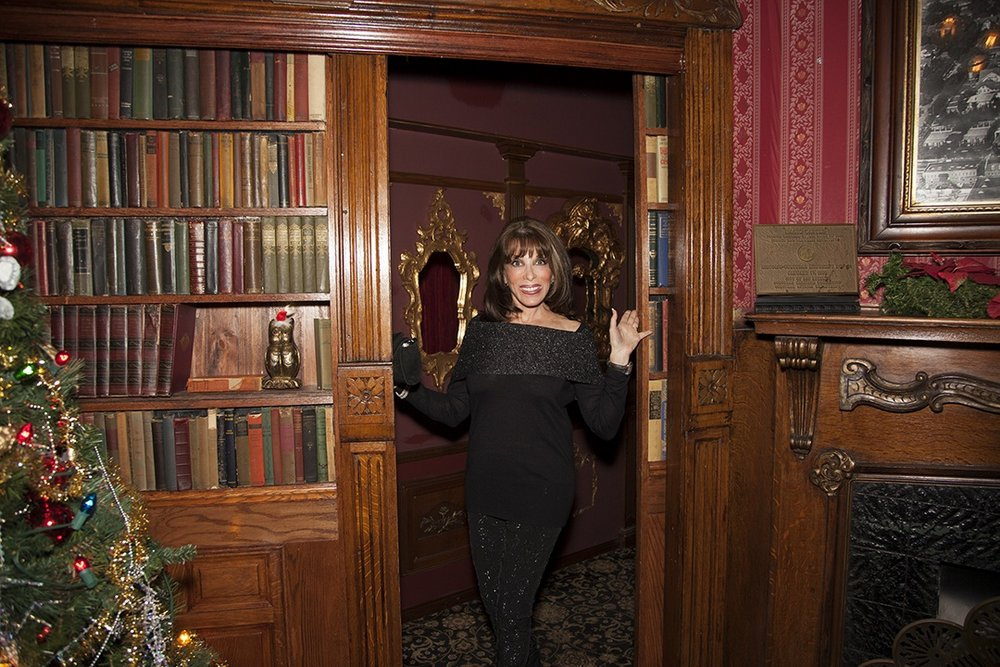 I have been in three bars with hidden (but public) back rooms. One in Portland, OR where there is a code box hidden in a book, one in Boston, MA, past the bathrooms and the shoe shine and one in Seattle WA where you call up on a small black telephone. I sort of collect hidden bars, and while these are bars in bars, I think they count.

The Church of St. Blaise in Vodnjan, Croatia looks like many other churches in Europe from the outside. Inside though, there is a secret area behind the altar. There are curtains on either side of the altar that hide a secret room behind. That room contains bodies and body parts of saints. The parish priest greets guests when they enter the locked entrance vestibule. After gaining entrance to the main body of the church, guests are guided to the secret area. Here there are benches on which you are directed to sit and reflect on the saints’ lives while listening to a recording which explains the mystery of these and others of the 370 relics contained within the church.

Yes, that wardrobe should definitely have fur coats hanging in it!

Pre-1800s bigger buildings in England & Ireland (especially) are often found with “Priests Holes” which illicit religious men would use for access to tunnels to the outside & escape when pursued. What is now known as the “Mercure Banbury Whately Hall” hotel in Banbury, England has one, – with photos on the internet. Quite by accident, I was placed in that 3-star room & discovered the secret door by tracing a cold draught.