Oh right , I see , well there were a lot of other things too that might interest you , heres some more pics

This is a dessicated human heart that was placed in a lead box for some spell in Medieval England , a 14th century spin on Nirvana’s “heart shaped box” 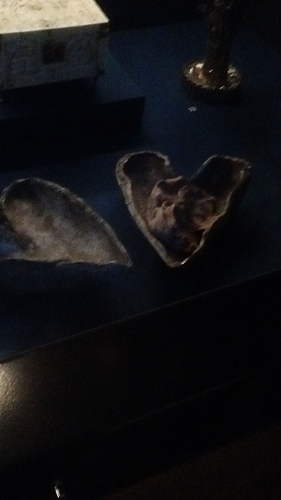 Here is a mumified cat and rat which were bricked in alive behind a wall to ward off evil spirits (Not advocating or celebrating cruelty to animals , but this is what was done in ages past) 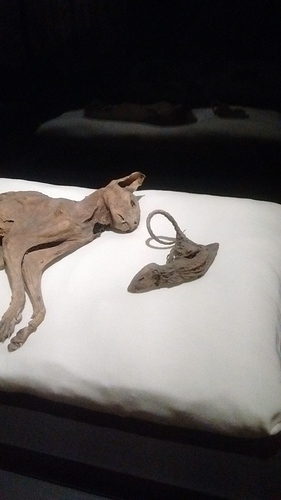 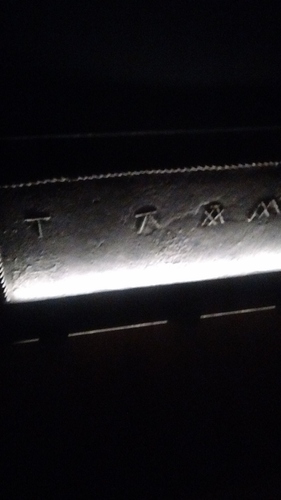 All of these objects were basically found in the wall spaces , chimneys and under the floor boards of old houses being renovated , must have been quite a nasty shock for the builders

Yes , but I urgently need to know exactly what species it was , its phylogenetic and evolutionary history , and its scientific name too. Oh and please obtain some camera trap footage as it would be the icing on the cake … We’ve got to prove the null hypothesis…

, I’m sure it was a weasel as you say and there is nothing more that needs to be said about the issue … Other than an observation that weasels are bloody cute

Did you try tracking down the woman’s family via genealogy and history sites?

I wouldn’t personally want to come across the cat or the heart. That does make an amazing story though.

That’s extremely terrifying to find, hope they had some sage handy lol.

I haven’t come across this myself, but I have heard a lot of stories about people tearing down their houses to find the bathroom walls full of razor blades. Apparently it used to be common to have a slit for razor blade disposal inside medicine cabinets back in the day, and the blades would just start to accumulate inside the wall!

My father actually found some of these , but not inside a bathroom wall. The ones he found were under some floorboards and were from the 1910’s to early 20’s. They were unrusted and unused.

I’m a safety razor shaver myself and use a metal one and disposable razor blades , although its crossed my mind to test the ones that were found out of curiosity, I would never do it , I’d be too worried about getting scepticemia or something nasty like that.

Yeah I would definitely steer clear of touching mysterious old razor blades! I wonder what they were doing under the floor boards rather than in a wall…

My apartment building is a century old so I’m curious whether it’s got razor blades or anything else strange hidden in the walls. I also found out recently that there used to be another room in my apartment that was later walled up – I’m dying to know if whoever walled it up hid anything in there. If it were me I would totally leave something as a sort of time capsule for whoever does construction next.

My guess is that’s your answer right there. It was probably done for privacy, though I’d rather have the light in the bathroom! (It used to be common to have windows in closets for light and ventilation, in the days before washing machines and dry cleaners.)

My Moving Story:
Dad had been instrumental in saving the Palace of Fine Arts in San Francisco, so when we moved to New York, Mom and Dad decided it would be fun to restore an old house.
One sounded really intriguing: John Philip Sousa’s country house on Long Island’s North Shore. The price was steep – the house sits on a bluff, with all of Manhattan and its bridges spread out across Long Island Sound. We knew we couldn’t afford it, but the agent said she’d show us the house anyway; Sousa’s daughter wouldn’t mind.
It is wonderful, huge, perhaps 7000 sq. ft. and four stories tall. The living room is perhaps 45 feet long, the dining room about 35 feet. It was just as Sousa and his wife had left it on their deaths. Stuffed with their possessions, it should have become a museum. We were the first people in ten years who didn’t want to knock it down for a McMansion – that was happening even in 1965! Mrs. Abert, Sousa’s daughter, wanted the house saved.
She asked us through our Agent to put in an offer. Her agent said our offer was insulting, but it was every penny we had, and she accepted it.
The first winter we lived there, the oil line to the boilers, each the size of a compact car, froze during a blizzard, and all 7000 sq. ft. of house froze. The weather stripping on the doors and windows had rotted, and snow drifts built up in all the rooms facing the Sound. It looked like ‘Dr. Zhivago.’ We had to shovel it out.
Bored and very cold, we explored every inch of the house, even the attics – there are three of them. In a dark corner of the steel-doored vault, we found all of Sousa’s ceremonial batons! Sousa and his band had traveled the world after he retired from leading the Marine Corps band. One was from the emperor of Japan, inlaid with precious woods, one was from President Roosevelt, another from Buffalo Bill. There were perhaps 8 of them. They were beautiful. Dad said we couldn’t keep them, so he placed them on permanent loan to the Marine Corps museum. But while we had them, I could look at them and imagine Sousa and his music traveling the world.

Hmm, I guess I’ll have to come up with some other explanation! It is, indeed, curious.

We moved into a house in the NW corner of Connecticut, bought from the family of the woman who died there. It was about 120 years old when we moved in in the 1970s.

I set out to do some work on the living room, and found some things of interest. First, there were some wall studs that had been made up out of short boards nailed together. But of more interest was a 1913 penny, carefully placed under a window inside the wall, covered in a plaster dust film, obviously undisturbed for 60 years. I pulled it out, cleaned it up a bit, and went off to the local hardware store to ask about it.

“Oh, yes, guys would do that, sort of for good luck, maybe to leave a bit of themselves”, I was told by the oldest guy in the store. I went home, got a penny from this year, put them both in one of my business envelopes, and sealed it up in the new wall in the same location.

So far, I’ve had pretty good luck in my life.

This is an amazing story. Thank you for sharing!

Incredible! Let me add my own thanks for sharing!

I used to dream of a similar scenario with John Cheever’s old house in Ossining, New York. 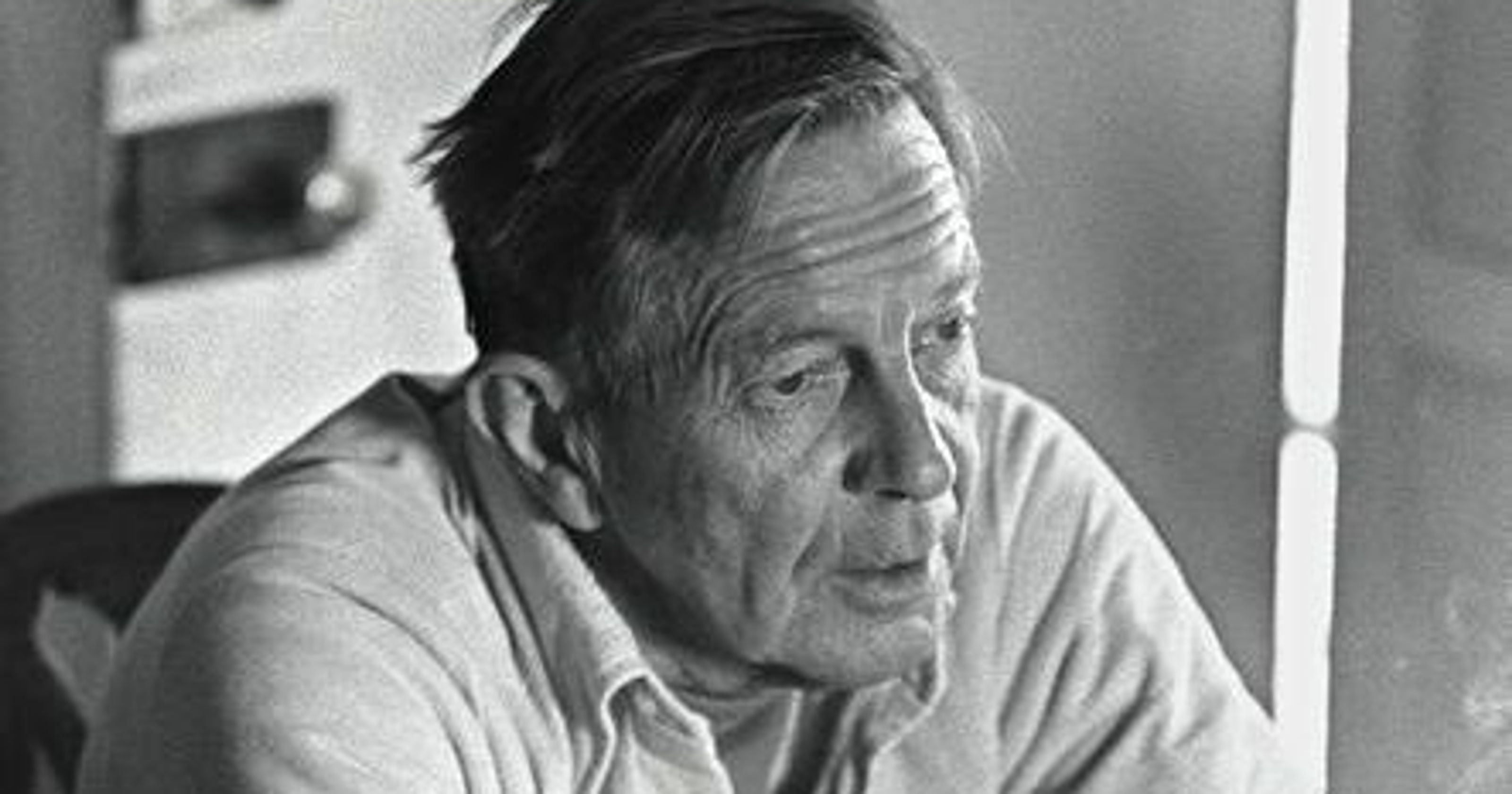 Afterwhiles, the Pulitzer-winner's Ossining home, is for sale, for a relative pittance by Westchester standards.

I love that you added your own penny and sealed it back up! I look forward to seeing this topic revisited on these same forums in another 60 years or so.

I live in a house constructed in 1955, and the medicine cabinet in both bathrooms contains this slit for razor disposal. Something to keep in mind when I finally get around to renovations.