Shit on a Shingle

Welcome to the Atlas Obscura Community discussion of Shit on a Shingle. Ask questions or share tips, experiences, pictures, or general comments with the community. For the story behind this food, check out the Atlas Obscura entry: 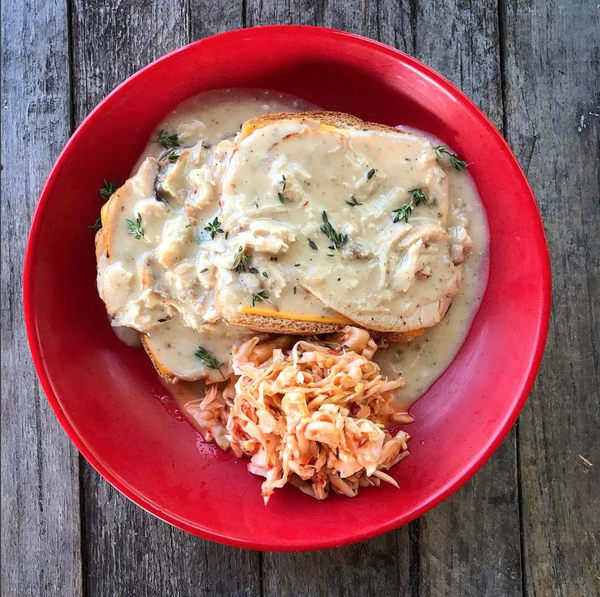 Shit on a Shingle

This is what happens when soldiers pick a new name for meat on bread.

Sooo, my mom LOVED this dish. I never knew it by any name other than Shit on a Shingle. Totally spooked me the first time mom yelled out, Hey DJ, dinners gonna be shit on a shingle. Say what? Mom always soaked the dried beef to cut the saltiness

That picture is not SoS, it’s creamed chicken. SoS these days in the Army is made with ground beef, not the old fashioned chipped beef. It’s fabulous on toast, with a fried egg on top. I make it with LOTS of freshly ground pepper, some garlic, sometimes even fancy it up with some mushrooms. I had it frequently when I was serving in the Army.

Hi there! It sounds like your toppings definitely enhance the SoS experience! We included that photo of the creamed chicken version because the Navy Historical Foundation mentioned that some modern variations now include other meats (CHOW: Creamed Sliced Beef on Toast (S.O.S.) | Naval Historical Foundation). But we made sure to include photos of other varieties in the piece as well.

This was one of my Poppy’s favorite breakfast dishes. I think my poopy just liked to use profanity colloquially, but it is tastey meal. If you see it on a menu definitely give it a try!

Creamed chip beef on biscuits was our Sunday breakfast every week of my childhood! That was in the 40’s and 50’s, and after I married, I THEN learned from my husband what it was called in the Army. I still make it sometimes and we really like it, and it sure brings back memories, special also because that was the only meal where we kids could taste coffee with a lot of milk in it!

This was a staple in the Owen household, using the thinly-sliced dried beef from a jar and homemade white sauce. It usually also included chopped hard-boiled egg, which was my favorite variation. When I went into the Air Force in 1959, I was a little disappointed to find that the “official” recipe now used ground beef instead of dried, but found I liked it just as well. That version starts with several pounds of hamburger thrown into a giant steam kettle, seasoned and cooked until close to done, and then a few gallons of evaporated milk added and all boiled down until thickened. I very much enjoyed trying combinations of toast, potatoes, eggs and sausage in the mix … I also often found myself dining alone!

I still keep a jar or two of dried beef in my cupboard for when the urge strikes.

We also refer to creamed tuna on toast as SOS. It was a staple for a quick Catholic Friday meal, and I didn’t think my kids were too fond of it. Then my son asked for the recipe. There’s a recipe? I just make 2 cups of white sauce and throw a can of tuna. That probably works for any other meats, too.

My father was in WWII so I am very familiar with it. He would call it Sh.t on a Shingle. We lived in Laurel, MD at the time. We ate it mostly for breakfast but for supper too. Daddy liked his chipped beef; two eggs & coffee. Ate mine with one egg. When we came to SC in the late 60’s we didn’t eat it as much cause it wasn’t as popular. Going to start eating it again.

Cream Chipped Beef on Toast used to be one our (my sister & me) fav meals when we were kids. I also remember Hamburger Gravy from grade school (late 50’s, early 60’s), it was served on mashed potatoes. i eat much fancier food (& healthier) now as an adult but I still have a soft spot for any thing made with a creamy sauce.

While the first recipe for S.O.S. as we know it with chipped/ground beef may not have appeared till the 20th century, the concept of a sauce with meat on toast (known as “sops” because the bread sops up the sauce) is old, at least 500, if not 600 years old, and originated as a dish for the sick. Famous Italian chef Bartolomeo Scappi’s 1570 cookbook has a number of recipes for chicken, veal, beef, pork, field mushroom and truffle sops in a meat broth made into a sauce poured over toast. The book also includes also some delicious sops made with cherries, pears, plums and dates. I interpreted a cherry sops recipe here.

My dad (WWII) used to make it for us every Xmas. He’s been gone for 21 yrs but we still gather every Christmas at Mom’s and have it for brunch. It’s not easy to find the dried beef any more.

I have been eating it for 70+ years, but always with a gourmet touch - a healthy douse of worcester(shire) sauce.

I’ve also heard a variant called ‘crap on a cracker’ (or maybe that’s just the slightly censored name for it). My broke college kid version from undergrad was usually sauteed beef jerky with eggs. Sometimes on toast sometimes on crackers.

Wait, it’s NOT on the IHOP or Crackerbarrel menus anymore?!?!
When did that happen?

I grew up eating creamed chipped beef on toast. Mom always served it with peas. Yum, I still love it but my family won’t touch it.

I grew up in the PNW & we ate this on a regular basis, my sister’s mother sometimes used tuna instead of the chipped beef. They both were inexpensive & filling.

British Naval Mariner Cyril Tawny wrote a song that remains popular among the sea shanty community today. It is called Chicken on a Raft and it is pretty catchy!

Loved it growing up but my Mom didn’t call it SOS it was chipped beef on toast we also ate a lot of Sausage gravy and fried bologna gravy with toast or biscuits. I couldn’t believe how much dried beef costs these days, so rarely have it anymore. I remember we use to get boiling bags of creamed chipped beef along with salisbury steak, chicken ala king bbq beef to keep in the freezer for a fast meat in the 70’s

Recipe cards - it's about the math! - STIR THE POTS I made this in the army…made me laugh when someone posted this link…