Carousels are one of those rare attractions that can make anyone feel like a kid again. However, carousels are much more than just nostalgic carnival relics. Most are grand mechanical antiques, exhibiting a level of craftsmanship rarely seen in the modern age of sleek amusement rides.

In San Diego, California, tucked away in the Seaport Village is one of the last remaining carousels built by Charles I. D. Looff, the man who brought the carousel to America. Not only are carousels a journey on history, but also through it. At the Dodo Manège located in Paris, visitors can ride on the shell of an extinct horned turtle or a few other animals that have vanished or are endangered. Before riding the carousel, visitors can view a small plaque outside the attraction detailing the various animals’ ecology. These are just a few examples of the amazing works of art and preserved history that carousels represent, but now we want to see some of the most amazing and iconic carousels that you’ve ever seen or ridden. 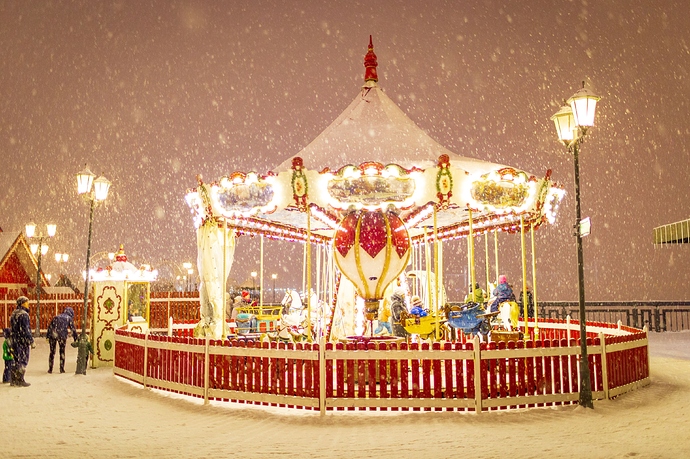 In the thread below, tell us about your favorite carousel, where is it located, and what about its design makes it special? Is there any interesting history behind the carousel? Did you get to ride it? Be sure to include any pictures you might have as well. Your response may be included in an upcoming round-up article on Atlas Obscura!

The Seaglass Carousel in NYC at Battery Park is spectacular!

I live in San Diego, and have ridden the carousel in Balboa Park for 65 years. It is one of the few that still lets you try to catch the brass ring to get another free ride. The 1910 carousel, adjacent to the San Diego Zoo, is a menagerie of animals and all but two pairs are original with hand-carved European craftsmanship. Originally built in NYC, and sent to Los Angeles, it was moved to Coronado in 1915, and then to Balboa Park in 1922. It is also one of the fastest carousels in the USA, clocking in at 13.5 MPH at top speed during the ride!
https://friendsofbalboapark.org/balboa-park-carousel/ 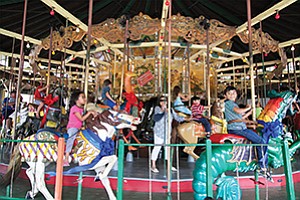 The one at Seaport Village, built in 1895, is also great, but it has only been in that location since 2004.

Lighthouse Point, New Haven, Connecticut. A lovely folk art carousel, built in 1916 and painstakingly restored in the 1980’s. On the National Register of Historic Places. We lived in New Haven for many years and brought our kids, and then grandkids, to it regularly, but now we are too far away for me to add a photo.

From the website:
“It was assembled in 1916 by the Murphy Brothers in their Savin Rock workshop.
The carved animals were the work of the Murphy Brothers, Charles I.D. Looff and Charles Carmel. Few carousels are bigger. It boasts 72 figures mounted on 20 ranks on a 60-foot platform. There are animals aplenty. Jumping horses are set four abreast alternate with horses standing three abreast. Two exotic dragon chariots charge from opposite sides of the platform. Nearby strides a camel. Paintings of the New Haven Harbor – steamboats, sailing ships, barges, lighthouses and mermaids add to the attraction.”

There is a wonderful restored carousel in Geelong, Vic, Australia! I have never ridden it but have seen it a few times.
‘The Armitage-Herschell portable steam driven, hand-carved wooden carousel was constructed circa 1892 and is one of only 200 in operation around the world.
Featuring 36 Dare horses and 2 chariots, it was purchased by the Steampacket Place Development Board in 1996 and painstakingly restored’

the historic carousel in coney island; one of the oldest and originally it was a Surf ave. it was sent to Vicenza Italy for restoration and came back bright and shiny and no longer the carousel i knew as a child. - it now lives in a cage on the boardwalk.

There is a Red Grooms carousel, I think it’s still tucked away in storage. I’ve seen it when it was setup at the park on the Cumberland River. Funny news footage about the little boy who got the first ticket to ride YouTube

In de “efteling” an amusement park in the Netherlands is an old indoor steam carousel, it was build in 1895 and later on bought by the park. Its placed in a big hall and is surrounded by a bar decorated in carnival style. 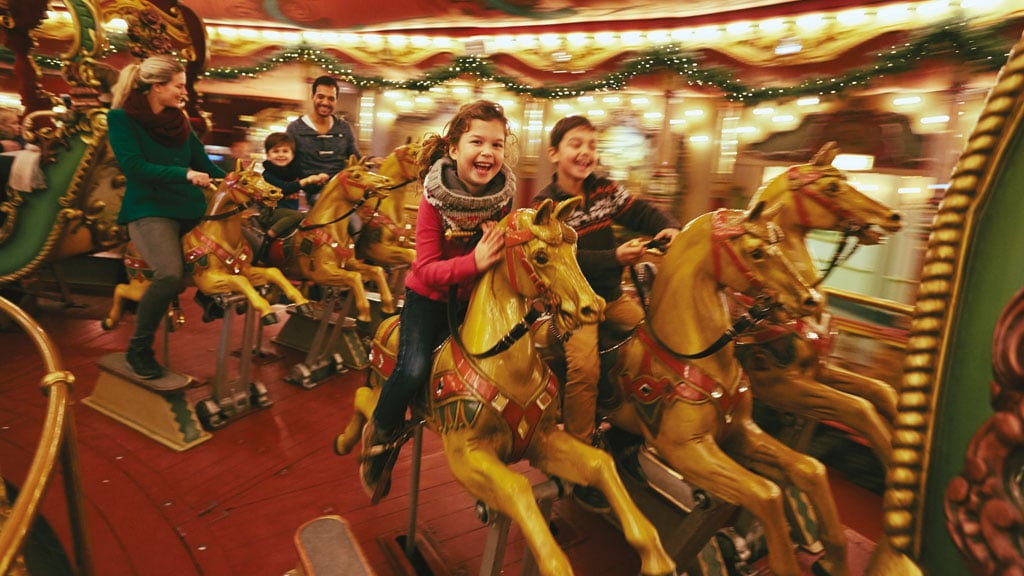 Carcassone, France. A two-story, beautiful one! 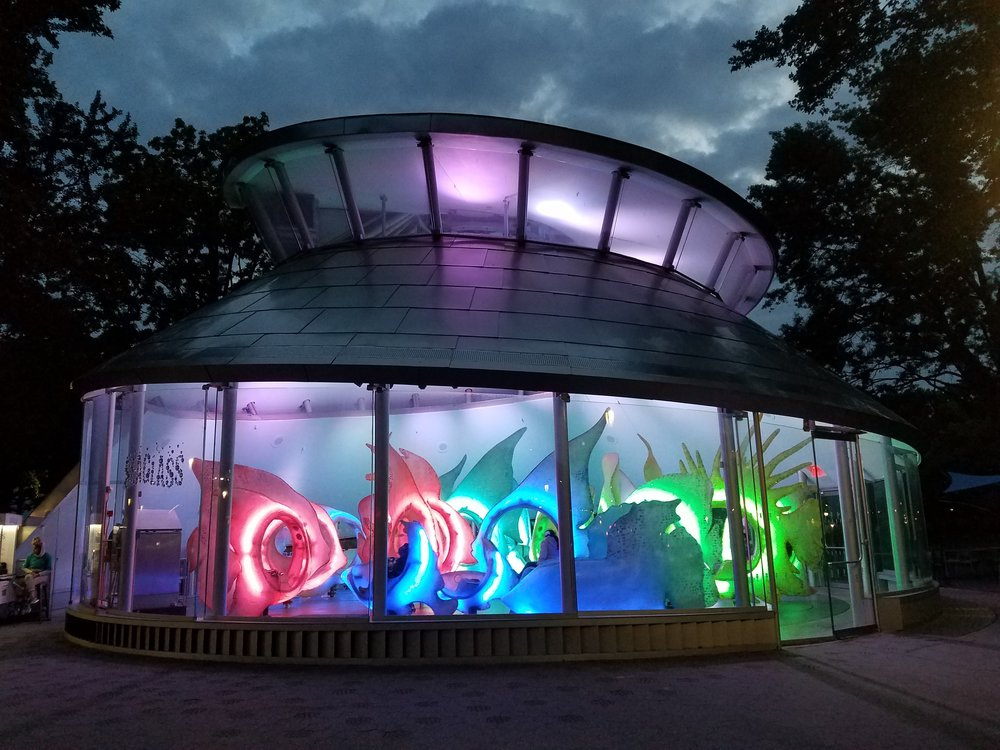 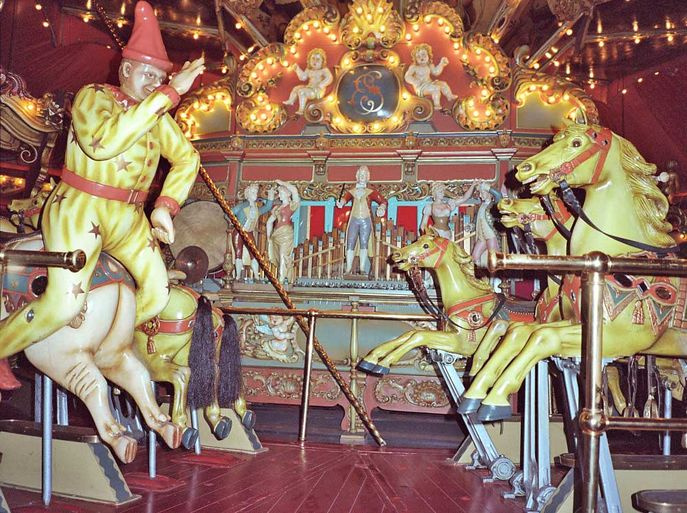 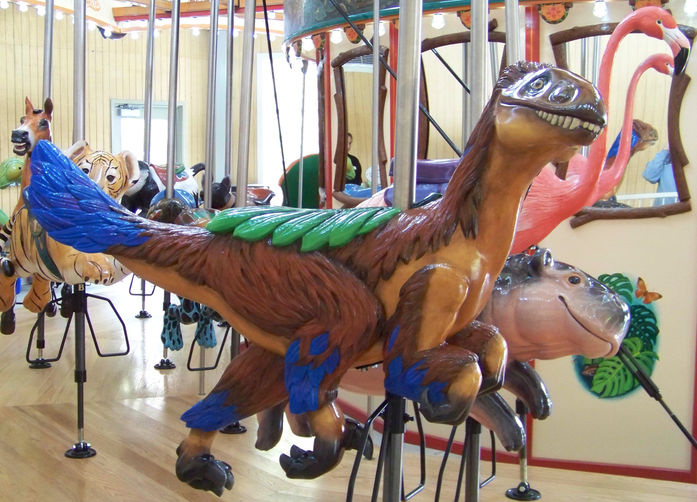 Steampunk carousel from Les Machines De L’Isle, from L’Isle Nantes, France. They may have multiple carousels: 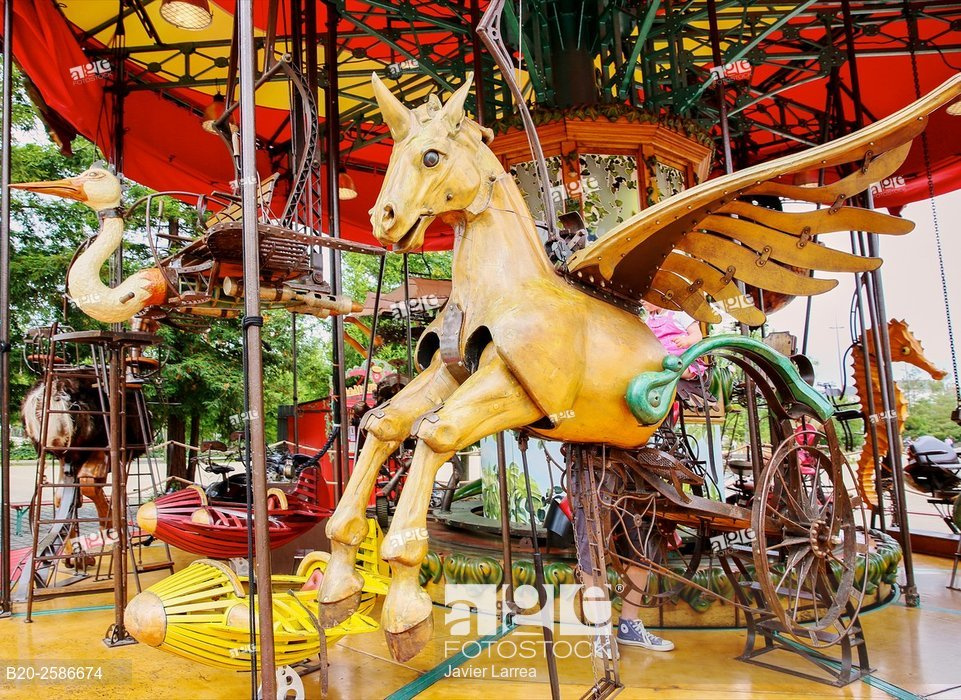 The Riverview Carousel at Six Flags Over Georgia is gorgeous!
It was built in 1908 and was originally in the Riverview Park in Chicago.
According to it’s signage, it’s one of the few remaining five abreast carousels.

The four inner rings of horses “leap” while the outer ring is stationary. There are also a couple of chariots. 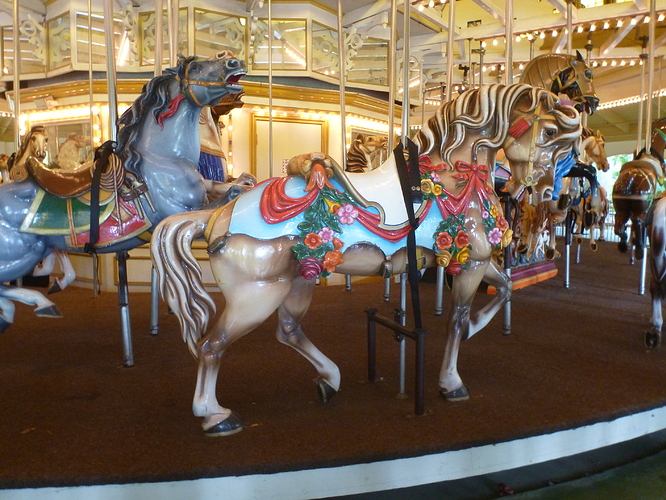 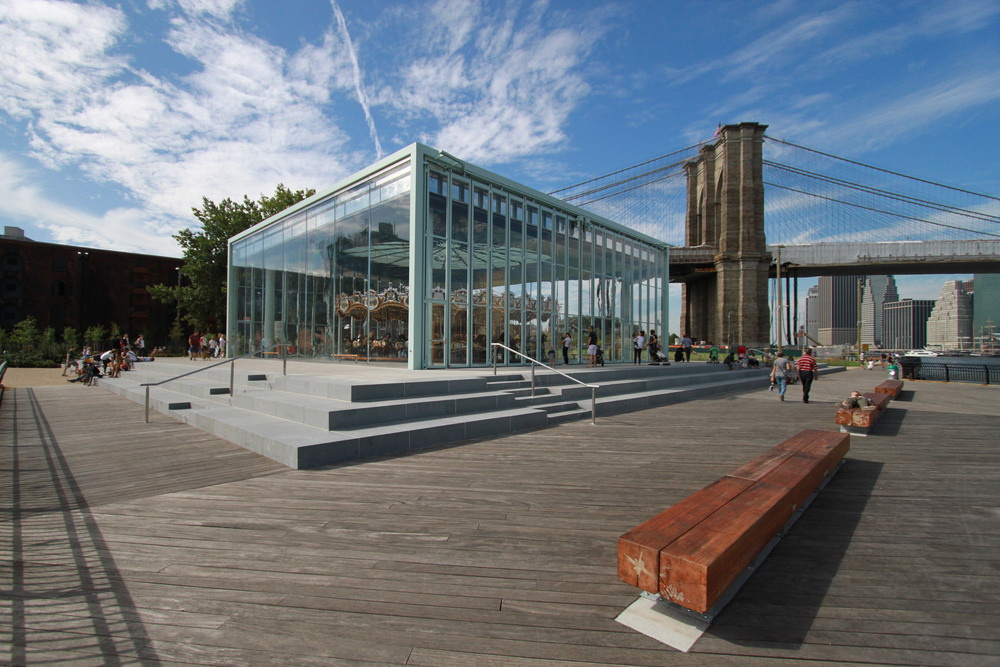 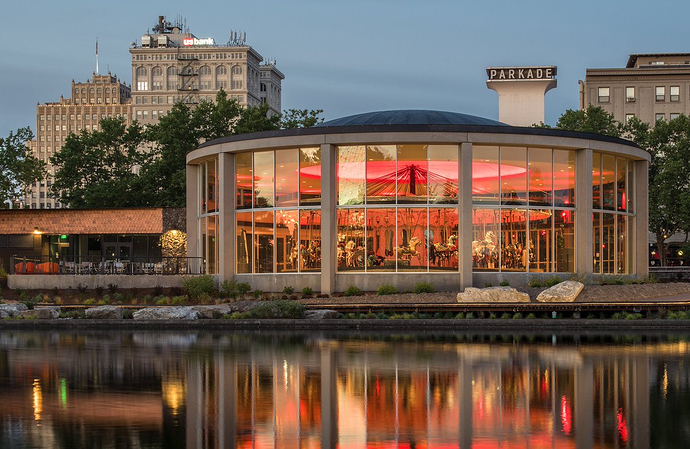 Portland’s Jantzen Beach Carousel is undergoing restoration while it searches for a new home. 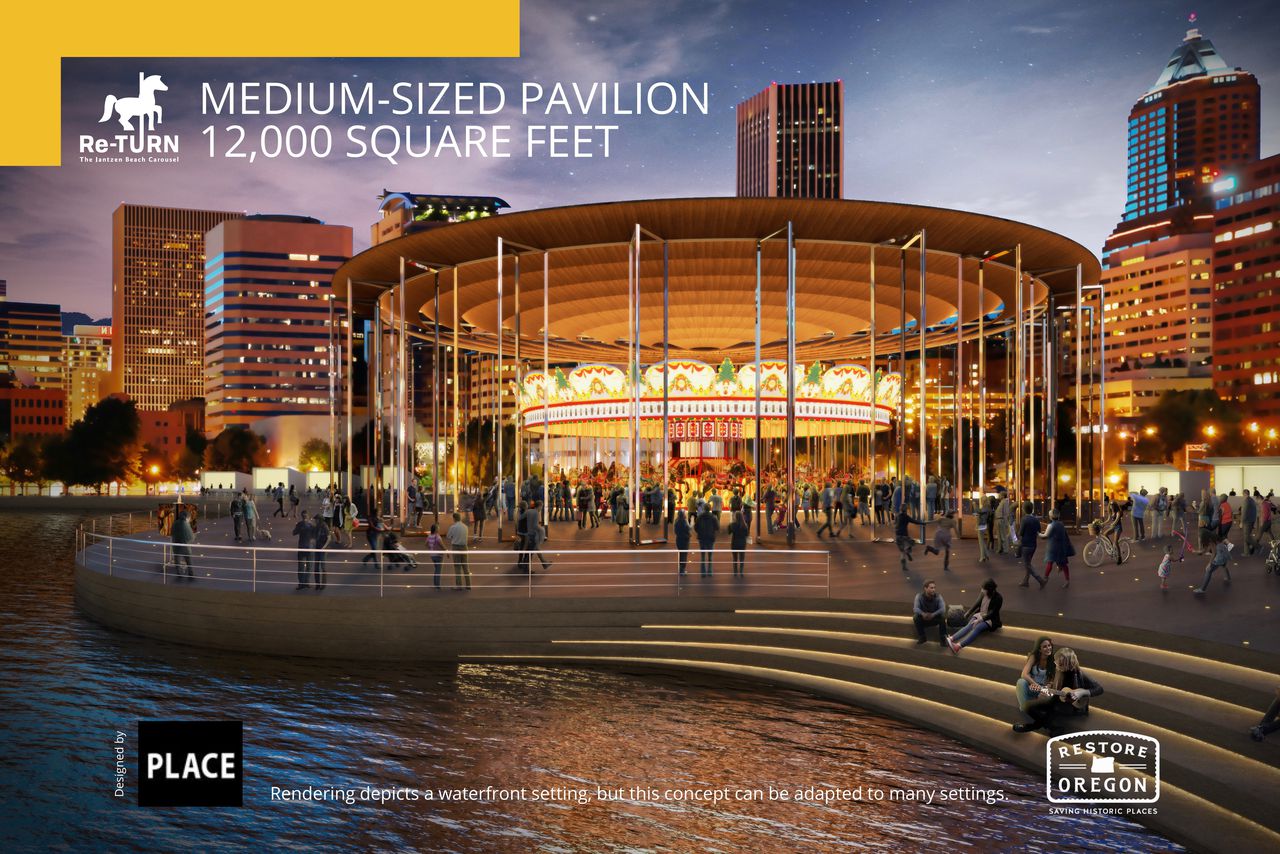 Restore Oregon unveiled three "design concepts" Monday for ways to bring the Jantzen Beach carousel back to the Portland area. 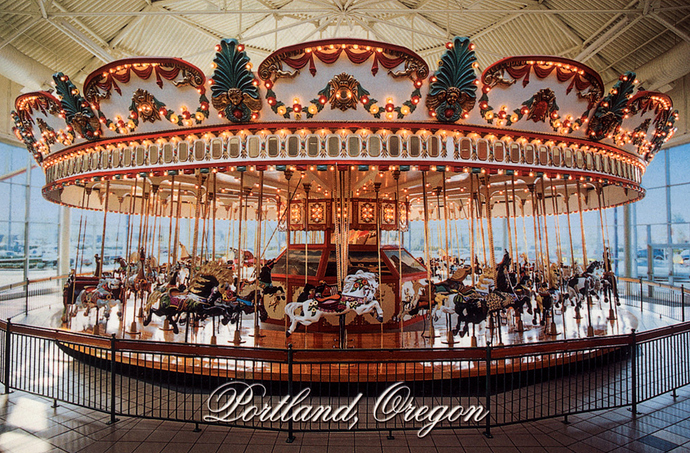 Wow I had no clue there was an organization. Thanks for sharing and the info

There is a wonderful carousel in Albany, Oregon, a small town off the 1-5 corridor, between Corvallis and Salem. Building the carousel has been a real community-driven project, and all the animals and decorations are hand carved and hand painted. It runs on a restored 1909 mechanism. Very neat

There is a wonderful museum dedicated to the history of carousels. The New England Carousel Museum in Bristol CT. they have amazing pieces.

These are lovely! Thank you for sharing!

Many happy memories. I can remember riding the Efteling carrousel with my granddad som 60 years ago, with my sons, an with my grandson.