Show Us the World's Most Incredible Historic Ruins!

Some of the more fascinating artifacts of human history are the architectural accomplishments of our early civilizations. Just think, without the use of modern tools, the Inca of 15th-century Peru scaled the Andes to construct Machu Picchu, more than 7,000 feet above sea level. A feat of engineering that has remained an awe-inspiring monument for hundreds of years. Perhaps one of my favorite ancient structures is the Parthenon in Athens, with its limestone foundation and marble pillars, it’s truly a gorgeous, breathtaking accomplishment. I know I wish I could’ve also seen the Colossus of Rhodes in its glorious heyday. 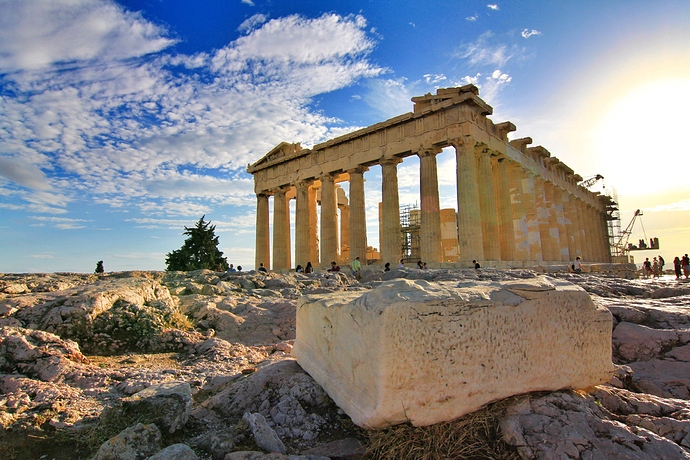 Now we want to hear about some of your favorite ancient structures or incredible ruins that you’ve encountered. Where were they? Who built them? What was it like to experience surviving history, firsthand? Be sure to include any pictures you might have as well! Your response may be included in an upcoming round-up article on Atlas Obscura. As always, we are all ears.

I love historical ruins , grew up visiting them in the UK , Ireland , Scotland , Wales and France during my childhood then spent a lot of my late teens and twenties exploring archeological sites in Mexico (sometimes every other weekend I was visiting a new site).

Personally of all of them , its the Mexican Prehispanic ruins which interest me most but although the Mayan sites in the country and in Guatemala are the most impressive visually and I love visiting them for some reason its the Central Mexican sites that interest me most.

Xochicalco - Just a really beautiful site in very beautiful (but arid) scenery and probably one of my favourites of all the sites I’ve visited, have visited several times. I really love the Mayan style stelae with the plumed serpent and the seated lord / warrior.

Cacaxtla - The murals are simultaneously beautiful in their vibrant colours but horrific in the violence portrayed (slit throats , disembowelment , bludgeoning of heads etc.). Plus they are a total enigma , no one really knows who the mysterious civilization who constructed the temple buildings and created the paintings were and to top it all , they are one of the least visited historical ruins in Mexico and really deserve to be seen by more people.

Teotihuacan - This is really one of the most fascinating places of all the MesoAmerican sites. Everything here is superlative. Two gigantic pyramids dedicated to the sun and the moon tower up into the sky and countless smaller ones are dotted around everywhere. There are the painted murals that either depict enigmatic and mysterious gods or ferocious creatures like jaguars , rattlesnakes, wolves , coyote and eagles or beautiful ones such as the resplendant quetzal bird or the swallowtail butterfly.

El Templo Mayor - The ruins of the great temple of Tenochtitlan in the Zocalo , the religious and political centre of the Aztec empire, these ruins are imbued with a really poignant and sinister and bloodthirsty energy / aura that is palpable , just totally saturated in history. Walking around here you are confronted with the stone carved imagery of skulls and giant ferocious serpent gods.Thousands of people were sacrificed here walking up the hundreds of steps of the pyramid that would have rose up into the sky to have their still beating hearts torn out of their chest by a high priest wielding an obsidian bladed knife as an offering to the serpent gods who were believed to be nourished by blood. Then the conquistadors arrived and engaged in their own wanton genocidal butchery of civilians too to satisfy their own psychopathic bloodlust and brutal tyranical god who also demanded submission and slaughter.

Tula - This is another site that a lot of people tend to miss out on , I suppose because it’s a bit out of the way , but if you get the chance then you should definitely visit as you wont regret it. You walk across sunbaked scrubland dotted in cacti and agave to a pyramide platform topped by the gigantic stone effigies of fearsome warriors and whose base is covered in imagery of beasts like jaguars , puma, wolves , coyotes and eagles devouring human hearts. This was the religious and political centre of the Toltec empire , the forerunners of the Aztecs , it is really a sight to see. 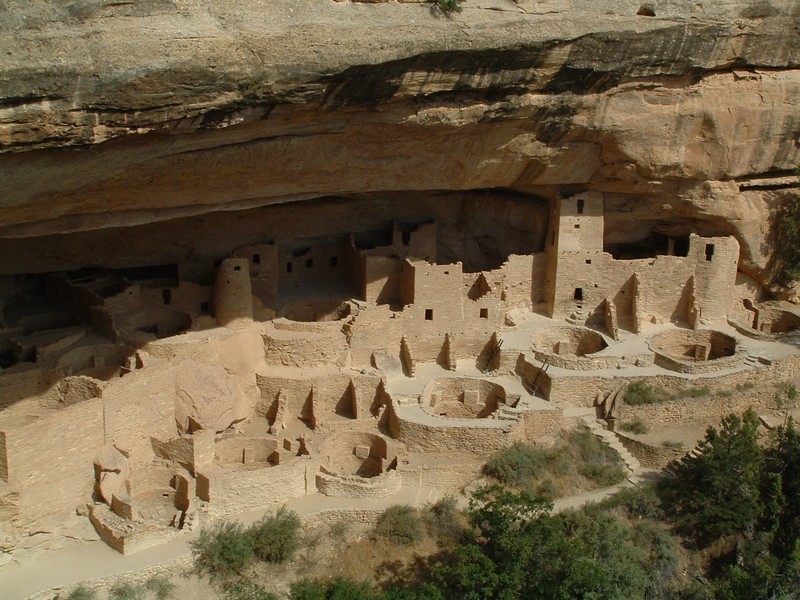 Continuing with @Monsieur_Mictlan’s post, I also quite love the ruins of Mexico although, while I love the Precolumbian sites, my preference goes to Colonial ruins, specially those of haciendas and religious buildings. While the cultures that built the pyramids are not extinct, they do exist in a very different form to what they did back then. Modern Mexicans aren’t really building new ballgame courts or tzompantlis nowadays, but they are building churches, mansions and factories in a manner closer to what the Spanish did after their arrival. As such, with Colonial ruins being more recognizable to the modern eye, they help me imagine what a post-human world might look like and I just find that fascinating.

Considering my love for the state of Oaxaca, it makes perfect sense that my favorite Christian ruins are those of Cuilapan/Cuilápam de Guerrero’s unfinished Dominican Convent. 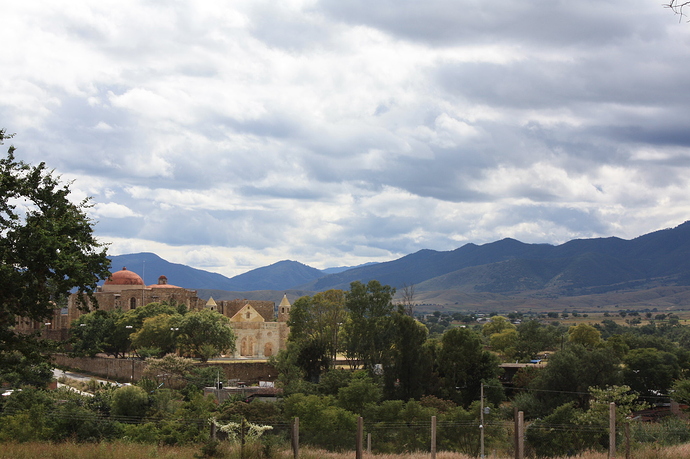 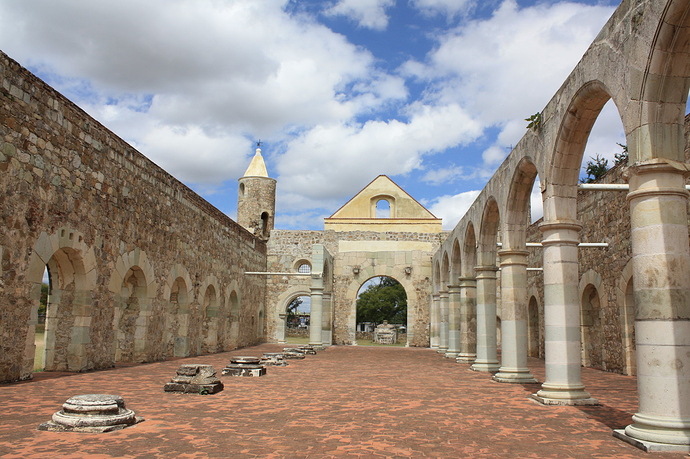 In my visit to Zacatecas, I was big on the Rafael Coronel Museum, just a brilliant mixed use of the most derelict ruins as part of some amazing gardens, with the more complete halls remodeled to house the mask collection.

Currently living in Scotland, I am starting to get into post-industrial ruins. Even closer to the modern day than Mexico’s Colonial era (although Mexico has a few post-industrial sites too, probably the best known being Fundidora, the former steel foundry in Monterrey), the ruins left behind by the Industrial Revolution are extra post-apocalyptic. My favorite example so far has been Prestongrange Industrial Heritage Museum with ruins that encompass the production of a whole range of goods, from glass to bricks.

Somehow, I just knew you’d have an incredible response for this one.

, I had to mention the prehispanics , its quite an obsession of mine haha

@tralfamadore Beautiful ruins ! If I remember correctly there is some evidence that the culture that built it engaged in cannibalism during environmental stressors that are believed to be somehow related to climate change.

Very disturbing to contemplate given the projections of climate change in the near future , I have absolutely no doubt that in parts of the world many communities will be faced with similar situations as those that faced the Meso Verdians.

There is a really interesting site that really resembles Mesa Verde called Paquime in Chihuahua, Mexico. Unfortunately I never got round to it visiting it when I was there , way too dangerous with the cartel violence.

@linkogecko I totally agree about the colonial ruins of Mexico , they are fascinating historical sites in their own right. Due to my familiarity with and family connection with the whole Hispano / Criollo culture I am a little conflicted about it and dont find it as interesting. But that is probably because it isn’t so mindblowingly alien and strange to me as the Prehispanic worldview.

Have you visited the old Spanish monasteries and ruins in Querétaro state and especially the Sierra Gorda ? If you haven’t I realy reccomend checking it out when you next visit Mexico as there are literally hundreds of early colonial era historical sites , many of them in remarkably beautiful natural surroundings.

I did visit 4 of the 5 Franciscan monasteries included in the Sierra Gorda UNESCO Heritage Site, only missed Tancoyol. Loved the architecture of the facades and the Biosphere Reserve that surrounds them, with its eclectic mix of forest, jungle and desert plants, but if I worked in UNESCO I would’ve given the title to the Dominican sites in Oaxaca first. The Querétaro ones are beautiful, but in Oaxaca things get IMPOSING. The Dominicans liked going big.

Didn’t bring up the Franciscan sites here either, as to me they seemed quite well-kept and not really in ruins. I definitely wish to return to the Sierra Gorda and Huasteca Potosina with more of an emphasis on the natural landscapes, though.

The one imposing convent ruin that I haven’t been to but is high on my list is Tecali de Herrera, Puebla. Seems like a taller, greyer Cuilapan. 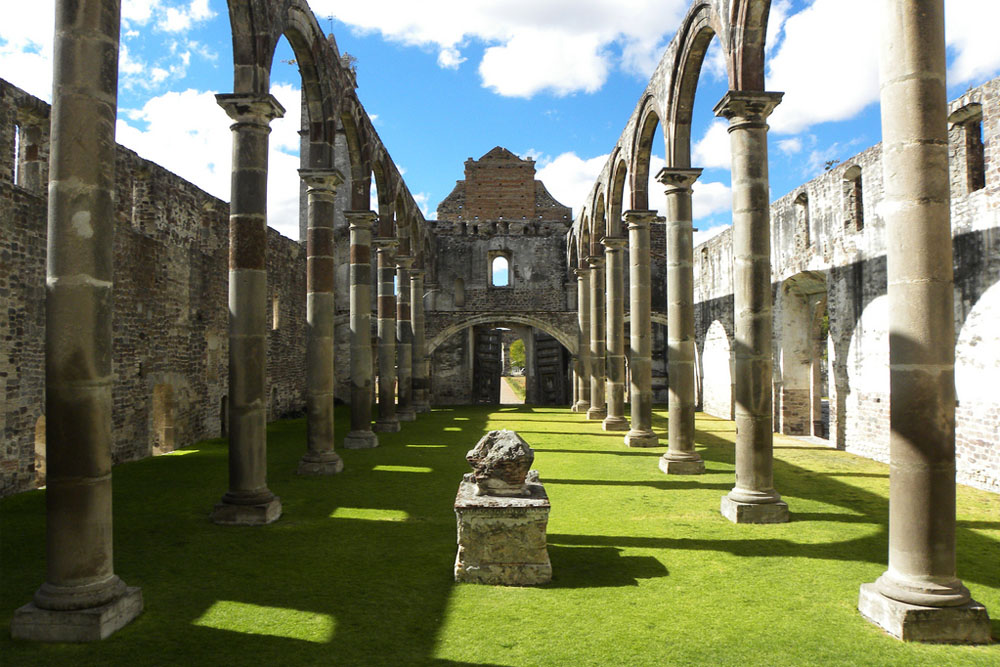 This is just amazing insight, truly truly appreciate the depth of this response!!!

I remember the first story I was working on for Atlas was about the discovery of the first temple related to Xipe Tótec, “Our Lord the Flayed One” who wore the flayed skins of humans. Super important deity so the discovery of this temple was fascinating because none had been found. Such an interesting history.

Agreed!! I was thinking about posting about Montezuma Castle in Arizona. There is truly so much undiscovered history across the Americas.

Xipe Totec was a pretty hardcore god , and a really disturbingly fascinating one , Kind of like a Meso-American Buffalo bill of sorts

Have you read about the tale of the daughter of Culhualcan ? it is absolutely horrifying and is kind of inseparable for me from Xipe …

I have not!! If you have a link to some source material feel free to drop it. I LOVE researching this stuff.

Ive seen quite a few ruins around the world. I’m in always in awe of rock-cut structures - Petra in Jordan, the churches of Lalibela in Ethiopia, and Geghard Monastery in Armenia. But in my mind, nothing in the world can compare with the carved stone structures at Göbekli Tepe in Turkey.

We’re so used to using the Pyramids or Stonehenge as our standard for ancient, but those ruins re-write history. Göbekli Tepe has been dated to 10,000 BC, it would be almost 7,500 years later before the pyramids were built! We are closer now to the construction of the pyramids (4,500 years) than between the pyramids and Göbekli Tepe.

The large carved stones would be buried and lost near 7,000 BC (forgotten millenia before the pyramids would be constructed). The age, the scale, the state of civilization at that time (pre-farming)… It’s all absolutely mind-boggling and truly without peer anywhere else on the planet (so far!). 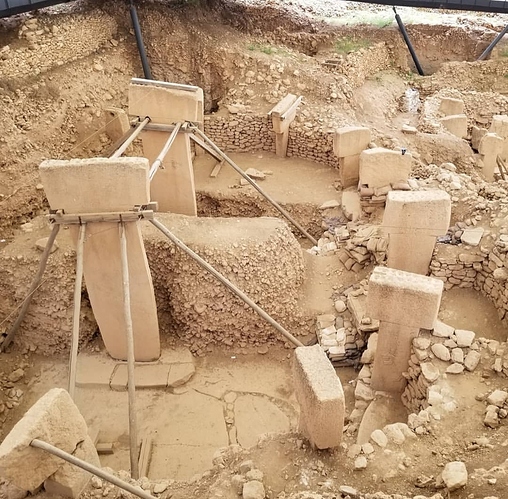 The naturally occurring fairy chimneys and man-made underground cities of Cappadocia, Turkey, are the most unique sites I have ever visited. The carving out of the underground cities and the remnants of murals left in the cave churches serve as haunting reminders of religious persecution in the cradle of civilization. 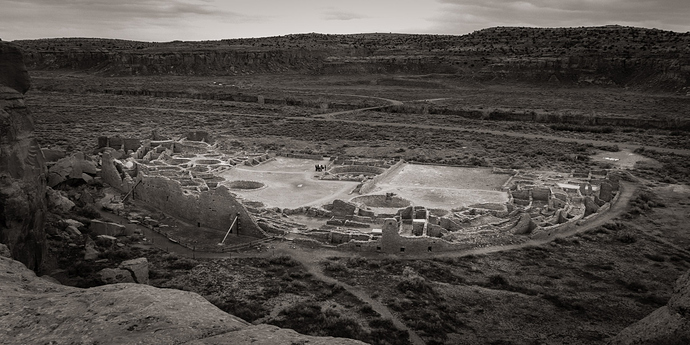 I love ruins. Every place I visit I try to find some to see. When I studied abroad in Mexico I saw a few. Teotihuacan is a great site with it’s Pyramids of the Sun and Moon. I liked the ball game I saw at Xochicalco. I’d have to say the best experience I had was at El Tepozteco in Tepoztlan. There definitely was a sense of accomplishment as the path up the mountain to reach the site can be pretty strenuous. It was worth it though.

It is truly an amazing site! I’ve read that many speculate it could be the world’s oldest temple and possibly changes how we view that period of humankind because it was thought that many people were still hunter-gatherers! Thanks a great deal for the post 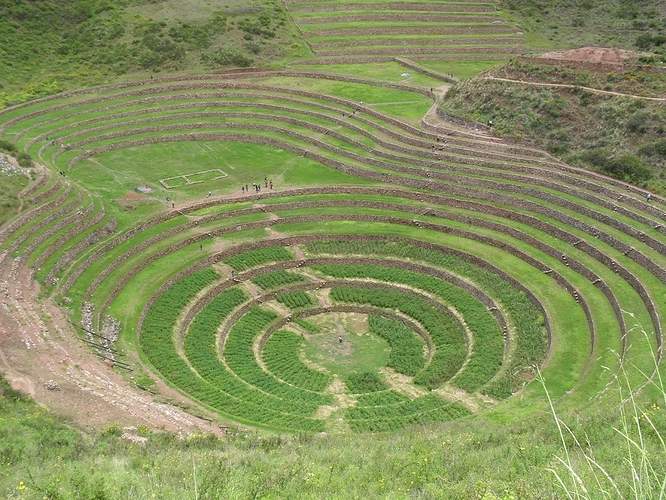 I was awe struck visiting Moray in Peru, a sunken terrace extending down over 30 metres. Much less crowded than Machu Piccu and just as impressive!

So many favorite ruins!!
1 - Holyrood Abbey ruins in Edinburgh. Part of the Holyrood castle - the official residence of the royal family in Scotland. 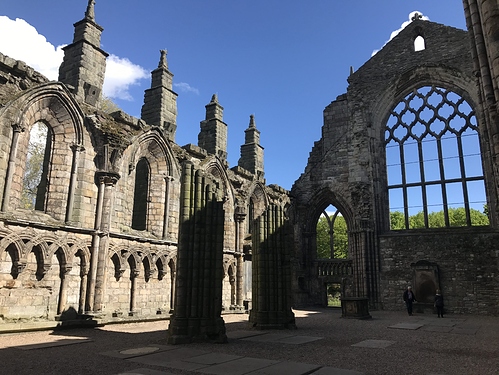 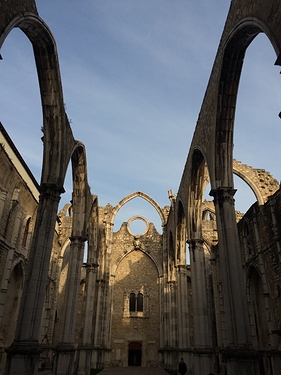 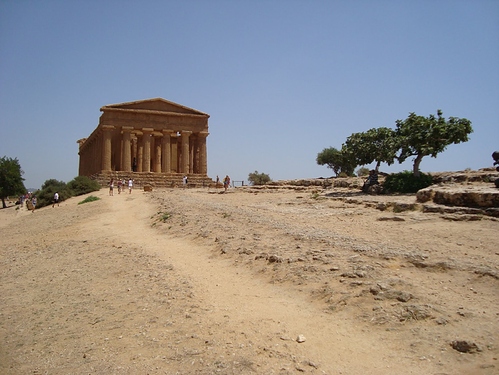 Another favourite is La Ciudad Perdida (Lost City) in Colombia. Reached only after a gruelling 5 day trek through the Colombian jungle! It’s almost 1000 years older than Machu Piccu and was built by the indigenous who lived in the Sierra Nevada de Santa Marta. It was abandoned after the Spanish conquest and only rediscovered in the 1970s. 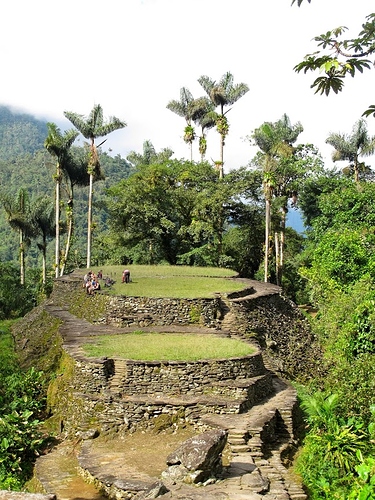