Note to all AO users. You no longer have to worry about why your entry didn’t get published.
Just fork out some dough.

Entries can be sponsored now. 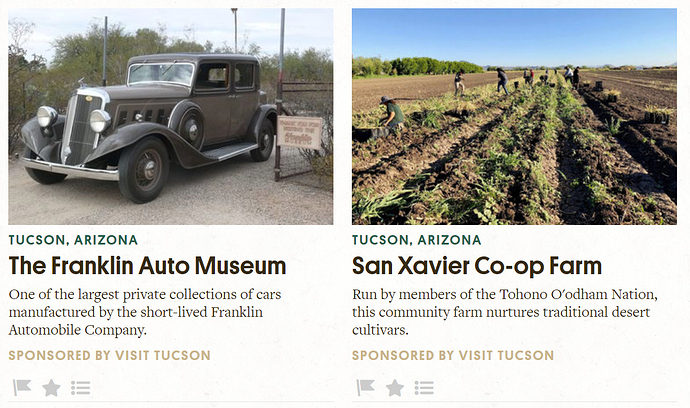 Oh my, did AO talk about this at all? It would be disappointing if this started to play a role in getting a place added or if this got them to the top somehow.

All of these seem to be normal entries apart from the sponsor text and ’ This post is promoted in partnership with Visit Tucson. Begin your journey here and discover all of the adventures that await.’ at the bottom of the entry.

I don’t really have issues with that, as long as they don’t start shunning any type of business that doesn’t pay.

Hi all, I’m happy to answer your questions about this! This isn’t actually a new feature as it happens—we’ve been making it possible for our brand partners (most often, these are tourism bureaus) to “sponsor” certain places in the Atlas for many years now (it makes complete sense that you may have never noticed it before). To clarify, what this means is that our partners are paying to have those places receive additional promotion—it does not mean that we add places to the Atlas that we would otherwise not include. Every new place listing we add to the website goes through the exact same vetting process. It’s essential that we maintain this consistency, because everything we add to the Atlas needs to meet our standards for the long-term. We can’t and don’t want to add places that we don’t think belong on the site permanently. One other point that may help: We are in the middle of redesigning our place pages, and one to-do item that’s come up is that we plan to make some improvements to the look and design of how these sponsorships are communicated, in an effort to make it clearer to readers like you what it means for a place to have a “sponsor.” We hope to roll out some of those changes in the coming months.

Thanks for the clarification, sommermathis. I find it interesting, however, that sponsor is in inverted commas, as if the meaning of the word didn’t quite fit the occasion. Maybe it doesn’t, but it all feels like a slippery slope, anyhow. To be more precise, I’m glad to hear that sponsorship does not affect the criteria for publication, but I’m not sure what it means that “the places receive additional promotion”.
I usually use AO to check if there’s something worth visiting in a particular area before I visit it. At the moment, if I’m not mistaken, places are ranked according to the number of users that would like to visit them. Will this ranking system change to accommodate places receiving additional promotion? This would definitely change the way I use AO.
As a contributor to AO, does it mean that a sponsor can be attached to a place I contributed without my consent? When I contribute a place to AO, I feel in a way that I put my trust in the hands of AO. My name is going to appear with that place. That was my decision. But I wouldn’t feel particularly pleased to know that my name could be associated with a sponsor I know nothing about.
Maybe I’m alone in feeling this way, but these are my concerns.

Hey Max, thanks for writing back, I realize now that I should have clarified what “additional promotion” means. What this usually means is that a partner might pay for special social media posts or newsletter placements (social media, newsletters and other similar channels are generally what us media types are referring to when we say “promotion”). When that happens, those promotional placements are always clearly labeled as being sponsored. It doesn’t have anything to do with, or affect, the order that places appear on a destination page (fwiw, we don’t really think of places as being ranked quite in the way you’re describing, though you’re correct that the logic of how they appear currently is tied to Been There’s and Want to Go’s. Somewhat separately, we’re actually exploring a new-and-improved logic for destination pages, because we’d like readers to see more variety than they are currently seeing—we’ve noticed over time that places that have the most Been There’s and Want to Go’s are often just a bit more well-known, instead of being the most unusual or intriguing or worthwhile).

As for your question about whether a place that you added to the Atlas could later have a sponsor/additional promotion attached to it—yes, it’s possible. If a local tourism bureau wants to pay us to highlight an existing place or places in the Atlas, say, in a series of sponsored tweets, or in a special email newsletter that we put together just for them, we are happy to oblige. Any place sponsorship of this sort only appears temporarily, for the length of the special promotion. The reason I put “sponsor” in quotes is because it is not really like sponsored content—with sponsored content, the sponsor gets to have input on the final product. That’s not the case with a place “sponsorship”—we don’t allow our partners to dictate anything about the content of our place entries. That’s why I’m interested in improving the look & design of how we acknowledge our partners during a promotional place sponsorship. When it comes to the Atlas, sponsors aren’t influencing what we add to the Atlas, nor are they influencing what we say or show our readers about those places. Their sponsorship is merely designed to allow us to bring more attention, for example via social media, to great Atlas places and their associated destinations.

I hope this all makes sense. I know what an enthusiastic community member you’ve been, and I’d hate for you to not feel good about contributing. I’m sure you want Atlas Obscura to succeed just as much as we do. If you want to talk some more, send me a private message with your phone number and I’d be happy to give you a call.

Ok, so you guys don’t add places based on money, that is good, I think that it would devolve the atlas really fast. Plus be a bit of a slap in the face for us contributors.

What made me worried about this is that a day or two before I saw this post, one of my places got declined because it was a shop and ‘shops can be challenging to include in the atlas’. This immediately made alarm bells ring in my head when I saw this.

So my question, if ‘pay to win’ is not a factor for the places, why are shops challenging? (While restaurants for instance are fine)

@sommermathis
I agree with you that I’d like to see AO succeed, but I am not sure we agree on what it means to succeed, or the terms and conditions attached to succeeding. Personally, I’d prefer a lean-and-mean, contributor-based AO. For the time, being I’ll take the back seat and observe. We’ll see.

@CoolCrab
Interesting justification, considering that restaurants (i.e. privately owned establishments) keep coming up in the entries - as you said. Another bone to pick here - but not with you, CoolCrab. If restaurants deserve being there, wouldn’t they fit better in the Gastro Oscura section?

Hey CoolCrab, thanks for asking for more details on this. The reason we find ourselves applying a high standard to shops is not related to the fact that they are commercial spaces—lots of places in the Atlas charge admission fees, or sell something directly to their visitors. It’s really just that we receive a fair number of community submissions for shops that feel, to us, quite gimmicky (essentially, we try to avoid tourist traps). It’s also the case that a lot of shop owners tend to submit their own shops themselves (more so than any other kind of business in our experience) so we usually want to feel sure that any shops that we do add are genuinely unique or really do offer our readers that sense of wonder, or an experience you can’t get anywhere else. We do sometimes add shops to the Atlas, we just try to be choosy about which ones we add.