OMG I love the Oklahoma Octopus!

For obvious reasons you probably won’t post this. Just having a bit of fun.
The DC Demon. Some believe there is a creature lurking in the White House who is both horrible to behold and possessed of the supernatural power to enslave the minds of those around him. Legend has it that he can be seen haunting the corridors of the West Wing after midnight, uttering incantations of 280 characters or less, and demanding of anyone he meets that they provide him with copious amounts of burgers, fries and Diet Coke. Many believe that he is a hybrid of orangutan and reptile due to his orange hair and forked tongue. When confronted he will deny that he is a malevolent demon and claim he is just a “regular guy”, but then he is known to be incapable of telling the truth. Be afraid, be very afraid!

Dowagiac is such a nice little town, so cool that it’s getting included with a cryptid! I’d never heard of Dewey till now.

Not sure what it was called, but I listened to a podcast about cryptids and it talked about basically a mondern day dire wolf/human combo that lived on a ranch somewhere in Utah. A family moved in to an old ranch and noticed that all the windows and doors were tightly secured and that there had been wolf sightings years ago in that area. The new owner didn’t think much of it until they found some dead cows with holes in them. No blood. Then the owner saw what looked like a wolf from far away. The wolf creature basically ends up running up to him and he shoots it. The gun does no visible harm even though it made a hole in its shoulder. Then the wolf creature casually walks away. The guy ends up looking for one of his missing cows and finds it dead. He also finds a calf getting attacked by the thing and being carried off. If I remember correctly he tries chasing it down and it outruns him on his horse. The guy doesn’t know what he’s up against so he tells a local wildlife expert who shows him different species of wolves. They pass a picture of the creature and the wildlife expert tells him that the it’s a Dire Wolf and it hasn’t been alive for thousands of years.

This one freaked me out because bulletproof giant wolves that were supposed to be dead is something that would definitely take advantage of my mild fear of dogs.

In South Africa the Tokoloshi is an evil creature about a foot high resembling an evil monkey. Locals believe that raising the bed above the ground will keep you safe. As a kid I loved climbing onto the beds raised up on bricks or empty paint tins. 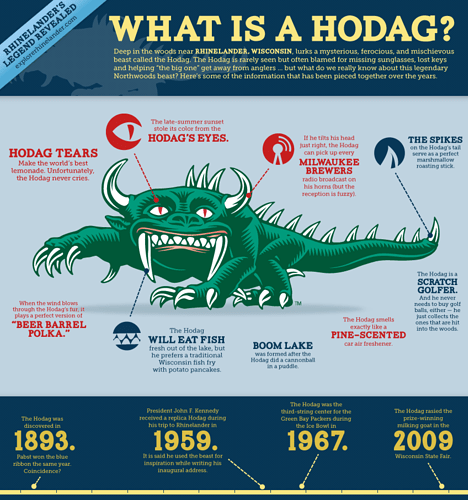 It’s not exactly a local cryptid with where I’m currently living but I have always liked the concept of the Barghest and canid cryptids in general.

In Northern English folklore, the Barghest or Barguest is a mythical monstrous black dog with large teeth and claws, though in other cases the name can refer to a ghost or household elf, especially in Northumberland and Durham, such as the Cauld Lad of Hylton. "Ghost" in Northern England was pronounced "guest," and the origin is thought to be of the combination burh-ghest, "town-ghost." Others explain it as cognate to German Berg-geist, "mountain ghost" or Bär-geist, "bear-ghost". Another moot...

Also , not really a cryptid , but most definitely the werewolf.

We always love a Hodag. 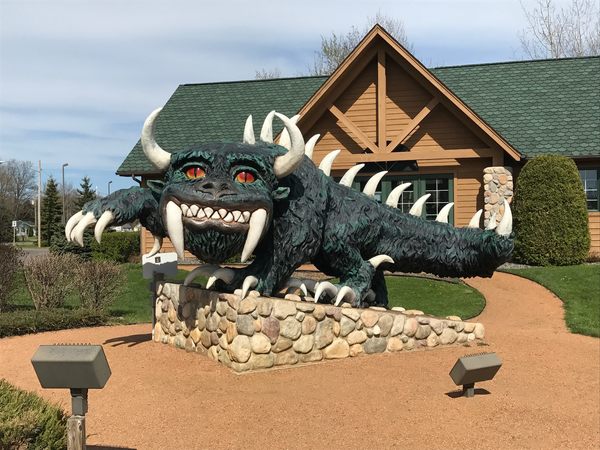 The menacing creature had a tremendous influence on the local culture before being exposed as a hoax.

A few years ago, there were reports of a mangy coyote in our area. Yardley is just up-river and it got the moniker of the Yardley Yeti.

I was out for a drive in nearby Morrisville a few days after the initial reports, and I may have seen it. What I saw, however, I can not with any certainty describe as of this earth.

It was crouched beneath a car and all skin and bones. I was glad I was safely in my car and shined a flashlight on it. It somehow had spines running the length of its back and flames flickered in its pupils. I couldn’t take my eyes off it. It flicked its tongue at me which forked twice as it tortured me. It may have forked more times, possibly into infinity, but I had merely human eyes with which to watch it.

It then spoke to me, perhaps in Urdu, but I could not understand its speech any more than I could its endlessly forking tongue. I’m not entirely sure how it got flames inside its eyes either, but I saw it.

It was the Morrisville Monster, and I can definitely understand how these tall tales can grow, and why Albrecht Durer drew that Rhinoceros that looked like a tank.

In American folklore, Champ or Champy is the name of a lake monster said to live in Lake Champlain, a 125-mile-long body of fresh water shared by New York and Vermont, with a portion extending into Quebec, Canada.
https://www.lakechamplainregion.com/heritage/champ

My family built a cabin in a very remote area of Upstate NY called Bear Swamp. Being at 16 and in high school, it ended up being very popular hang-out for parties. Upon arriving one Friday night we found a badminton wrapped around a tree in the driveway- thus starting the legend of the “Badminton Killer”. So random and in-explainable! We had lots of laughs. Even now, 40 years later, I will ever so often run into someone from my early years who speaks of the BK

The Loveland Frogman, from Loveland, Ohio, is one of my local favorites. The first sighting is described below:

"The story of these unique creatures begins in May of 1955, on a lonely stretch of road that runs along the Miami River in Clermont County, just on the outskirts of a small town known as Loveland, Ohio.

At approximately 3:30 a.m., an un-named business man claimed to have witnessed three, bipedal, quasi-reptilian entities congregating by the side of the road. The man pulled his car to the curb and observed these creatures for what he estimated to be about three minutes. During this time he noticed that these strange beings stood between 3 and 4-feet tall, were covered with leathery skin, and had webbed hands and feet. Their most distinguishing characteristic, however, was their distinctly “frog-like” heads, which the man claimed bore deep wrinkles where their hair should have been.

Just as the man was about to steal away, one of the creatures suddenly held what the witness could only describe as a “wand” above its head. The anonymous source further claimed that sparks spewed out of the end of this device. He left posthaste."

I love how they have been reported wield sticks as tools, and somehow make them emit sparks, meaning they must have some kind of magic! Such a quirky and random cryptid.

Below is a supposed sighting in 2016: 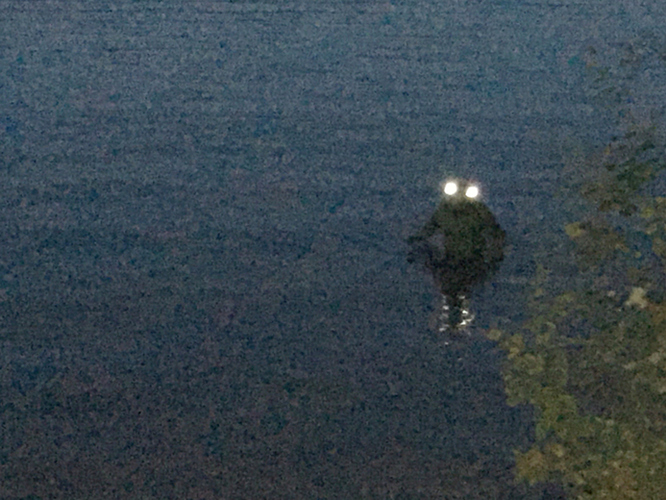 Ogopogo is very well known and famous in the Okanagan Lake of British Columbia, Canada. There have been many sighting of this lake monster as far back as 1872. Read more at https://www.ogopogoquest.com/ogopogo-legend.php

I have to go with the Michigan Dogman. In the woods of Northwest Lower Michigan there is said to be a bipedal dog creature that has a howl that (conveniently) sounds of a human shriek. It’s so entrenched in local folklore that there is actually a song about it that is played on the radio every year. Also a local filmmaker made a movie about it starring Larry Joe Campbell! It even appeared in episodes of the shows ‘Monster Quest’ and ’ Monsters and Mysteries in America’

The Bullebak lives under a bridge across one of the many canals in Amsterdam. Children are told that the Bullebak might come out of it’s hiding and grab them, so they better behave. The Amsterdam Council not to be outdone actually named two bridges after the infamous Bullebak. So a visitor might try out the bridge in the Marnixstraat crossing the picturesque Brouwersgracht canal. Or can choose to admire the view from the bridge to the equally enjoyable Bloemgracht canal just a bit farther up the same street. Take care though, since the Bullebak seems to have an equally voracious appetite for unwary travellers.

In the mountains of central Arizona we have the Mogollon Monster, a southwestern variant of Bigfoot. First sighting seems to have been by Boy Scouts in the Payson, Arizona area in the early 1940s. Other tales involve attacks on prospectors in remote cabins, harassment of campers in the Sierra Ancha, etc. When I was a Scout in the early 1960s, tales of these encounters were told around the campfire to mutually scare the bejeezus out of one another. Good luck getting to sleep in your tent!

The local cryptid is the Beast of Bray Road. There are several encounter stories about it, ranging from a dog-like humanoid running across a road to three of the creatures hunched over a watering hole, observed in secret from a distance. The beast seems to be a human-canine hybrid, not a werewolf. It was first reported in 1935 but I don’t know that there has been any activity lately.