The B-29 at the bottom of Lake Mead

Gosh, I haven’t found something AO worthy that isn’t already in the atlas for a while. I checked the AO map of all places and couldn’t find any reference to this. There’s another story about another B-29 crash site in England, but not this one. I was actually researching another WW2 plane crash rumored to be in Nevada, but found this one. (I also just finished a book on the discovery of a U-Boat off New Jersey in the 1990s, and the divers that identified it. Evidently it’s my month for underwater WW2 wreckage.)

In 1948 a B-29 bomber crashed into Lake Mead, outside Las Vegas. Three engines were lost on the initial impact and the plane skipped and skittered to a stop. The 5 man crew was able to evacuate.

Depending on the water level in Lake Mead (read: drought conditions), the plane can be at a comfortable depth for diving (there is a permitting process, and you need to go with an approved dive outfit.) or it can be well out of reach. The wreck remains fairly intact due to the stillness and ecosystem of the lake. 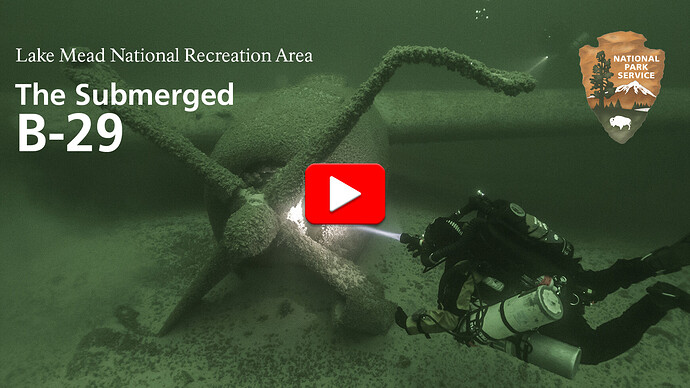 Thanks for sharing this @hootmalalie! I’m struck by the idea of journeying to the bottom of a lake for further hidden wonders!