Deep in western Kenya, three kilometres outside Kakamega town on a ridge that overlooks the Kisumu-Kakamega highway, stands The Crying Stone of Ilesi.

Known in the local tongue as Ikhongo Murwi, it is about forty metres tall – a large boulder balanced on a column of rock with water flowing from a groove in the centre.

The strange rock formation resembles a solemn head resting on weary shoulders and, from certain angles, it looks like a person who is crying.

However, in recent years, the tracks made by water running down the rock face have been more visible because the Crying Stone of Ilesi is often dry. It hasn’t cried continually – as it once did – for years, and the exact cause is unclear.

Some point to agroforestry activities in Ilesi, where eucalyptus trees – called money trees because they are sold for use as electricity poles – have been planted en masse, sucking up large amounts of groundwater.

Others blame the effect climate change has had on precipitation levels, something that has led to water sources below and above ground being tapped much faster than usual.

A climate risk profile on Kakamega County published by Kenya’s Ministry of Agriculture, Livestock and Fisheries reveals that while there has been an increase in the average annual rainfall in the county in recent years, it has been erratic and largely concentrated in highly intense bursts.

“Farmers noted changing seasonality, including delayed onset of rains, for instance from March to April; unreliability and variability of the rains; reduced or increased amounts of rainfall; higher temperatures during the hot season; and much lower temperatures in the cold season," the report said.

Still, the science linking dropping precipitation rates to the drying up of the stone’s water is unclear.

Samuel Ayieko, a Water Resources Management Authority official in Kakamega, said when water flowed down the stone, "it meant that it was going to rain”.

Much about the stone has a mythical quality. “Water is supposed to drip down; the unique thing about the stone is that the water comes from the top, so it can’t be a spring.
In recent years the Crying Stone of Ilesi has run dry, leaving visible the tracks made by water that once flowed down the rock face.
In the lobby of the plush Golf Hotel in the heart of Kakamega town, a painting of Ikhongo Murwi is prominently placed. Kakamega is replete with symbols of the stone, from the numerous hotels in Ilesi named after it, to the county flag with the stone at its centre.

It also features prominently in local lore. Among the Isukha community that lives nearby, it is believed the stone’s “tears” are a harbinger of a bumper harvest, while in pre-colonial times, before the British expanded their influence in Kenya, the rock acted as a good omen for local Isukha warriors.

One account says Nandi warriors, believing the rock was a source of strength for Isukha fighters, tried to pull it down but failed. By the end of the day, more than 100 Nandis had died in battle. 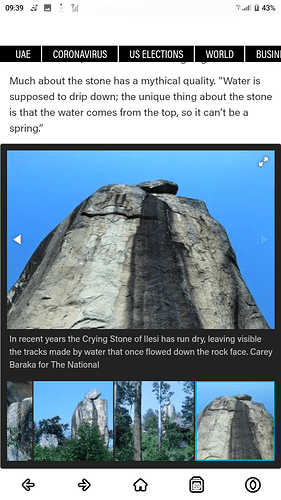