The Meninas are back again ! (Madrid, España)

The meninas are back again .After the success of the exhibition of the meninas at the beginning of last year, 50 meninas once again spread around the streets of Madrid decorated by artists, musicians, actors, fashion designers or bullfighters.
Meninas Madrid Gallery is one of those exhibitions that try to bring art closer to the general public through the exhibition on the public streets of striking statues. It has its origin in other initiatives such as the 2009 Cow Parade show in which multicolored cows filled the streets of Madrid. The idea of ​​replicating meninas velazqueñas part of the Italian artist Antonio Azzato, who wanted to pay homage to a Madrid icon and for this was chosen this lady of honor of Princess Margarita of Austria that appears in the famous painting “Las meninas” by Velázquez. On this occasion, once again well-known celebrities of the Spanish life, such as Rafa Nadal, Ouka Leele, Samantha Vallejo-Nájera or Antonio Azzato himself participate. The figures of 1.80 meters high and 30 kg in weight, are located throughout the central area of ​​Madrid. They have included a QR code where you can download information about the menina. This weekend is the last one which you can watch them while visit the city. More information in this link: ¡Vuelven las meninas! (Madrid, España)

Yep, saw them when I was there two weeks ago: 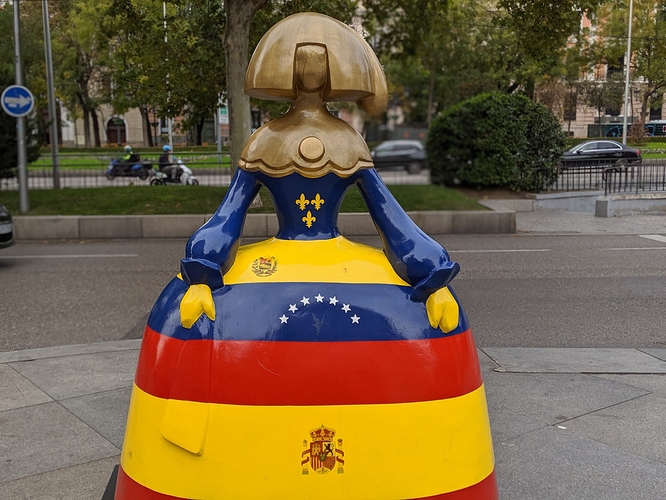