Welcome to the Atlas Obscura Community discussion of The Triveni Sangam in India. Ask questions or share travel tips, experiences, pictures, or general comments with the community. For the story behind this place, check out the Atlas Obscura entry: 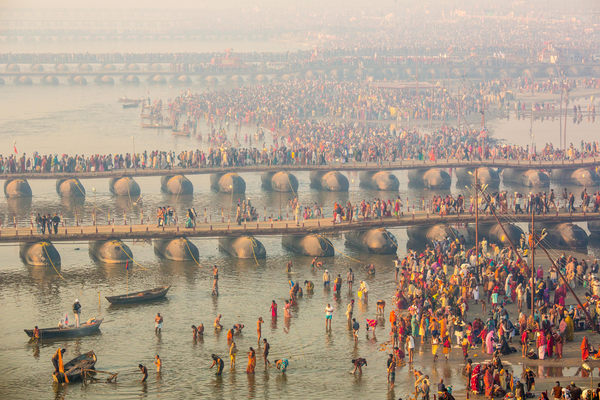 The world's largest human gathering is held at the confluence of three sacred rivers, one of which is mythical.

Hi, Thanks for well written article. Indeed the atmosphere at Kumbh is one of its kind. However a small correction I would suggest in the article is on the status of river Saraswati (as mythical river). The status of the river you may kindly either watch in the short presentation below or read the text. Interestingly enough the status of the river at Prayagraj /Triveni Sangam was well known even to the then English traveller Peter Mundy in the 17th century as given in his travelogue but has been lost among the common masses for last century or so. Thanks for putting up great posts promoting tourism.

Text Summary:
At Triveni Sangam Prayagraj or erstwhile city of Allahabad we only see two rivers merging together i.e. Ganga & Yamuna. However then why is the place called Triveni, where exactly is the third river or is the third river just a myth. I have always believed that most myths in India have developed on the basis of some underlying history or phenomenon/event from our past, its just that most of the time we are unable to decode them & hence either dismiss them condescendingly as people of olden times not exactly knowing/understanding the world they were living in or go completely the other way & giving some magical/out of this world reasons.
Well technically there is a third river which during the Vedic times was the most important river of that region known as the Saraswati river. The waters of this river are now carried within the Yamuna river. The original stream of the Saraswati river is what we know today as the “Tons river” it comes out of the Swargrohini glacier (one of whose peak the Pandavas tried to climb at the conclusion of their rule, indicating the sacredness of the river in those times). It meets with the Supin & Rupin glaciers, flow parallel to the Yamuna river at some distance. In historic times it used to flow from the Himalayas, entering Haryana flowing north of Kurukshetra then entering Rajasthan & parts of Pakistan before emptying its waters in the Arabian Sea flowing through the Rann of Kutch. This river had two large tributaries Drishdavati which flowed South of Kurukshetra making the whole region sacred & was at that time known as “Brahamavarta” or the land of the Brahma & was supposed to be the region where the great Vedas were composed & the second was the Satluj.
The river started drying up around 3000 BC due to tectonic shifts, it is said that earlier satluj was a tributary of Saraswati but changed it course & started meeting Indus river, also there is a Delhi-Hardwar ridge that are essentially underground Arravalis which moved higher due to the tectonic shifts & its other significant tributary “Dhrishdavati river” which one can still observe its river bed at Rakhigarhi changed course. Making Saraswati flow so less that it stopped flowing into the sea as was observed in Mahabharata by Balrama while he was making a religious trip during the War.
The final death nail for Saraswati happened around 1900 BC when “supposedly due to a tear/again tectonic shifts” in the Himalayas the river stream which is now called “Tons” changed its course and started merging into Yamuna river at a place called Kalsi in the Doon valley close to the city of Dehradun. Interestingly the quantity of voter carried by this river is far more than the Yamuna stream & it is also today the largest tributary of Yamuna.
So technically when at Prayagraj it is said that its the merging point Triveni Sangam of Ganga, Yamuna & Saraswati it is not completely off-mark as the originial stream of Saraswati in the form of Tons river is carried along by the Yamuna river
Now another question that can spring up is that there are so many tributaries of Yamuna & Ganga so why not name those as well at Prayagraj and call that point as meeting of several rivers. Well to start with Tons/Saraswati is not just any tributary but the largest tributary of Yamuna just like Yamuna is the largest tributary of Ganga but more important reason is the fact that such was the importance of the river Saraswati (considered as the inspiration for Vedas & life giver for the Vedic civilization) that even as many of the people living in that region moved to the Gangetic belt after the Saraswati river dried up in its old channel they made sure that they remember the river even as its waters are hidden within the waters of the Yamuna river at the Triveni Sangam.