"The Uncertain Future of a Border-Straddling Liquor" Discussion Thread

Welcome to the discussion thread for the story, The Uncertain Future of a Border-Straddling Liquor. You can share your comments and thoughts about the story in the conversation below.

Okay, so I am headed to West Texas soon. Where can I get some of this stuff?

Very interesting! …but…Id like to add.something ans a possible solution…as a matter of fact SOTOL ia made of 3-4 different species of dasylirion.the one used in eeuu and chihuahua -mex, must be dasylirion wheelerii the most north species…which also grows in Mexico in the border states. farther south, althought found scarcely the wheelerii are dasylirion duranguense and d.cedrosanum and other dont remember. SO, GIVEN A origin certification stating species used could be a solution.and gives plenty of certainty to producersboth sides of border, as used in the mezcales identifying state and kind of beverage. the best flavor to me, is the one from durango-mex- Iknow because already made illustrations of the different species for a mexican company and the wheleerii is the label in one bottle produced in durango-mex. colouring added digitaly by designer drawing by me 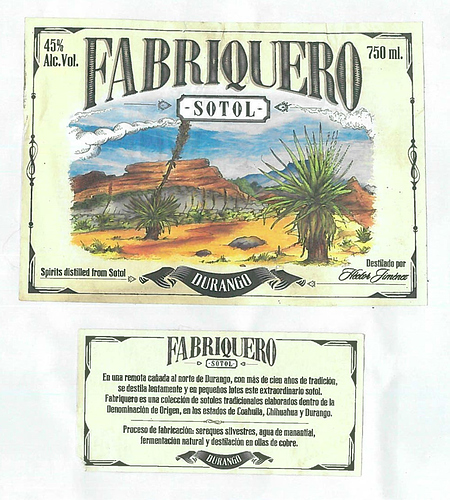 Why does the US have to usurp this? Just credit it as being Mexican & carryon with the business of production.