Welcome to the Atlas Obscura Community discussion of The Wolf’s Lair in Ketrzyn, Poland. Ask questions or share travel tips, experiences, pictures, or general comments with the community. For the story behind this place, check out the Atlas Obscura entry: 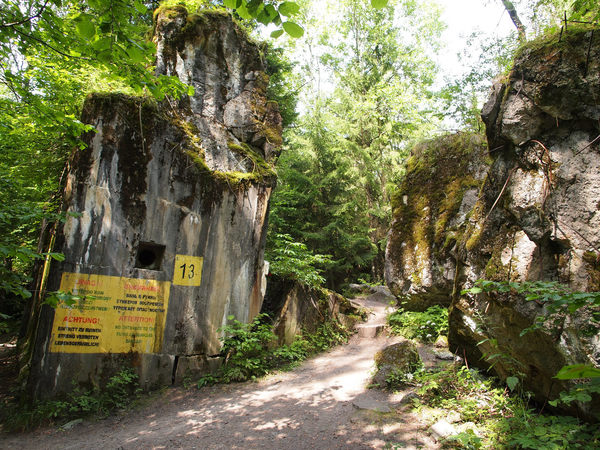 This Nazi ruin was the site where Hitler was almost blown up by a suitcase bomb.

This place makes a huge impression. While visiting it, you may like to visit Mazurolandia as well, and see unique historical artifacts, equipment and machines from the 2nd World War. It’s just one km from The Wolf’s Lair. Worth visiting.

You would think, with all that concrete, the blast would have been kept inside and totally destroyed anything inside. But, alas, it was not to be. Windows open and a penchant for slugs wanting to be nearer to the fruit allowed the superbug to live. Who knows, though, what would have come after Hitler may have been smart enough to win that war for Germany. Maybe it’s a good thing, in a way, he survived. just a thought.

One of the most interesting writers/ overall human beings in my opinion , Ernst Junger , was at least the intellectual inspiration of the July the 20th plot to assasinate Hitler and was utterly disdainful of the Nazis. But its very hard to categorize the political or philosophical stance of Junger , he was a warrior, yes, but I guess more than anything he was apolitical and more of an artist/ scientist/ existentialist (and 100 more things beside) and in fact hated the group psychology of mass movements.

If you look at Von Stauffenberg it would appear that he was motivated primarily by a desire to return to a pre-Nazi Prussian style political system led by a millitaristic aristocracy and a Kaiser type monarchy. This kind of stance was common within the German millitary and more so towards the end of the WW2. So I think that what would have probably occurred was an overthrow of the Nazi regime by a millitary coup , a kind of millitaristic cannibalism.

I dont think the demise of Hitler would have led to any kind of renewed effort that would have meant the Nazis winning the war. It is one of the tragedies of history in my opinion that the bomb hadn’t been placed a little closer to Hitler, close enough that is to blow him into smouldering pieces of fascist flesh.

By the time of the 20th of July plot the S.O.E. agents had already assasinated Heydrich in Prague and he was widely considered the most rabid and most dangerously fanatic of all the psychopaths of the Third Reich. He was the architect of the Holocaust and also the most dangerous because he was incredibly well versed in terms of millitary strategy. Heydrich was almost certainly the next in line to Hitler and was being groomed to eventually take his place so his liquidation was a necessary strategic move to bring about the downfall of the regime. This just makes me admire Jan Kubiš and Josef Gabčík all the more because they ultimately sacrificed their lives to bring about a key objective which would eventual cause the collapse of the Third Reich.

So , consider the actions and personalities of the remaining members of the Nazi regime.

Goebbels was not a leader or a figurehead , he was a right hand man / crony and although he was a proficient propagandist he wouldn’t have been able to fill the hypothetical void left by Hitler. Also his suicide at the end of the war strongly indicates that he was unable to live with the death of the beloved despot he hero-worshipped , he is even quoted as saying : “It is a great pity that such a man (Hitler) is not with us any longer. But there is nothing to be done. For us, everything is lost now and the only way out left for us is the one which Hitler chose. I shall follow his example.” A powerful propagandist and schemer , yes , but a sycophant follower at the end of the day and not a leader.

Himler’s relationship with Hitler had deteriorated towards the end of the war and he was already making moves to pursue peace and when he was captured by the British forces his reaction was to kill himself. He was known to be an incredibly cowardly individual in terms of his personality traits. Neither of these qualities strike me as showing that Himmler would have been willing or capable of carrying the war effort forward with Hitler out of the picture, again this is a follower and not a leader.

Goerring was another character who when he saw the direction the war was going , chose to leave Berlin and attempt to save his own skin. When the US army was approaching his castle he chose to surrender and its even said that he held ridiculous pretensions of convincing the Americans that he would reinvent himself and become a democratically acceptable leader in the post Nazi Germany. Goerring was ultimately a narcissist who only really cared about amassing his own power and at the end of the war saving his own vile skin.

I think the only figure who may have tried to fill the void left by an assasinated Hitler would have been Martin Bormann. As Hitlers main aide he would have been seriously dangerous and cunning , just like a cornered rat. But he was a bureaucrat and was definitely not a capable millitary leader and he lacked not only the popular support but also the “charisma” and “magnetism” and status of his psychopathic master, Hitler. Therefore I think its pretty evident that Bormann would have totally failed on all levels to drive the war forwards.