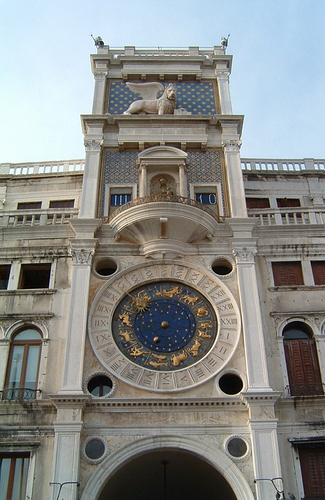 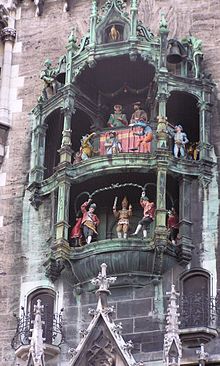 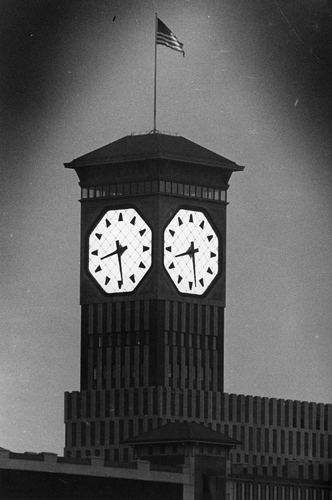 By far, the Engle Clock at the NAWCC National Clock and Watch Museum in Columbia, Lancaster County, PA https://www.youtube.com/watch?v=GJmbAX9V-jQ![engle_clock|375x500]

There are plenty more ornate ones here, but passing by the Eastern Columbia Building in downtown LA always makes me feel like I’m walking around in a Raymond Chandler novel. 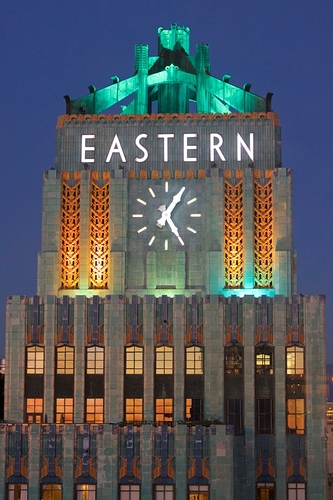 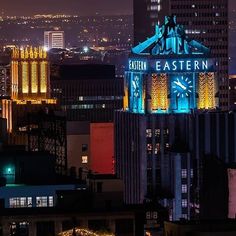 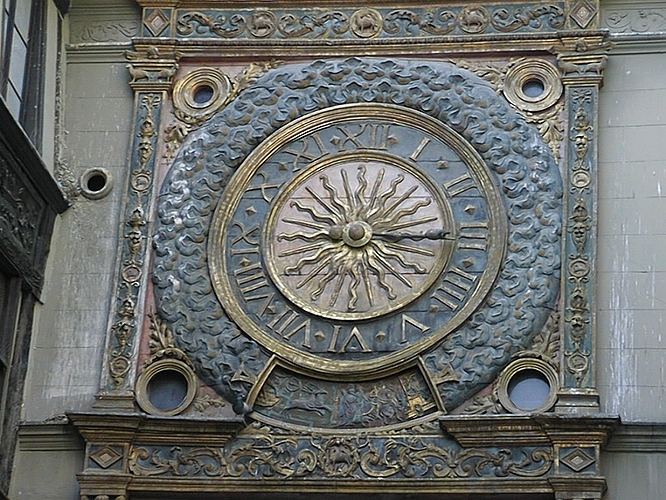 not rebuilt… still the same as pictured

When I was in school in the 1950’s the clock was in the tower that the temperature display is in now and this clock tower was constructed, opening in 1962 I understand,

London’s Big Ben is not a clock, it is the bell.

Yes. I love this one.

The Zimmer clock in Lier Belgium was constructed in the 1930’s and installed in a tower that was originally a medieval keep. It features 12 dials that show the locations of the planets, phases of the moon. the zodiac and much more. And, you can sit in the square sipping a Belgian ale while watching it.

Old Town Riga has three different clocks that impressed me in different ways.

There is a beautiful blue and gold astronomical clock on the facade of the House of the Blackheads, a merchant guild house which is itself one of the architectural gems of Riga. The original house was built in 1334, but razed by the Soviets after it was damaged in World War II. The house was rebuilt from 1996 to 1999.

Although Riga is known for its hundreds of Art Nouveau buildings, one of its features is the Laima Clock, an Art Deco piece that was built to advertise the Laima Confectionary Company in 1924. It is just down the street from Riga’s Freedom Monument, a signature monument that somehow escaped Soviet destruction during the post-WWII occupation.

And there is a large universal sundial on the plaza in front of the Riga train station. As long as you know what day it is, and the sun is shining, you can position yourself accordingly and the sundial will tell you the time. Around the rim of the sundial, you’ll also see the distance to other European cities. 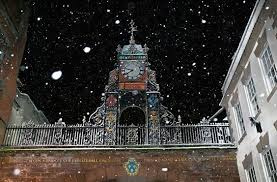 The Eastgate Clock, Chester, UK. https://images.app.goo.gl/6i6JeMCRThcf9nmC7. Eastgate and Eastgate Clock - Wikipedia. From my beautiful home city of Chester in England, UK.
As a small child in the 60s, I would often walk around the ancient city fortress walls with my father and grandfather starting from the clock in Eastgate street. I would love to stand behind the rails under the clock and watch the bustling crowds below doing their shopping. Christmas was my favourite time because the festive lights made it seem magical! ! 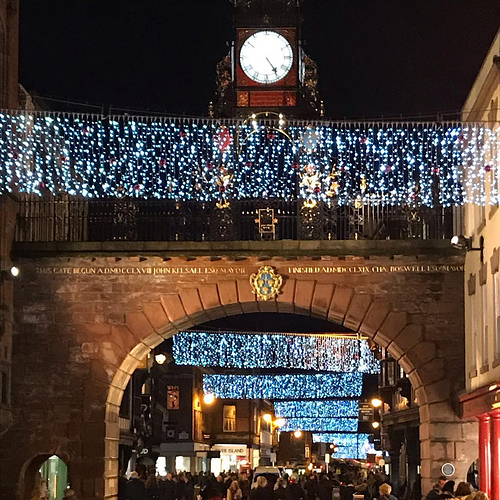 When strolling through Tbilisi in the beautiful country of Georgia in 2016, we came across the most quirky and lovely leaning clock tower. It is called შავთელის ქუჩა, გაბრიაძის თეატრი in Georgian. The clock tower is located next to the Gabriadze theater in the city center and was created by its namesake, the famous Georgian puppet maker Rezo Gabriadze. Every hour, a window opens at the top and an angel strikes the bell. Below the clock, a screen opens and shows the circle of life with a young couple, marriage, babies and a funeral. The photos are my own, unfortunately I forgot to take pictures during the hourly puppet show. 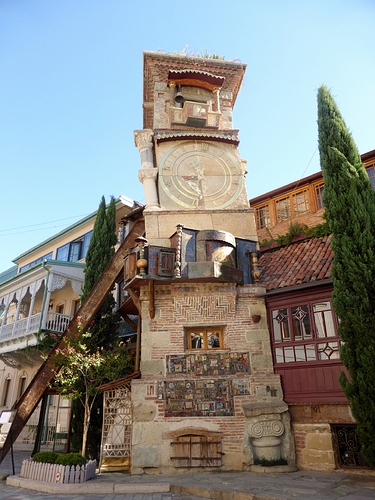 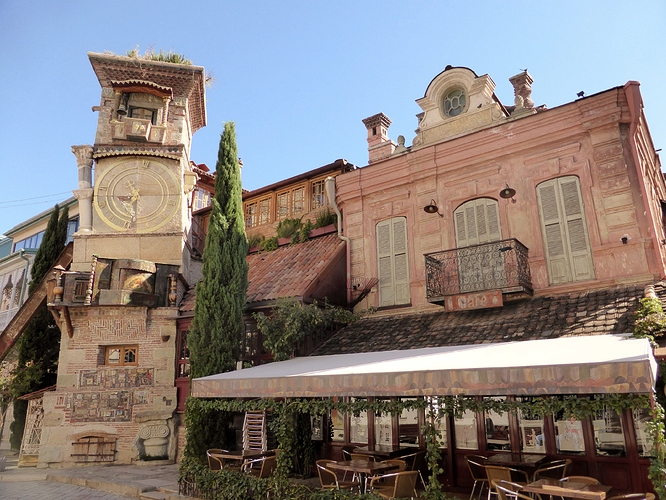 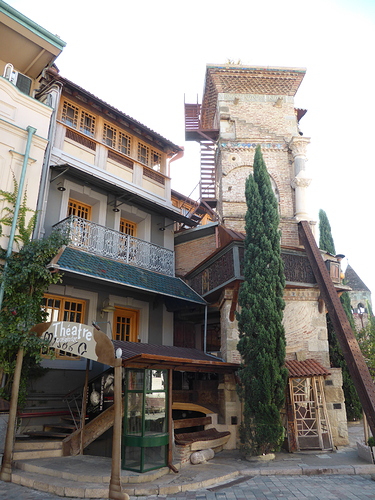 The Andalusian Clock of Testour, Tunisia. The numbers are in reverse order and it runs backwards.
The clock is in the minaret of the 16th-century Grand Mosque; it is extremely rare for a minaret to have a clock. The minaret was built by Muslim refugees from al-Andalus, Spain, with help from Jewish refugees from the same area.
A popular legend says that the clock runs in reverse to symbolize the longing of the refugees to return to their homeland, but in reality no one knows. 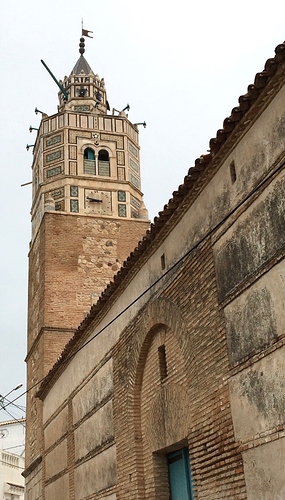