Welcome to the Atlas Obscura Community discussion of Track 61 in Manhattan, New York. Ask questions or share travel tips, experiences, pictures, or general comments with the community. For the story behind this place, check out the Atlas Obscura entry: 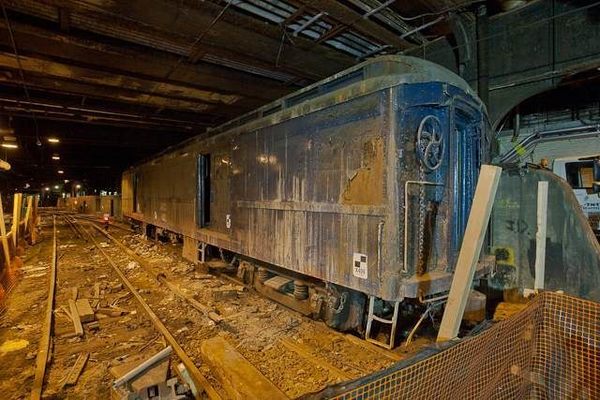 This abandoned subway station beneath the Waldorf-Astoria hotel is allegedly used to secretly transport presidents.

Why not reuse as a Museum alone?? or TV & Movie production, such a waste if served VIPs back then. & other uses:
B&B Inn, Hostel, Pub, resturants, offices, business seedbed, IF renovated locally.

My mother was a private duty children’s nurse in New York City during the 1940’s; she was from Edinburgh, Scotland and had escorted sick children here for several years as Hitler’s power grew in Europe and got stranded here when the Atlantic was shut down to civilian travel. She found out that Scottish nurses were heavily sought for, especially by grandmothers as was the case when she was hired to care for a sick infant whose family lived in the Waldorf Apartments, adjacent to the Waldorf Astoria hotel.
As fall was turning to winter, it was time to retire to Florida and everyone packed up. My mother remembered sitting in the living room with the child and the rest of the family and then the head butler came in and said that all the luggage was aboard as well as the staff who were traveling to Florida. Everyone got up, the elevator was waiting, and it descended past the first floor and basement, and traveled down what felt like two or three floors and then opened up onto a train station with a car sitting there. By its window arrangement, it was not a regular passenger car. As she entered, she could smell there was something baking. One of the first compartments was for her and the baby, the crib was in place, my mother’s bag and her supply bag were there, as was the baby’s bag and a box of supplies my mother had ordered from the pharmacy. The butler stopped in to make sure everything was in place before the grandmother came in to check.
Everyone was asked to come to the lounge and be seated, it was time to depart. She remembered the bump as a train backed into their car, then the stop, and then the slow, smooth acceleration forward towards Florida.
That had to from Track 61, private cars outfitted and rented to those wishing to travel in comfort. It wasn’t just for presidents.