Welcome to the Atlas Obscura Community discussion of Treasure Island in San Francisco, California. Ask questions or share travel tips, experiences, pictures, or general comments with the community. For the story behind this place, check out the Atlas Obscura entry: 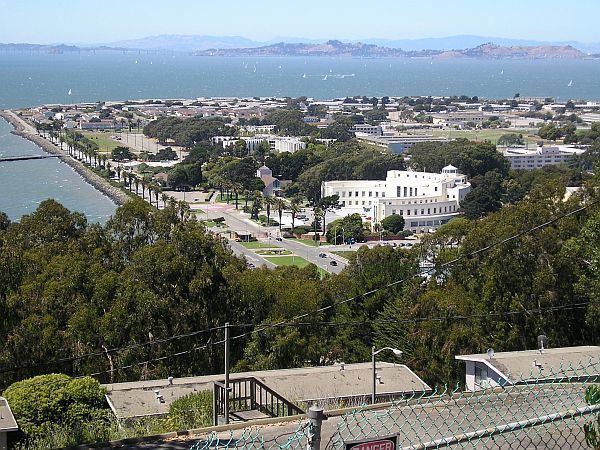 In addition to Grizzly Peak in Berkeley, this is a favorite place to get a view of San Francisco by night or by day.

I finished the Treasure Island triathlon in 2006, and it was a blast even in spite of the countless turns on the bike course.

I was headquartered out of Treasure Island while in the Marine Corps, though I was actually stationed at Oaknoll Regional Medical Center most of the time with a small liasion group in an abandoned amputee ward where the last of the Vietnam POW’s were processed. Our required visits to Treasure Island were as brief as we could make them in the time it took to pick up or deliver patients or prisoners( often the same people whose status changed depending upon location), official documents, or complete periodic physical fitness tests, drownproofing or gas chamber tests. Any downtime between those tasks and our speedy departure was spent hiding out near those concrete statues of nude women, Indians wrestling alligators and the empty topographical 3D map of the bay to avoid being shanghaid for shit details by roving NCO’s constantly in search of anyone not actively engaged in some assigned duty. The mere appearance of not being actively engaged met their qualifications. During this time I sometimes observed sailors in odd looking raincoats putting out fires on old hulks moored to island not far from the married NCO barracks, school house and playground. It wasn’t until years later while attending an Army National Guard Nuclear, Biological Chemical Warfare training course at Fort Chaffee, Arkansas that I realized those odd raincoats were MOPP suits, protective gear worn in toxic environments. I was very conscientious about wearing mine even during combat maneuvers in an Arkansas summer due to learning the final test was exposure to buckets of live bugs, chemicals and radioactive materials. I doubt it was a lethal amount but as the old sarge who gave me the headsup phrased it: “It won’t do you any good.”
Around 2015 or so I chanced upon an article about Treasure Island reverting to control of the City of San Francisco, which built low income housing around the area where the old playground, school and NCO barracks had been. In the course of cleaning up their mess, one of the Navy’s contract workers was hospitalized with radiation poison. This opened a huge can of worms when bit by bit the story emerged that following the nuclear testing in the Pacific in the early '50’s the derelict ships that survived the tests were towed back to San Francisco for decontamination training. Some were too “hot” to handle and the debris was buried beneath the area I described above. Since I’d never shown any signs of radiation poisoning on my VA checkups I figured the three or so feet of dirt had adequately shielded me from the radiation that was 400 times the acceptable limit of exposure. The Navy had thrown a lot of money at this to make it “go away” and I had no intention of mentioning it to my assigned physicians at the VA. I fulfilled my contract and they were still fulfilling theirs, so “not my circus, not my monkeys” was the attitude I took. But it got worse as San Francisco reporters refused to let it go. The contamination covered the entire island, and every breath of dust taken there, every sip of water added to your cumulative rads. On top of that a number of metal discs whose use the Navy denied any knowledge of, were found at various above ground spots on the island. Close exposure to any one of them longer than three hours was considered a lethal dose. At that point, I stopped following this story not wanting to know more than I already did and counting myself supremely lucky.
However, around the same time I learned that Oaknoll Regional Medical Center, a state of the art medical facility built to replace the old WWII era facility that our little band of jarheads invested, had been imploded. Dropped in its own footprint witnessed by a select few invited, none of whom I knew. In a comments section below this announcement, I recognized the name of a Navy Corpsman who along with three or four others who had split the cost of a really nice old house with me. We’d moved out of the barracks due to one of our escaped crazies shooting the gate guard, the Admiral’s house up on the hill and bouncing bullets off the Navy barracks where we’d been several times weekly at night. Shortly after we moved out he put one through the window of the room we’d shared in the barracks. When I was discharged they hadn’t caught him yet. I was curious to know why they’d imploded such a modern hospital that had also provided medical training for the Corpsmen assigned to the Fleet Marine Force. Turned out it had way over the limit asbestos and it was cheaper to blow it up than remove it. I’d always been asked if I had been exposed to high levels of asbestos or pesticides when I got my regular checkups at the VA and I’d always thought they were routine screening questions they asked everyone. Of course I answered yes to both, since as a child I’d walked rows of cotton dripping with DDT and a cocktail of other pesticides during the Golden Age of Pesticides in the '50’s. As a teen I’d worked in a factory that was later required to remove extensive asbestos insulation in the ceilings. Even later I’d stood downwind from cropdusters spraying the equivalent of Agent Orange. So yeah I’d my share of both, I just didn’t know I’d had a little extra that I hadn’t known about. Still I seem to be none the worse for wear so I must conclude I’m either some kind of Super Mutant or one of the luckiest guys on the planet. So I’m not going to jinx it by making any waves for the Navy. LOL! 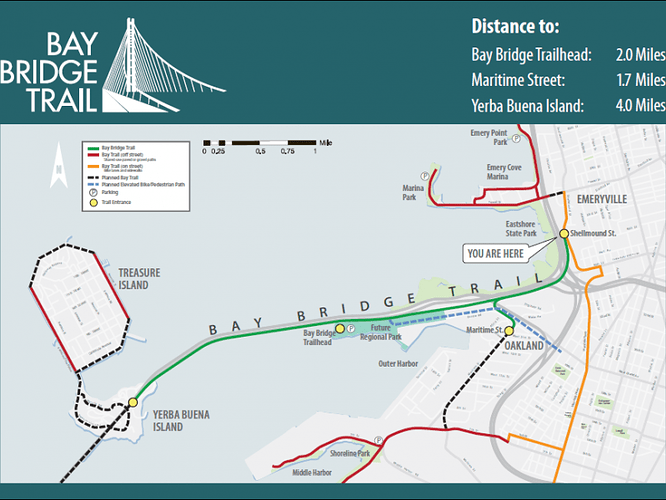 Since early 2016, most of Treasure Island has been a construction site, with many roads closed. The island is being covered in a few feet of clean fill and having seismic reinforcements driven into it. This will cap the multiple toxic hot spots and prevent loss due to sea level rise.

I just took a couple pictures for this post. There’s still a lot of wildfire smoke, so pardon the haze. This is the chapel on the West side surrounded by construction 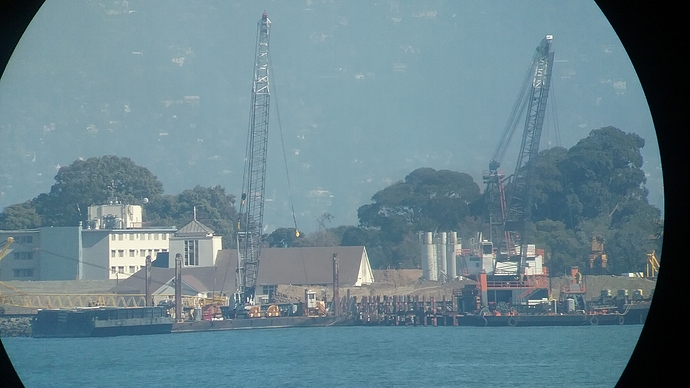 This is both Yerba Buena and Treasure Islands, from San Francisco’s Pier 15, near the eastern foot of Telegraph Hill. The white tower over Yerba Buena is the new eastern span of the Bay Bridge. Past the smoke is Berkeley and Emeryville, and the Berkeley hills. 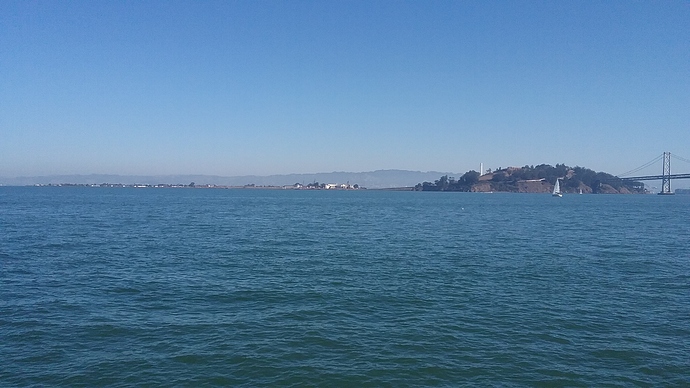 Like most SF Bay islands, Treasure Island is very cold and very windy most of the year. Get there in early fall and it should be okay. When construction is finished, it’s a nice location to watch the Fleet Week events in early October.

Yup, all true. They just started a ferry service to the island from S.F. You can see a bit of the statues and fountain on this platform. Search: “Pacific Unity Sculptures” and “Pacific Basin Fountain”