We have some rather paranoid new anti-marijuana ads popping up around Boise, Idaho from the (non-existent) “Office of Transparency” telling us that, among other things, pet poisonings are up 400%, traffic deaths have doubled, teens are ending up in the E.R., and pesticide levels are dangerously high in dispensaries in other states. It comes as no surprise when Idaho is now surrounded by pot-legal (either recreational, or medical) states.

Cleveland, OH has a couple gems, but I think my favorites are the Marc Norton furniture commercials. You can look at any number of them and they are consistently weird, played at night, and always feature the tagline: “If you can’t get credit in my store, you can’t get credit anywhere. My name is Marc, and you can count on it!”
As a bonus he was picked by the Taco Bell advertising team to make a weird mashup Norton Furniture / Taco Bell commercial during the Superbowl 50.

I went to NYU undergrad and the Crazy Eddie flagship store was nearby on 6th Avenue. Then, like William Fugazy, Eddie Antar got jammed up and the company went kaput. But his prices were INSANE!!! (And his ad appeared in the movie Splash.)

I remember listening to Super Dell and Totally Awesome Computers. I think he had some troubles after the shop closed.

My choice was for Gallery Furniture, too, but out of Houston, TX. Jim McIngvale has been an institution in this city since the 1980s

Before we had multiple area codes:

And after Hurricane Harvey in August 2017:

Yes know Cal Worthington very well,his son does same ads, but doesnt have “feel” that ads have when dad did ads then.
Dealership still active in LA CA area

There have been so many ridiculous Ricart ads that I don’t know how you chose one. Fred has retired and his son carries on the tradition.

Also, for years the Tom Raper ads said “Tom Raper RV,” with such enthusiasm and a kind of rolled R and emphasis at the beginning of the word Raper that it sounded like they were promoting Tom Raper as a man who attacked women sexually.

I have looked all over and I can’t find it, but there used tp be a commercial pretty much all over Ohio for a store called Sun TV and Electronics. There was a jingle that went:

The song was really annoying. I used to terrorise my brother and sister by singing it. This was in the late 80s or early 90s. Can anyone remember the rest of the song?

I was going to add a comment about Cal; glad you did.

Oh wow, I remember this one!

The ad for Frosty Morn Hams in the 50’s and 60’s seems weird in retrospect.

We don’t have localized TV ads here in Germany, but our Cinema always has local commercials before they run the big company stuff and trailers for other movies.

So there’s this one, and I’m really sorry and disappointed that I can’t provide a video because it’s really good and silly one.

It looks like a 90ies website with Neon colors and Comic Sans text and is about a butchery called Oberhammer who praise their hot vending machine that unlike their store is open 24/7. So basically, warm meat loafs and sausages any time you feel the urge. Praised highly by your typical shouting, overexcited voiceover.

This is silly enough by itself, it gets better when you understand the German name for the thing.

Sadly it’s impossible to actually convey the effect of it in English, because it’s only hilarious as a bad joke so explaining it would ruin it twofold.

This is very specific to that one cinema -and a butchery that has only three outlets and only in our very county.

To my friends and me the whole reel of the local ads that they will always play has become an anticipated part of the cinematic experience there. There’s also the terribly boring and bland ad for the Regional TV station that nobody watches (literally named “RegioTV”) and the cinemas own "don’t leave your trash on the seats sequence.

Growing up in Philadelphia in the '70s and '80s, my generation was exposed to quite a few ads that even today will trigger a response in folks of a certain age. The two that everyone remembers are-

Krass Brothers, Store of the Stars:

Betson’s Furniture, where EVERYBODY goes:

Okay, so this doesn’t exactly qualify as an “ad” however when I was a 1st year grad student at university in the early 1980s, I noticed a local billboard one day on my way home – the husband of a local sociology professor had rented the ad space to acknowledge his wife’s upcoming milestone 40th birthday. The billboard read: “Lordy, Lordy, Kay Gaston’s 40!” – simple, to the point, and with a touch of appropriate humor which the milestone deserved. Year after year went by, and, yes, the billboard and it’s celebratory message remained the same (turns out that particular billboard was in a “low volume” area and thus was seldom if ever rented). The last time I saw the billboard with it’s birthday message was in late 1989 – to my knowledge, it’s still there, while Professor Gaston now is likely in her 70s…assuming she is still on the earthly plane. So if you, kind Atlas Obscura reader, are a friend of Professor Gaston’s, and she is indeed still with us, please be sure to wish her a belated “Happy 40th” on my behalf!

The Eat n Park star should have a thousand

It was Becky not Betty. The lady in green is Becky Queen of Carpet, the other is Wanda Princess of Tiles. They were all over the tv.

If you lived in or near Fresno in the 1960s and 1970s, you couldn’t miss Al Radka hawking just about anything. His Oberti Olives commercials were particularly memorable - I can still sing one of the jingles.

Then there was Mack Lazarus, a car dealer whose catchphrase was “I’ll stand on my head to make you a deal!” When I was a kid, we ran into him at an RV show. My mom yelled, “Hey, Mack! Stand on your head and I’ll buy this trailer!” He just gave her a look, shook his head, and walked away rapidly.

This billboard seen on several interstate freeways in Michigan is an unexpected waypoint on trips between cities. It was immortalized in the lyrics of the band Frontier Ruckus in their song Springterror:
“And the billboard dentist from White Lake to East Lansing
With his day-glo halo sentence entrancing” 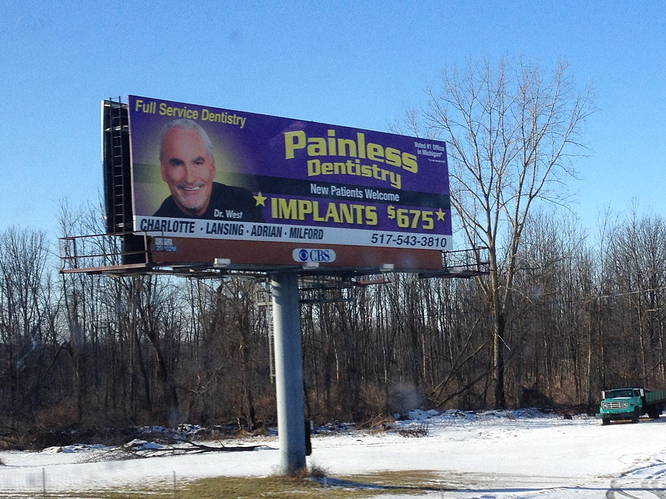 We go back to 1986, make an inspirational film about a scrappy kid overcoming impossible odds, and have Kenny Loggins record this as the theme song.