The 30 foot frank of Koegel Meats! Just a giant glistening hot dog with bright yellow mustard on a bright blue background. Iconic. Seen along the freeways in Michigan. 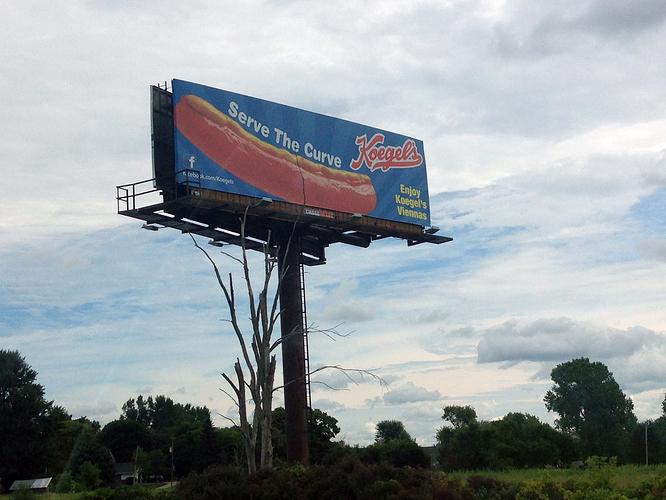 Cal Worthington used car ads from the 60s, 70s and 80s–a Los Angeles legend! Every week a Stetson-sporting Cal would parade around his lot with an exotic animal he called his “dog, Spot” and show off the newest arrivals.
There isn’t a 40-something local who doesn’t know the theme song. When Cal died in 2013, it made all the local news casts. 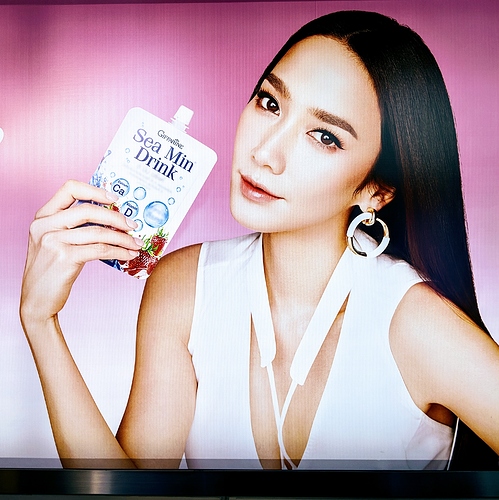 Somewhere there’s a joke about how sea-min drink comes in a conveniently packaged sack.

No video, just audio, this local bread bakery in Norfolk, VA produced a local star who played the character of Mary Jane, making public appearances. She appeared at a Food Show at the old Cavalier Hotel in Virginia Beach when I was a kid, and sang “Blue Navy Blue” a popular song of the time. Mary Jane Bread by Swamposo | Free Listening on SoundCloud

I grew up in southern California and, of course, thought Cal and his dog Spot was local. Turned out that he was all over the place - I even saw a commercial for one of his dealerships in Anchorage, AK in, I think, 1977.

If “all politics is local,” so was Cal Worthington.

An as far as billboards are concerned, when Forest Lawn mortuary opened in Covina Hills (east of Los Angeles), there was at least one billboard showing a couple in the front seat of a car, her arm around him, and the caption: “Caution, Freeway Lovers.” Now 50 years later, I still think that caption when I see folks in that position in cars on the road.

Oh man, I’d totally forgotten about this commercial. The memories have come flooding back…!

Also: how did they manage to get the phone number USA-1000?

I grew up in Maryland, but I remember Crazy Eddie becoming a national figure when David Letterman (I think?) aired his ads, or maybe SNL did a parody of him, something like that.

He was one of the first of the kind … he was loud, obnoxious and people hated him and he sold more things than anyone in the city - advert. classes used him as an example of what works.

Atlas Obscura’s HQ is in Brooklyn and no one’s mentioned Roll ‘n’ Roaster? I always show people this ad whenever I’m trying to convince them why it’s the greatest trash food temple:

haha I’ve never heard of this!

In Toronto, Ontario Canada we have at least 2 that everyone must know:
Mel Lastman’s Bad Boy furniture - He was the mayor of the city at one point!

This attempt to encourage purchase of Crape Myrtles in order to beautify the city caused quite the uproar in 1997 Abilene, Texas.

Those nachos at the end are an insult to nachos and cheese and food.

The Villager Tavern is a popular long time dive bar. The owner newly starting up took out advertisements on local bus benches letting folks know where they could get Poboy sandwiches, the sign was similar to this poster. Someone complained about that last line and all the bench signs were removed 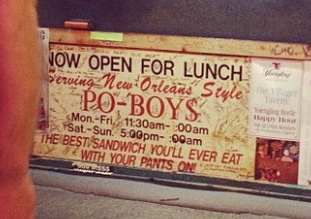 The Dick Poe commercials in El Paso, Texas in the 80’s and 90’s are unforgettable for us in the borderland.

Oops! I meant the Northwest!

You’re not kidding. Saw the article and I was absolutely going to add this one. I’m freaking humming it right now and I haven’t watched local television or listened to local radio in over a decade.