I took a road trip on 2/8/21 to visit the Casa Grande Arizona area. While visiting one of the Corona Spy Satellite Markers from an Atlas Obscura article, I stumbled upon a prehistoric petroglyph site. From the marker site, I noticed a nearby hill of rock and went exploring, the photos attached are the result. It was both mind blowing and sad. A very unloved area full of broken glass, makeshift targets, shell casings everywhere and a disturbing amount of trash of all kinds. Does anyone have any idea who I could report this to? It has what appear to be ancient rock art and more modern carvings which include the date 1929 and CCC. Around the backside, I found what looks to be depressions worn from grinding grain? The tip of my hiking stick is 3" in diameter for scale. 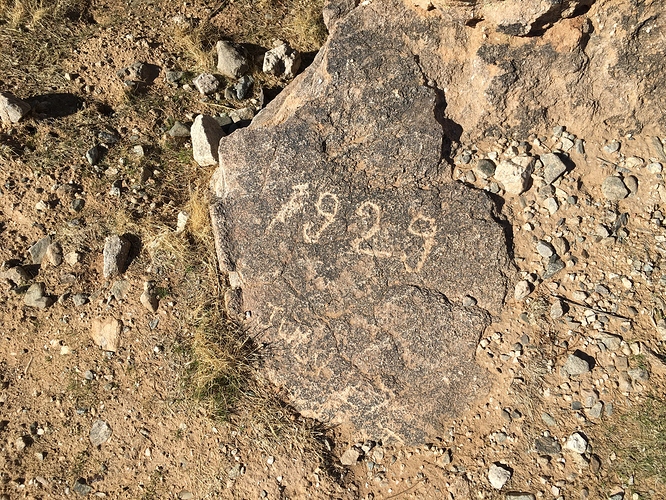 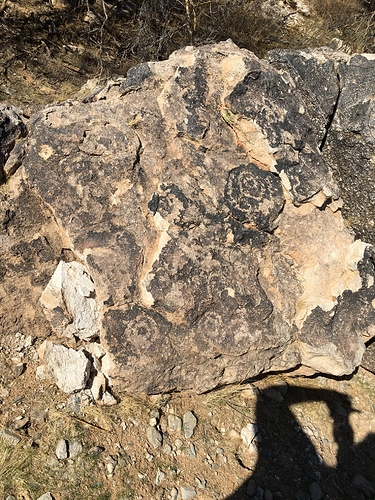 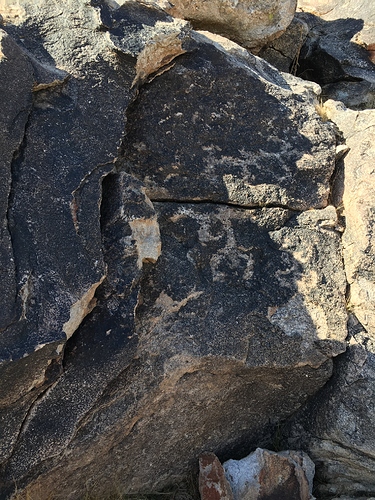 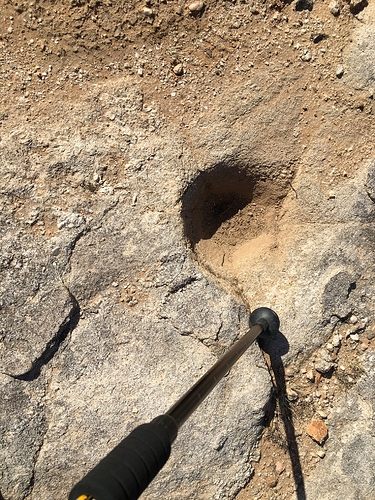 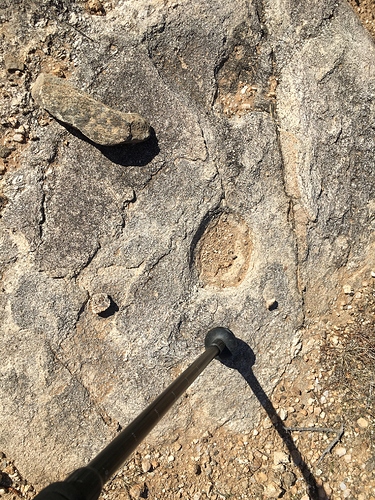 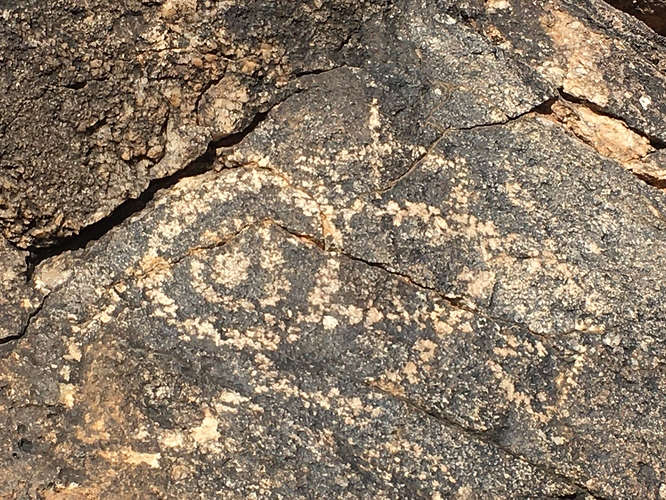 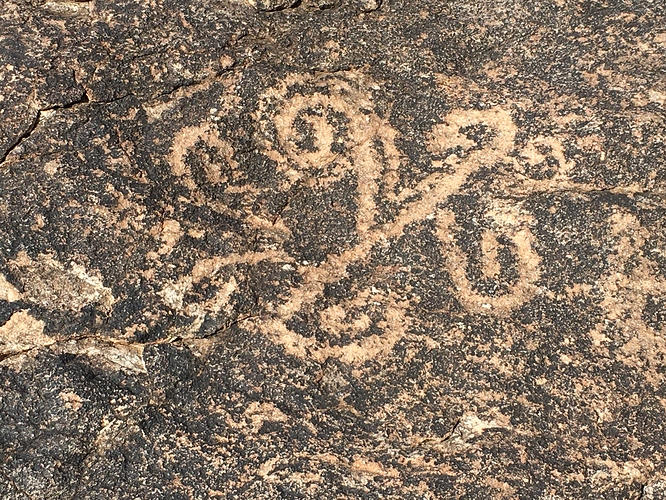 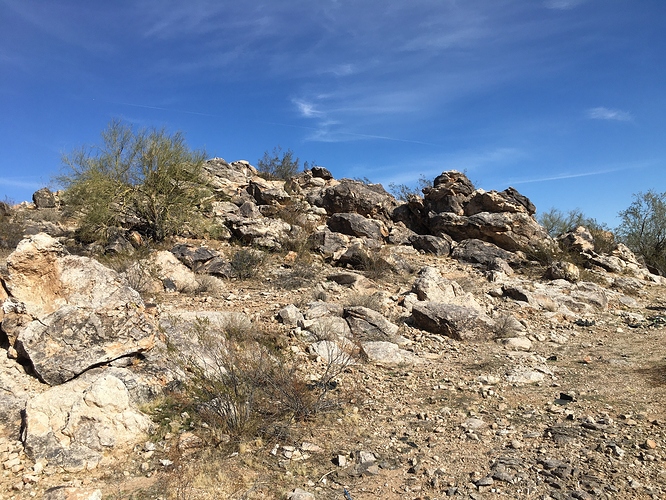 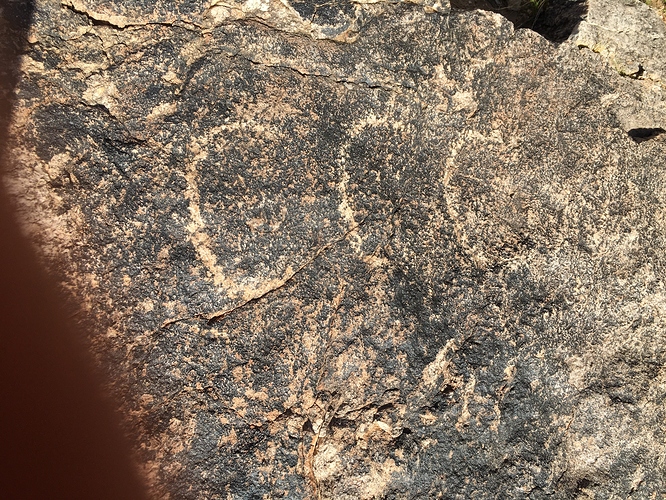 Who to report to depends on who has jurisdiction over the land it was on. For example, if it’s on Federal BLM land, you’d want to contact the regional BLM field office. If it’s on State Parks land, then you’d want to contact Arizona State Parks. If you don’t know who controls that land, ask around. Local historical societies or tribal authority if one exists in the area may know, or (at the last resort) the county assessor’s office may be able to direct you to the right party.

Thank you! I sent a detailed email to the city of Casa Grande and will update if I hear anything back.

You might try contacting the women who mapped the markers, who might be able to better say whose land/authority this falls under. Their address is art@2circles.org, and their website is: Home. The disrespect you describe is awful, but unfortunately (as a former AZ resident), not surprising.

It falls under the city of Casa Grande. I bumped into a cleanup order online for a spot very close to this. I reached out to the public works department that will be doing the cleanup. They responded about the trash but completely ignored the history part. Any ideas who to contact within the city of Casa Grande that might care? It was amazing to see the site up close but it looks to me like some of the ancient art has been chipped off and I wonder how long the site will even be around. It was literally surrounded by makeshift shooting targets, trash, broken glass and bullet casings. Not sure where to turn at this point.

Thanks for reaching out concerning your visit to the Casa Grande area. We strive to make Casa Grande a great and friendly place to visit. Unfortunately, we do have a problem in a few areas with illegal dumping. The City of Casa Grande conducts several neighborhood cleanup events throughout the year utilizing volunteer groups, clubs, and other organizations along with City resources to collect trash and other discarded debris. The Casa Grande Mountain Park area that you visited is scheduled for a cleanup event on Saturday April 3rd starting at 7:00am. "

Do you have any idea what city department I should contact? I bumped into a post about a cleanup nearby and contacted the public works department. The response only mentions trash, not one word about the historical part. Not sure where to turn next
"Lara,

Thanks for reaching out concerning your visit to the Casa Grande area. We strive to make Casa Grande a great and friendly place to visit. Unfortunately, we do have a problem in a few areas with illegal dumping. The City of Casa Grande conducts several neighborhood cleanup events throughout the year utilizing volunteer groups, clubs, and other organizations along with City resources to collect trash and other discarded debris. The Casa Grande Mountain Park area that you visited is scheduled for a cleanup event on Saturday April 3rd starting at 7:00am. "

I do not know, unfortunately, but you could always respond to the city and ask. While State, County, and Federal government definitely would, it’s conceivable a local government would not have a department that specifically deals with historical/cultural resources. Again, if there are any local historical societies in the area, they may be interested and have more resources to help you out. Same for any universities you may have in the area that have a native history/culture program.

I don’t know who to contact. I would looks for a historic association who could bring pressure—or even the police! I imagine the target shooting is illegal.

I’m wondering if maybe contacting the local museum, might help. Just a thought, and/or might be able to guide you in the right direction.

There is art and history all around us, evidence of human tragedy and triumph. We come to Atlas Obscura because of interest in many overlapping areas. This particular Southwest site is a good find, but without local government, university, and community support, it’s likely that nothing will be done. And that is because comparable sites are all around us.

I have ventured a few times to alert academics and governments and news media to sites needing protection of some sort, and while people may be interested for their areas of expertise, they have no great desire to pursue the matter.

Found the ruined, burned out, overgrown foundation of an artist’s winter home, with a lot of eclectic, eccentric touches. Exotic flora, sculptures, piles of large rocks from his travels, remains of a mural. Local museum and local college listened with interest, and put me in touch with an elderly local who remembered the artist as an old man. Then nothing… He was important enough to be listed in their art catalogs, but not enough for anyone to investigate the home site.

Came across a strange aquatic creature that appeared to be one that lived in a very limited area in natural springs. Yet the group I found was living miles away. University folks confirmed via my documentation and photos that this is the exact albino, blind, subterranean crayfish. So how do I get the range and habitat extended in the literature? Well, I don’t. And they don’t. A future survey may or may not include it.

A highway extension and bridges went through a nearby area. Some locals knew there were “lost” pioneer settlers graves being churned up, but the project went on.

I found an Eastern Rite Catholic church and rectory being slated for bulldozing. Rescued lots of books, altar vestments, candelabra. No one was interested. Seriously? No one wanted the altar cloths, the stoles, etc. No one, although many agreed that the sacred items had to be handled properly. So this atheist has them in storage.

In the last century, I came across pottery shards from the 1500’s in and around the Caribbean. Nothing that could be rebuilt, but confirmed to be from the early Spanish invaders/settlers. I was told then that there are too many sites of far greater importance, and nothing would be done unless I found shipwreck gold.

There’s a lot of UrbEx stuff out online. Old mines, abandoned ranches, as well as the urban landscape of abandoned factories and churches. Then the related interests in metal detecting and fossil hunting, bottle hunting, etc. People who do these things find lots of history and often lots of vandalized places. No one is interested in preserving and protecting unless it’s in their tight little purview.

It’s disturbing to us, but unless we can find someone to help us make a case for protection, nothing will happen. If those divots in the rocks are the only things that show habitation at that site, there’s little chance that authorities will care.

Then, too, a point could be made that if those divots were made by grinding grain, then they were living and cooking nearby. But if they were used for sharpening, that’s too transient in nature. Hunting party, perhaps.

Maybe your photo documentation will be important. Sometimes a local college with a photography program will be looking for interesting things to document or display. If your photos are good enough, local city hall or library may want to display them for a time.

Try the local library, librarians often have a lot of knowledge on local historical societies and the such.