Victim of the Beast Gravestone

Welcome to the Atlas Obscura Community discussion of Victim of the Beast Gravestone in Salt Lake City, Utah. Ask questions or share travel tips, experiences, pictures, or general comments with the community. For the story behind this place, check out the Atlas Obscura entry:
https://www.atlasobscura.com/places/lily-e-gray-victim-of-the-beast-666-gravestone?utm_source=atlas-forum&utm_medium=referral

Here’s the death certificate; died of a pulmonary embolism brought on by kidney disease: 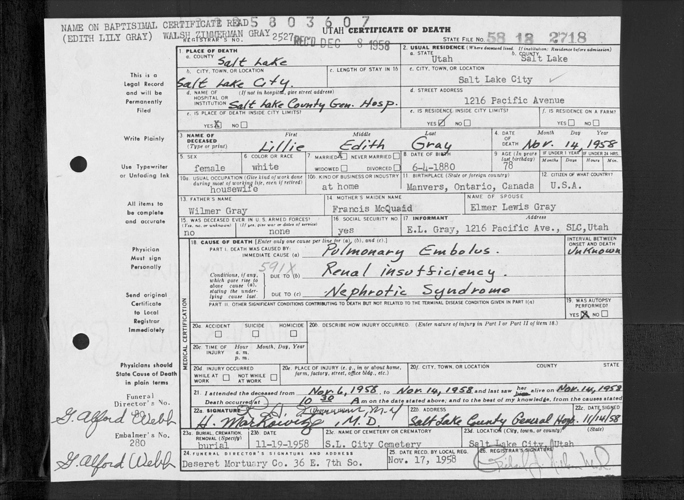 Here’s a thread on ancestry.com discussing the gravestone:
Message Boards

Several years ago I researched this and found out:

Lily’s husband was a bit of a rogue and had an extreme hatred of the government.

I don’t recall my sources, but the non-kooky answer seems to be that her husband considered the government to be ‘the Beast’ and they were ultimately responsible for her death.

Found this online.
“SALT LAKE CITY – One tomb stone in the Salt Lake City Cemetery gets a fair number of visitors, despite the fact that few people know anything about the woman who was buried there more than 50 years ago.

The inscription on Lilly Gray’s headstone had made her legend grow. As her grave reads, she is the “Victim of the Beast 666.”

“I grew up in Salt Lake and I’ve heard about it all my life, and I finally saw it a couple days ago and I came back to show Emily,” said Alex McComb.

McComb and Emily Ellers are among the many who come to see Lilly Gray.

The Utah State Historical Society gets a steady stream of questions about Lilly Gray. Doug Misner, library and collection coordinator for the Division of State History, said they do have information on the woman who died years ago.

However, another record in the state archives from 1947 written by Lilly Gray’s husband Elmer suggests something else.

“He indicates that his parents are both dead, died of grief when kidnappers ‘murdered my wife,’” Misner said.

Elmer Gray was in the Utah State Prison. It’s unclear why but he was appealing to the Board of Pardons.

According to documents, Elmer Gray indicates he was kidnapped by five Democrat officials.

The official record of Lilly Gray stops there. However, another document has surfaced.

Mike Ellerbeck owns Salt Lake Monument, which has been making headstones for more than 100 hundred years, including Lilly Gray’s. When a relative stopped by years ago, Ellerbeck made a note of her account.

“Elmer was considered by Lilly’s family to be quite a scoundrel,” Ellerbeck said.

The two met later in life. Ellerbeck said they had a special relationship but was almost secretive.

“He’s the one that ordered the marker,” Ellerbeck said of Elmer Gray.

While it is not clear why he chose that for the headstone, Ellerbeck said, Elmer Gray figured the government was the beast.

Lilly Gray’s family kept her away from her husband in her dying days. While the Grays were laid to rest in the same cemetery, Ellerbeck said, the two were buried as far from each other as possible.

“They were like two mists coming toward each other that united against all odds,” Ellerbeck said”