Welcome to the discussion thread for the story, What Happens When They Find a World War II Bomb Down the Street. You can share your comments and thoughts about the story in the conversation below.

Although San Diego California never had aerial bombardment, there were multiple bases and training facilities near the naval base in San Diego. After the WWII most of the bases were decomissioned and closed. My family and I were searching for new housing in 1972. Many housing developments were growing in the Northeast of San Diego. Miramar Naval Air Station still exists today in that general area. Mostly aircraft carrier fighter aircraft are stationed there, to be flown out to carriers awaiting about ten miles west of San Diego California. We had made an offer for a very nice upscale home in TierraSanta (the name of the development.) . Our home was completed and we were several days from moving in. We arrived, ready to close and start moving our furniture. As we approached the area, we were stopped by several military personal guarding a yellow tape across the road, along with a sign "Danger Military Munitions Present, Do Not Enter under penalty of law, KEEP OUT. This area was supposedly outside the area of the military base and training area. A the time (1944) the area in question lie over 40 miles from downtown San Diego. San Diego grew explosively (no pun intended) during the Vietnam War (1966-1971) San Diego served as the major west coast port for naval and marine training as well as a departure point from the U.S. The area was about 15 miles inland and was fairly remote, undeveloped and barren. Up the coast about 30 miles was the still operating marine base, Camp Pendleton used for marine tank training and is still in operation. As time has gone by from 1941 until 1971 San Diego grew toward the North, and Orange County grew to the south. Today it is a heavily developed residential and commercial area with the one highest property values in the U.S.
Some of the TierraSanta development was already built and homes had been sold and occupied.
Our home was being built bordering the former base on a mesa overlooking a canyon to the North.
As the area was being developed, some children already living in built homes would play on the cliffs of the mesas digging, dirt biking and whatever it is that kids do. A group had discovered a large piece of metal, which they proceeded to dig up. Few of them were around when the base was active. One of the more intelligent teenagers suspected something wrong. California has strict zoning and permitting regulations as well as real estate regulations. Full disclosure was required regarding toxic or dangerous substances, and a disclosure about the former base was included in the escrow documents. The children reported their findings to parents who called 911 the universal emergency telephone number. There was an immediate military and police response.
We cancelled our purchase agreement and were given a full refund of our down payment. As an afternote, the bomb was removed without incident, and a thorough search was made, resulting in finding ten more unexploded munitions. A disaster had been thwarted. Following this event all construction in the future would require a military survey. The incident put a hold on any further development. It took several weeks before an ‘all clear’ was announced. People already in their homes were advised to leave, and were given free housing in motels, military bases or left to their own devices during the evacuation period. San Diego was a navy town and many were retired or active duty navy. The entire San Diego community rose to the occassion and housed many of the evacuees until they could return to their new homes. Although it is now 2020 it brought back many memories of my time in the Navy in San Diego. By the way we decided to purchase a home in an other developing area, University City. It turned out the weather near the coast was much cooler and property values increased much more than in the Tierra Santa area. It all turned out well, turning lemons into lemonad

Grew up in a town on the coast minutes away from the English channel where unexploded or dud bombs left by the Luftwaffe’s raids on the UK were often (happened about 4 or 5 times during my childhood if I remember correctly) being found or washed ashore even 60 years later.

As a kid , most of the time , it meant being sent home from school early while bomb disposal units assessed the situation. This was really quite a highlight for me and I remember wishing they would find more of them as it meant time off school. 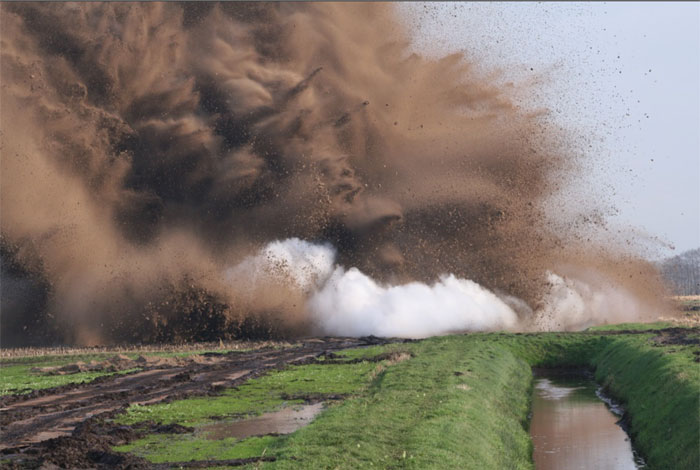 Back in 1985, we were active duty Army stationed outside Nuremberg, Germany, a suburb called Furth. Living in a modern 4-plex apartment building, an open field outside our front door was discovered to have an unexploded bomb. We had modern streets, and the Main/Donau shipping canal nearby. How this thing was still undiscovered after 40 years of construction and development in our area was always an amazement to me. Not much fanfare back then. We were warned to leave, but it was not enforced. I remember a crew had it all under control by the end of the day. Nuremberg was heavily bombed during WWII due to the location of the Nazi headquarters. No doubt, this is a fairly routine event in those parts.

Thanks for the link , I will most definitely have a read of it.

The original story was well told, and the comments are also enlightening. Thank you for this topic.

Well written article and strangely eerie / unnerving to see pictures of the explosion of that Lancaster bomb in the 21st century.

Hi, in your story there is a picture of a bomb with the caption “German-made, but with a Soviet fuse”. Curious how did a German made bomb with a Soviet fuse end up in Germany?
There was a very good TV show called “Danger UXB” about unexploded bombs in London.

@zrohit, authorities think the Red Army was re-using captured German bombs as they advanced on Berlin, arming them with their own fuses. Thanks for reading!

I will report to related parties