What Iconic Restaurant Defines Your Neighborhood?

Whether it’s that stalwart hole-in-the-wall eatery that’s been around for as long as you can remember or a unique food stop that speaks to the dominant local culture, most neighborhoods have one restaurant that stands as a symbol of the area. Now we want to hear about the iconic restaurant that defines your area! 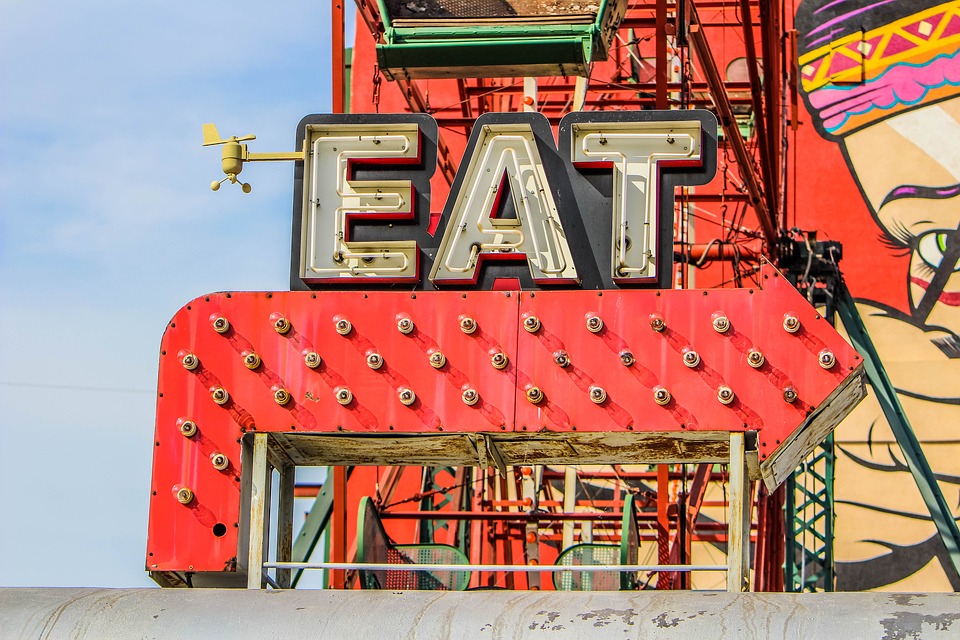 Atlas Obscura is based out of the Brooklyn neighborhood of Greenpoint, and we’ve long had the pleasure of being located just down the street from what is arguably the most iconic restaurant in the neighborhood (in my opinion), Karczma. Greenpoint has long been home to a large Polish population. Karczma, opened in 2007, is certainly not the oldest restaurant of its kind in the area, but for my money, it’s one of the best. It bears the local cultural influences everywhere from the faux-peasant decor to the traditional fare. Pickle soup forever.

In the comments below, tell us about the iconic restaurant that defines your neighborhood, how it relates to the local culture, and what you like to eat there! Your response may be included in an upcoming round-up on Atlas Obscura. The flavors of an area can often say more about its history than any monument.

For Germantown Ohio the Iconic restaurant is The Florentine Hotel, Ohio’s second oldest inn, established in 1816. While it no longer acts as a hotel it is still restaurant.

It’s a little reckless to call a single restaurant representative of a neighborhood as storied and diverse as Manhattan’s Greenwich Village, but for my money it’s Gene’s (73 W 11th Street) and its white tablecloths, tuxedoed waiters, and nightly regulars. 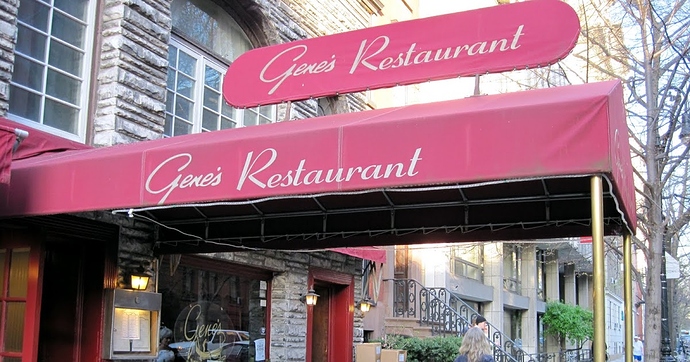 By Mitch Broder The main thing I knew about Gene’s was its claim to have opened in 1919, which I understood to limit my chances of having ...

As you’ll notice in the writeup above, Gene’s was founded in 1919, so is celebrating its 100th anniversary this year.

My wife and I have gone to Gene’s once or twice a week for the last seven years, so probably at least 250 times. So maybe it’s just the restaurant that defines us. Regardless, it’s our favorite.

Rhode Island has a massive foodie culture but one of the classic places to eat in the state is Iggy’s Doughboys and Chowderhouse in Warwick’s Oaklawn Beach neighborhood. The chowder has been on national TV for the best in the country. The clamcakes are deep fried bundles of goodness. And it’s three steps from the beach. Summer isn’t a thing without half the state making a pilgrimage.

In Forest Hills - at least the southern part of the neighborhood, it’s gotta be Eddie’s Sweet Shop, which is the oldest surviving ice cream parlor in NYC: 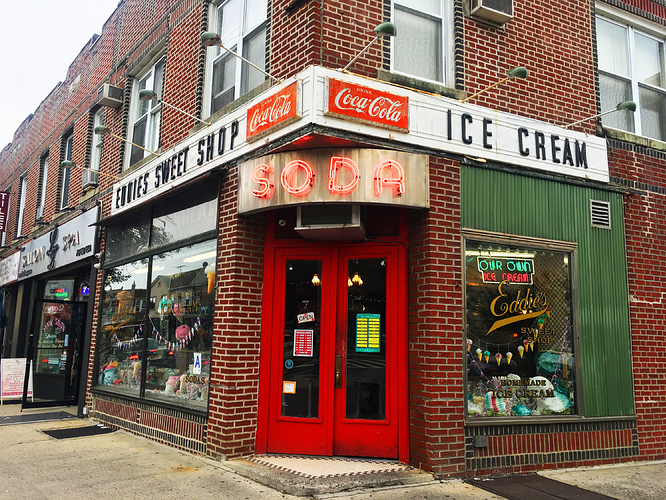 Thanks to its homemade ice cream, toppings and a sprinkle of old-school charm, Eddie's Sweet Shop continues to deliver some of the best treats.

I used to live in Hyde Park in Chicago, and there are two restaurants that define the neighborhood for different reasons.
The Medici is very representative of the University of Chicago aspect of the neighborhood: artsy, intellectual, every surface covered in visitors’ graffiti. Their milkshakes are legendary among UChicago students, especially the Mexicana flavor.
Valois is a long-standing institution and its clientele is more representative of the neighborhood as a whole. Super cheap breakfast/lunch food served cafeteria-style.
Fittingly, these are also former Hyde Parker Barack Obama’s favorite spots in the neighborhood (whenever he’s in the area, people stake out Valois because they know Obama will swing by for breakfast).

Now I live in Chicago’s Uptown neighborhood, and while it’s technically only a bar and doesn’t serve food, the Green Mill jazz club is an Uptown icon. There’s been a lounge on that spot for a century, and it used to be one of Capone’s hangouts. Its bright marquee is an instantly-recognizable symbol of the neighborhood. 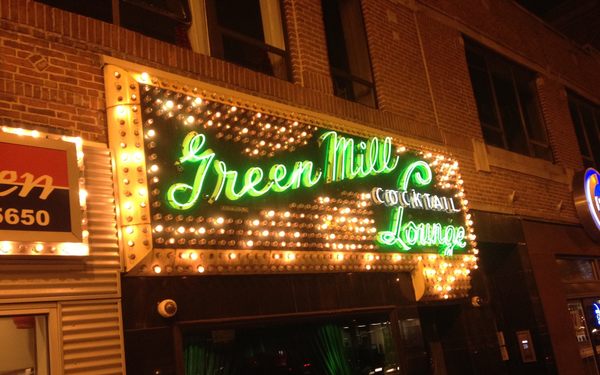 A century of world-famous musicians and American mobsters alike have rolled through this club.

Salem, VA - The Oi Boy Punk Rock Diner on 6th Street. They serve several iconic sandwiches and burgers that were served in two local restaurants (Kenney’s and Lendy’s), that have been defunct since the 80’s. The building itself has been in almost continuous operation as a diner since the late 50’s. 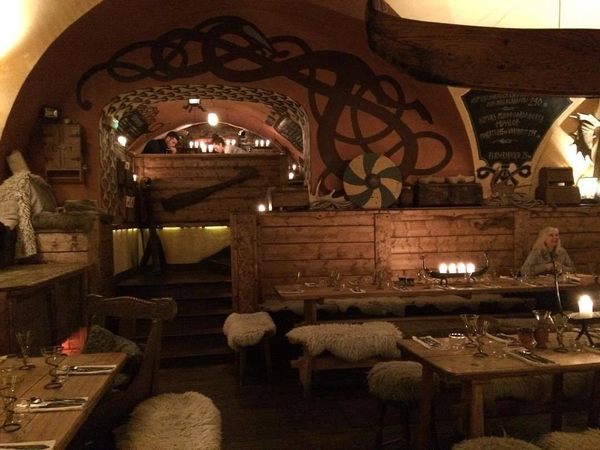 Dine on food tied to Viking history and legend at this subterranean Stockholm spot.

The oldest restaurant in my city (1929) is just around the corner from me - It’s an adorable diner that still has some of the original decor (in that location) from the 40s/50s. It’s a must see for anyone visiting Toronto, their food is amazing and they have the BEST breakfast. It’s a little pricey nowadays because Elton John goes there sometimes, but totally worth it. 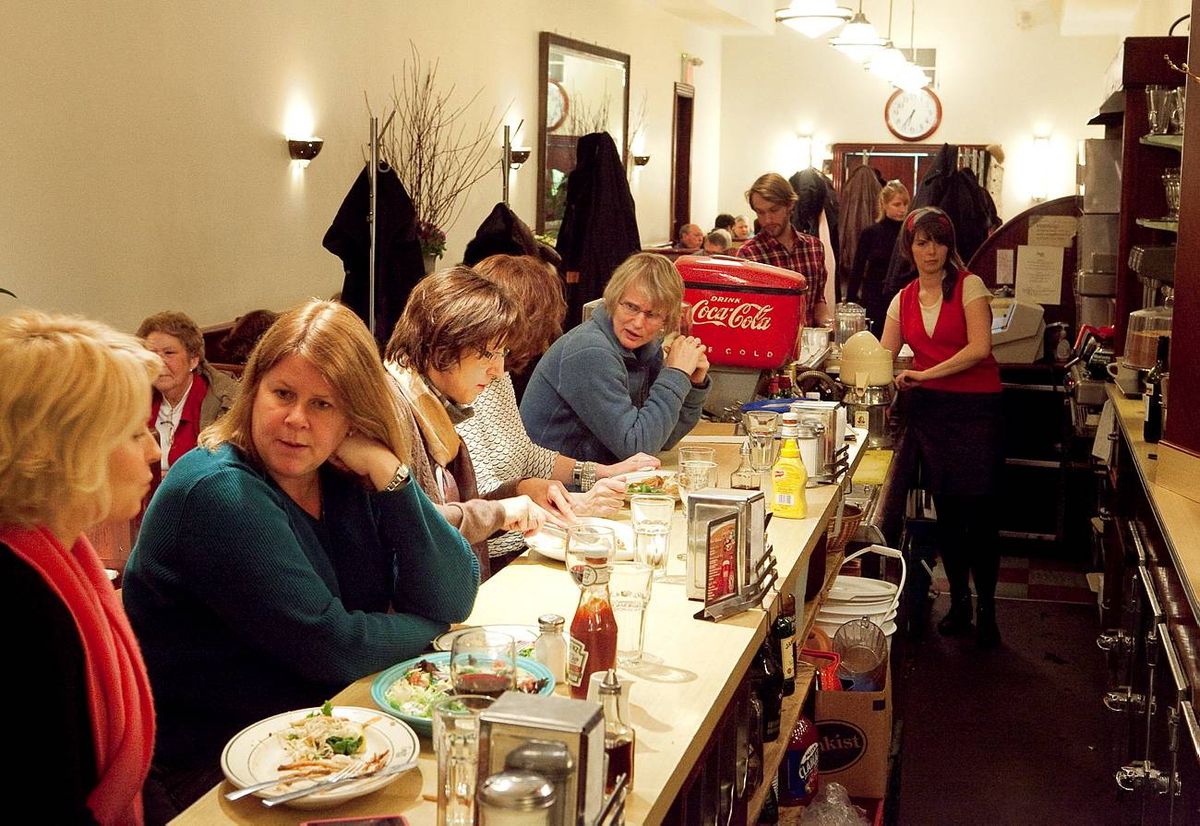 A master of fine dining makes the Senator a finer diner

They recently renovated the upstairs area and now it’s an art nouveau winebar. It’s stunning and the food is just as good.

Day By Day on 21st and Sansom in Philadelphia. Old school neighborhood place with fabulous “Home baked” desserts. Always lively and filled with all ages, ethnicities, etc. Close enough to Penn and Drexel to attract a lot of students but also near some senior housing so there is really a mix. Oh and the food is very good; sort of like home cooking if your mother was a really good cook.

As far as iconic restauraunts in Savannah, GA go, The Olde Pink House is probably among the oldest AND one of the most popular among tourists and locals alike. Built for James Habersham Jr in 1771, it spent some time in the early 1800’s as various banks. I couldn’t find any info on how long it’s been operating as a restauraunt. At the moment it’s recovering from a Christmas tree fire in the ballroom that occured recently, and the service community here has really come together to help them get back up and running. It’s said that Habersham still haunts the mansion ever since he supposedly hung himself in the basement, but even still the piano bar down there is pretty cozy. 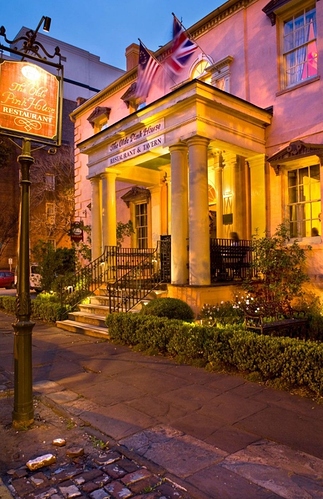 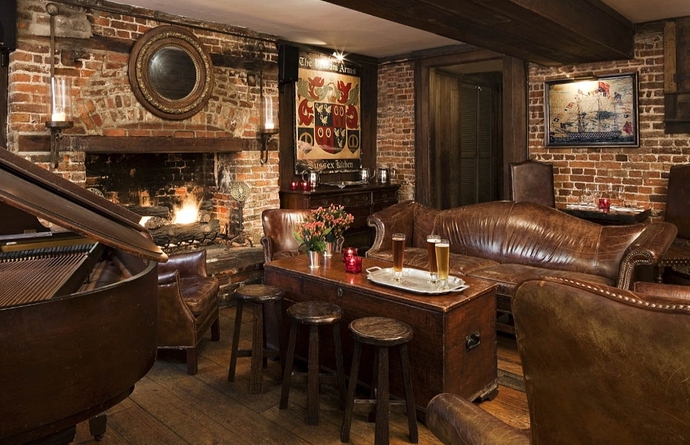 The Strawberry Lodge in Strawberry Arizona was pretty iconic. In such a small town, it was one of the few places to grab a bite, but after they closed the road to Fossil Creek it went under.

I’ll always remember how excited I was to get Mickey Mouse pancakes and hot cocoa there.

Salina, KS - The Cozy Inn. It’s not an original response (every other list of dives and diners includes this place), but it is true blue Salina. As they’ll tell you, the tiny burgers are prepared on the same 95 year old grill used since the restaurant opened in 1922. All onions, no cheese.

Cafe Karpershoek, Martelaargracht 2, opposite Central Station in Amsterdam. Been there since 1606. What we Amsterdammers call a “bruine kroeg”: dark brown interior, wooden floor, low ceiling and relaxed atmosphere.

The Tiki Ti on Sunset Blvd in LA is one weird and wonderful place. Run by a second generation bartender, a lot of the staff has been there since the 70s and the place hasn’t changed a bit. You won’t be disappointed by the lovely tiki drinks, wacky curated object collection, and great Hawaiian shirts. Want to take the weird and the kitsch up a notch? Visit on Halloween! It’s a blast.

In Racine, Wisconsin one of the most iconic eateries is Kewpee Sandwich Shop (or sometimes called Kewpee Lunch). It is a classic 50’s style diner known for its affordable breakfasts and irresistible and modestly priced cheeseburgers. And it has a Kewpee doll theme. The wait staff is brusk but efficient and the food is quickly served, is quite tasty and won’t break your bank. 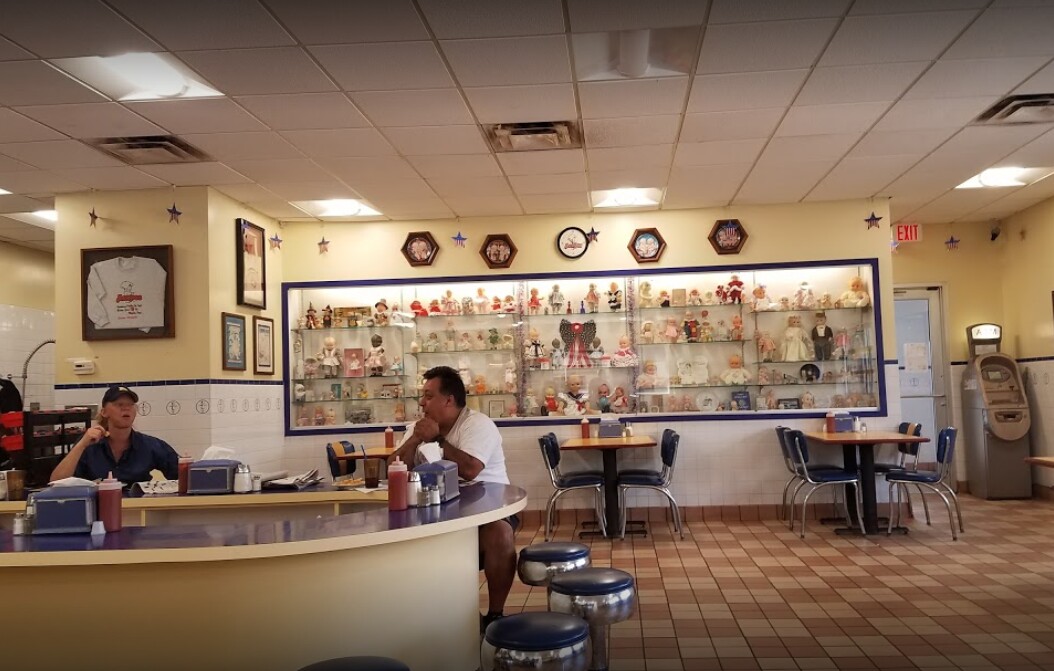 The Buckhorn Exchange in Denver, Co - which has liquor license Number One in the State of Colorado, was founded on November 17, 1893 by Henry H. “Shorty Scout” Zietz. A National Historic Landmark and Western Museum, the Buckhorn is an experience! The founder, Zietz, got his nickname from Chief Sitting Bull. Five US Presidents (inc. Teddy Roosevelt), Princess Anne, Jack Kerouac, famous astronauts and hundreds of Hollywood legends have all eaten here. Mounted all the walls everywhere are over 500 taxidermy birds and animals (so this is not a restaurant for the faint of heart). On the menu are a wide assortment of game (some exotic) and seafood. And live entertainment four nights a week for your dining pleasure - cowboy songs and singalongs! 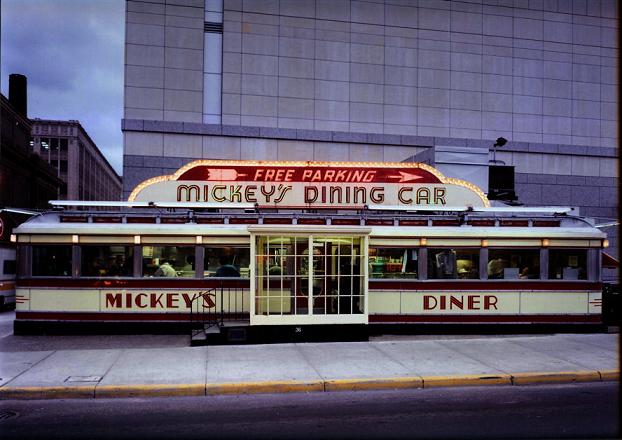 Mickey’s Diner has been featured on the Food Network series Unwrapped, Roker on the Road, Rachel Rays’ Tasty Travels, and Alton Browns’ Feasting on Asphalt.Mickey’s has appeared in The Smithsonian, National Geographic, Sports Illustrated, Easy Rider, Playboy and Elle magazines. Mickey’s Dining Car has been replicated as a collectible by Department 56, The Danbury Mint and Saks Fifth Avenue. The Mighty Ducks I, II, III , Jingle All the Way and A Prairie Home Companion movies contain scenes that were shot on location at Mickey’s.

It was placed on the National Register of Historic Places in 1983.

I work just five blocks away from Mickey’s.

In Springfield, Massachusetts the iconic restaurant is the Student Prince and Fort, a bastion of German cuisine that now has an updated menu. This is the place to be seen in downtown, a political hub with a popular bar. Restaurants come and go, but the Prince has been here since 1935.