Avengers: Endgame comes out today, and as a huge fan of the Marvel Cinematic Universe and comic books in general, I’m very, very excited. While I’ll be going to see the movie later today (jealous?!), it’s brought to mind the comic book stores that originally sparked my lifelong fandom. So let’s celebrate that most wonderful and dorky of small businesses, the comic book store, by sharing our absolute favorite comic shops. 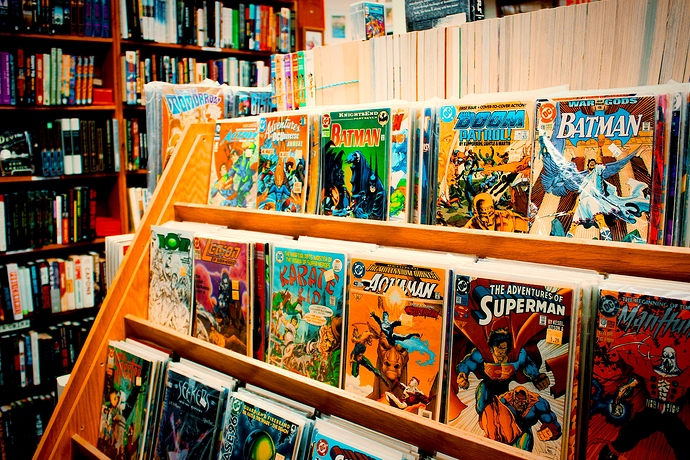 As an awkward, semi-troubled youth, the comic book stores of Salt Lake City became like my home away from home, places where I found community and camaraderie with the only other people I knew who read Sandman. My home base was a place called Dr. Volt’s Comic Connection. Located in a tiny strip mall storefront, it wasn’t the biggest shop in the city, but it felt like it was uniquely mine. Over the years, I got to know the owner, John, who welcomed me in, and let me go behind the counter and even help work the register sometimes. He turned me on to new and experimental titles like Hellboy (this was the late 90s) and Preacher and Strangers in Paradise. At Dr. Volt’s I felt less strange and isolated than out in the rest of the world. Even today, though I don’t recognize anyone working there, it still feels like a special, secret place.

I collected trading cards of comic book characters as a kid, and my favorite place to ride up to with my Dad was Newbury Comics in Amherst, MA. Amherst is the quintessential New England college town, which lended the local Newbury a special feeling that today I guess I’d call “subversive” but then, as a 9 year-old, felt like all the moody charisma of your friend’s cool older brother embodied in a storefront.

Crescent City Comics in New Orleans is a fun little shop. I bring my 12 year old there occasionally but he has expensive tastes and tends to want the bound editions (and my credit card.) I went there recently because he needed a D4 die for a school project. Amusing to watch the employee dig through a bucket of dice looking for the right one.
http://crescentcitycomics.com/

Have to put two up here. First isn’t open anymore and was Ski’s Teases and Vintage Collectibles in the States in Athens, ohio. The second is the world’s oldest comic store that has stayed in business continually and that is FANTASK in Copenhagen, Denmark. In both cases it’s the people and types of stuff they carry.

Wonder Book and Video! As far as I know, they still exist all over Frederick, MD. Back in the 90’s you could rent vhs tapes and dvds, as well as buy new and used books, comics, and music. The shelves were dusty and filled to the ceiling, and the staff was knowledgeable. @EricGrundhauser you brought back fond memories of discovering Hellboy, Sandman, Strangers in Paradise, Kabuki, Bone, and others.

The American Comic Store, High Street, Chatham, Kent, England is my favourite FLCBS. It was where I got introduced to early DC Vertigo back in the days it was edgy and cool. The Sandman was in full swing, and short prestige series like Toxic Gumbo were being produced when few of the larger publishers would dare put out such creator owned titles. It is a quintessentially small English comic book shop, wiyh a floor you can walk across in three large steps. What makes it special, most of all, is how helpful the owner is. Recently I got into Lady Mechanika and he sold me a whole pile of back issues for a mere tenner (£10 or about $12.50). And if he hasn’t got it, he’ll try his vest to source it for you.

Alter Ego Comics in Lima, OH. A haven for geeks in the middle of nowhere

Isotope Comics in San Francisco is my go-to, or more specifically, my Euro comics fanatic spouse’s go-to. The thing about Isotope is that the space is incredibly welcoming to people from all walks of life, no matter how they identify. You can tell how intentional that is when you walk in, and the diversity of the selection and the store’s really cool, inclusive staff is a big part of why I read comics now. Because I really didn’t until I started going in there!

Shout-out to my local branch of Travelling Man in Manchester, UK. The flagship store is in Leeds and I’ve heard that’s a bit special. As for my local, it’s small and I grow evermore dismayed that the number of comics and graphic novels on display are declining. I know that there are industry reasons for this and the store’s emphasis is increasingly on board games and tabletop gaming, which is fair enough.

Regardless, though, it’s my favourite comic book store because of its colour, its sense of inclusiveness and the friendliness of the staff. I always pop in whenever I get chance and I look forward to Free Comic Book Day every year in particular!

Heroes and fantasies in San Antonio. Always comfy, always solid. Old and new location have always been my go to

AH! I almost forgot about Bone! I got a sketch from Jeff Smith at the first San Diego Comic Con I ever attended in like 2002? It was one of my prize possessions, but regrettably the notebook got lost…

House Of Secrets in Burbank, California. The favorite for employees of Disney, Warner Bros, Nickelodeon, DreamWorks Animation, Cartoon Network, Universal and so many more. Good people who know how it’s done!

On a side note anyone wanna guess how to pronounce Lima, Ohio ? Lēma, Līma or Lema. Good luck😉

It’s probably been gone for decades now, but in my youth I would regularly frequent R&B Comics in Montgomeryville, PA. It was on a corner across from the shopping mall. Those rickety white doors with the paint perpetually peeling away were portals to another world, one that I would spend just about every Friday after school totally immersed in. I’m not sure what my early teen years would have been like without that place, but they certainly would have been different.

Living in Seattle meant frequenting Golden Age Collectibles, but that’s a shop more for the tourists than anything, I think. When I finally found a comics title that I was interested in, they didn’t have it. Neither did the comic book shop on 3rd or on Capitol Hill. In fact, these last two hardly gave me the time of day. They did not seem to care that I was a potential customer (even though I was the only one in the store!). I’d resigned myself to paying shipping when I stumbled across Outsider Comics and Geek Boutique in Fremont, just a bus ride away. Not only did they have the title I was looking for, they were aghast that none of the other shops I’d tried had offered to order it for me.

The irony is that while (aside from Golden Age) my experiences with the other shops left me feeling like an outsider unwelcome in the community, Outsiders made me feel at home. Not only did they actually have the titles I wanted, they set up an account and put aside future issues for me, easy peasy. And they made it clear that if I wanted a title they didn’t have, they’d get it for me.
If not for Outsiders, I would have probably given up the comic book shop scene altogether. Why go someplace you feel like you’re not welcome?

I think that the folks at Outsiders had dealt with the same problems that I experienced at the other shops and that’s what made the difference. They didn’t want anyone to have those bad experiences and it really showed in their customer service and the general atmosphere of the store. It was truly inclusive.

Oof. That didn’t look so big in the preview window.

Gatekeepers suck! Glad you found some awesome shops to keep you engaged!

I love a welcoming comic shop! They really should be a place for outsiders to be among other outsiders.

Press alert: I’ve just been informed that Savannah has TWO new comic shops opening on May 4th. Odin and Sons near my favorite square downtown, and Neighborhood Comics and Books in Starland, which is dangerously close to my home and work. Such a bounty!