Zotz Cave in Campeche near Calakmul

Some years ago I’ve been to Mexico and on a road trip to some Maya temples. On the way to Calakmul we spent an evening at a bat cave in the jungle, it’s called Zotz Cave. More than a million bats live in a hole in the ground and come out every night - what a spectacular moment. I wrote about that in my german travel blog: https://fernwehblog.net/mexiko-fledermaus-wahnsinn-im-batman-style/ 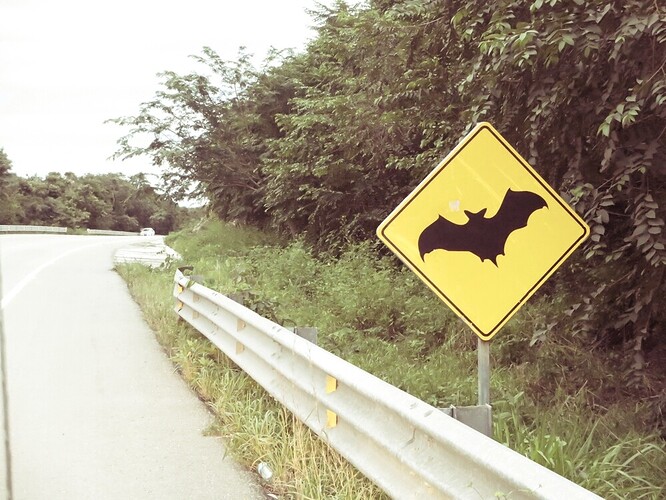 Why not share it as a written entry on the Atlas ?

I took a look at the blog but as I’m not a German speaker I wasn’t able to understand what you wrote but the pictures you took of the bats leaving the caves were excellent!

There was even a Mayan bat god in the cosmovision of the ancient Maya called Camazotz who featured in many mythological stories and there some fascinating sculptures of this diety in museums in Mexico and Guatemala.

Pretty cool, I didn’t know that about the word Zotz. Thank you!

Impressive shots of the bats! Google translate seemed to do a good job with your blog–my German is way too rudimentary to follow it otherwise!

Looked at some of your other entries and just wanted to comment that there is more to Nevada than Vegas! (Speaking as someone who is as close to a native Las Vegan–and native Nevadan–as you’re likely to find

Hey, thanks for sharing this!

I can see that your post is from 2014. Just visited Calakmul at the end of February, didn’t get to see the bat “volcano” (which is what it’s often referred to as now) though.

Covid does seem to have people a lot more aware of bats as disease vector carriers, so I wonder if going to the cave was as restrictive for you as it is now. What the guide explained to us is that, in addition to having to be at the cave very early, you also need to take an additional change of clothes as well as head protection for any guano.

After you’ve seen the bats, you’ll have to take off your clothes and change into the fresh ones. The “bat clothes” are then either kept in a locker until you leave or you have to carry them with you in as airtight a container as you can (I’m guessing a bundle of 3 plastic bags tied real tight or something).

I basically skimmed over the conditions for the bat cave tour, and my memory of what the guide told us in person is vague, but still something that future visitors might want to consider.

Thanks a lot! I would love to see more of Nevada, but on my 40th birthday in 2013 I was only 2 nights there as a stopover to Hawaii.

That is interesting what you mention about the change of clothes and head protection to visit the cave.

I definitely agree with what you mentioned about the post-COVID public being somewhat more aware about bats and the potential of spillover of zoonosis from close contact with these animals.

I haven’t been to this particular cave in Mexico but have worked with bats a bit in the past and can offer some reasons as to why clothes changes may have been required.

In some caves in the tropics (and in temperate regions ), it is strongly recommended to wear a mask for respiratory protection.

However, this isn’t really related to the risk from viral infection but more because the spores that can be found in the dropping of bats can under certain circumstances infect the lungs and cause some really nasty cases of histoplasmosis.

There is a fungus that in recent years has caused mass mortality of bats through a disease called white-nose syndrome which was spread around a lot of cave systems in North America through cavers unknowingly carrying spores of the fungus on the soles of their boots and equipment (theorized to have come from Eastern Europe where bats are natural carriers of the fungus and have developed a greater degree of immunity to it whereas North American bats have not evolved to cope with it and so the effects are very deadly and survivorship very low).